As choruses go, the Choral Society of the Hamptons, which forwent a spring concert this year in order to allow enough rehearsal time for its concert of the Bach B Minor Mass on June 27, has gotten better and better. Now, under the heartfelt leadership of its longtime music director, Mark Mangini, and with its ranks expanded by the members of his New York City Greenwich Village Chamber Singers, it’s ready for Bach.

Is Michael Bloomberg is taking cues from the Trumpian style of public speaking? Departing from prepared remarks last Thursday, he briefly riffed on his negative view of the Shinnecock Reservation, which is near his Southampton vacation house, calling it a disaster and a bunch of other things better not repeated.

‘What was the book where the bookcase fell over and killed the guy?” I asked Mary one day recently after having banged nails somewhat haphazardly into the shelves of our living room one that had become bowed out, thus rendering precarious one of our stores of knowledge, much of it having to do with cookery.

Long ago and far away, back when I was an eighth-grader at Horace Mann Elementary school in Bayonne, N.J., I was given an aptitude evaluation and tested high for “persuasion.” I don’t remember what methods they used to determine what our defining character traits were — traits that might indicate what lines of work we were best suited for. But I do remember that my own defining characteristic was this one, slightly poetic, word.

There is nothing like a good, old-fashioned global panic to get people moving on an important issue like climate change.

I’m living a life of quiet desperation at the moment, for nothing is hoving into view on the sportive horizon. I have, as Georgie and her peers say, reached out, though no one thus far has reached out to me. I guess I’ll go on reaching out. Surely something (or someone) will turn up. . . .

Almost everyone paying attention knows the Lehman family went from rags (in their case raw cotton) to riches and then collapsed into bankruptcy in 2008, dragging the national economy with it.

For the third week, I have had an article in the paper about East Hampton’s history of slavery. This is part of a much larger project started about three years ago to identify every enslaved person who ever lived in the town.

“Without some understanding of Puritanism, and that at its source, there is no understanding of America,” Perry Miller said in the foreword to “The American Puritans: Their Prose and Poetry,” a little book I’ve long had around, but have, until now, never read. 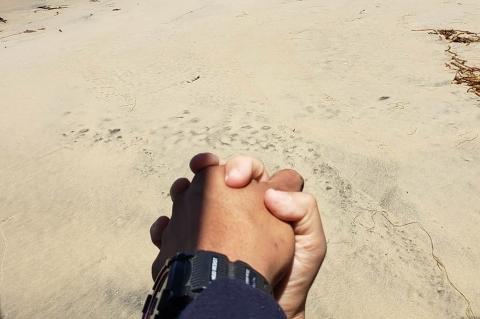 Relay: For Diego
By
Christine Sampson

My close friend Lisa sobbed in the doorway of her apartment last Wednesday night, and the only sustenance I could offer her was a warm embrace and some of my mother-in-law’s homemade chili. Even so, it felt inadequate and I started to cry, too. The chili was hot and hearty, but we, distraught over the death of a friend, could barely taste it.

I was the age some of my grandchildren are today when “Cover Girl” won the 1944 Academy Award for best music scoring in a musical picture. The film was in Technicolor, which was new and exciting. Given the plethora of distinctions by which Hollywood awards are given out, I suppose it wasn’t surprising that a different film won best musical picture that year and that although the cinematography was nominated for an Academy Award it did not win that one, either. Today, aficionados consider “Cover Girl” one of the most lavish and successful Hollywood musicals ever.

There is something special about splitting wood. You get a likely billet somewhere, stand it on end, and bring a wedge-shaped maul down hard into the end grain. The force pushes the log fibers apart, as a crack hisses away from the impact. One or two more swings, and the log falls in two.