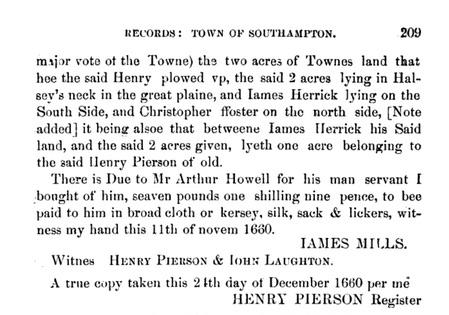 Two hundred sixteen years ago today, a woman enslaved by Samuel L’Hommedieu in Sag Harbor gave birth to a boy. We know this because of an entry in the Southampton Town records when L’Hommedieu gave over responsibility for the child, then named William, after his first birthday. L’Hommedieu had been a Revolutionary War captain in the New York Militia and, after the war, returned to his livelihood making rope and ship’s rigging. I have seen no record — yet — of what happened to William.

L’Hommedieu is by no means the only person of his time to seek to offload enslaved people onto the towns in the waning decades of slavery in New York. In a period of painfully slow emancipation, enslavers were, under certain circumstances, permitted to hold on to their human chattel until 1827.

The family of Deacon David Hedges of Sagaponack was among the property owners who waited until the last moment before being forced to admit that “their” enslaved men and women were now free. According to a story his granddaughters told, the Hedges family Bible recorded the birth of “three slaves,” John in 1801, Vilet in 1803, and Kingston in 1805. These were all descendants of Deacon David Hedges’s first enslaved man, Adam, who had been brought as a child of 5 from what the family recalled as “the Congo.” The enslaved people outlived him; Hedges died in 1817. John, Vilet, and the rest were not freed until 1828.

Andrea Meyer at the East Hampton Library’s Long Island Collection pointed the Hedges story out to me only recently, even though a number of us have been researching slavery on the East End for about four years. Oddly enough, she noticed the account at the bottom of page 374 of “East Hampton History and Genealogies,” which my grandmother Jeannette Edwards Rattray wrote. Deacon David, I am sure, is some kind of relative of mine, though I have not had the time to sort out that particular branch of the line.

Just this week, I noticed another entry in the old Southampton records, this from November 1660. In it, James Mills promises to pay Arthur Howell for an enslaved man servant “seaven pounds one shilling nine pence, to bee paid to him in broad cloth or kersey, silk, sack & lickers. . . .” That was 361 years ago last month. Slavery here in the North runs deep, and we are just beginning to remember a sense of its true scale.