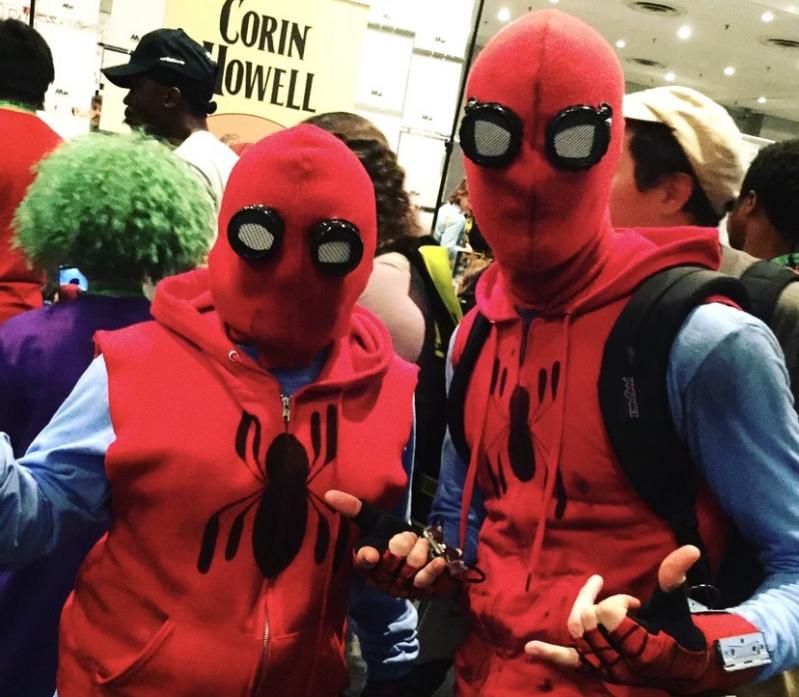 Griffin Greene, left, and a YouTuber he followed in their self-made costumes inspired by “Spider-Man: Homecoming” at the 2017 New York Comic Con.
Baylis Greene
By Baylis Greene

It's Spidey to the rescue — of cinemas. And just in time, before the hacking, feverish world backslides into another lockdown.

I don't know what's more encouraging, that an East Hampton theater was at full capacity on a December Thursday in a pandemic, or that we got one last cheering, clapping communal viewing experience — a two-and-a-half-hour respite of joy and light as darkness falls.

Aside from so successfully combining unprecedented hype with prescreening plot and cast secrecy, the powers behind "Spider-Man: No Way Home" couldn't have done much better in striking a balance between brawling and banter.

Action fans, you'll be pleased. But superhero nuts are a funny breed; they want character interaction as much as a plunging save from teetering scaffolding or a body slam that sends two grapplers through three floors of an apartment building.

I put it to my watching partner, my 16-year-old son, this way: Back when I was still a hard-core comic-book reader, 1980, an issue of The Avengers titled "Interlude" had the team just hanging around Avengers Mansion. Beast and Wonder Man play Ping-Pong and discuss the latter's failing acting career — he's seen on a kiddie program as a strongman getting a pie in the face (a plot point that the Marvel Cinematic Universe would be wise to pick up). Captain America walks the mansion's snowy grounds with Ms. Marvel — wooing her? She's Carol Danvers, Captain Marvel in the movies. He bounces his shield off a tree to block a neighborhood kid's snowball, to her delight.

And like that. It was not only memorable in its lack of action, it was a hit with readers, judging from subsequent letters to the editor. The new movie similarly, and just enough, hits on the appeal of superhuman beings sitting around, chewing the fat.

But yes, those readers of yore were indeed nerdy, maybe misfits, which from the beginning has been a part of the unusual fondness for Spider-Man, the teenage geek, the picked-on science kid, a bit of a loser, always a day late and a dollar short, a luckless Charlie Brown in crimson-and-royal Spandex, struggling as a freelance photographer, the crummy apartment with the leavings of his mac-and-cheese meal in the sink and at best a view of a fire escape.

A hero for hard times.