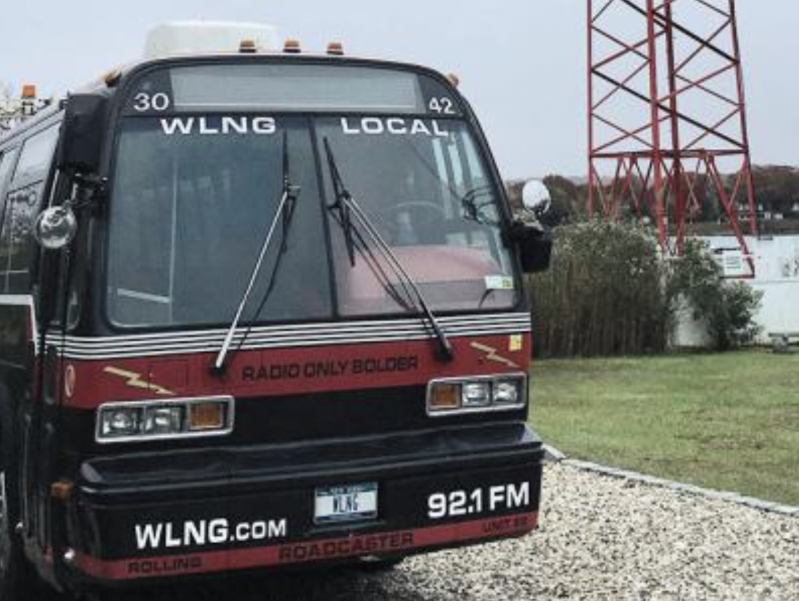 The Rolling Roadcaster bus — or, the "Mobile Unit," as it is still sometimes called by longtime fans of WLNG 92.1 F.M. — near the radio tower on the Redwood Causeway, Sag Harbor, in 2018. Johnette Howard.
By Bess Rattray

One of my earliest childhood memories — my only memory of the 1960s, actually — is sitting at the kitchen table in our toy-scattered house in the dunes on Napeague in the dim, gray light of a winter morning, staring into space and refusing to eat scrambled eggs as the insistently moronic children’s song “John Jacob Jingleheimer Schmidt” blared from the radio on the countertop. It was WLNG Radio, and my mother, who in this memory is standing by the window in a bathrobe, was tuned in to it, in that jingle-jangle morning, to find out if my older brother’s preschool day would be canceled by snow.

Radio seems to be surviving the advent of the internet, doesn’t it? Reading suffers, print media staggers, but listening goes on. I’m a radio person. You are or you aren’t.

Having achieved middle age, I do occasionally try to foist pearls of wisdom on teenagers, like an unwanted sampling of caviar toast on Christmas Eve, and one pearl I’ve been dispensing lately is this: that if you are weighed down by depression -- if the black dog is sitting on your chest -- you should force upon yourself a change of scenery. You can startle yourself out of the existential doldrums a bit by experiencing something new, however small and simple. You don’t have to sell your house or take a last-minute vacation to Portofino, or anything drastic. Just go to Chinatown and try pork-stuffed fish ball soup. Put on waterproof boots and march through the Nature Trail for no good reason. One failsafe, budget method for this easy-access self-help method of shaking off the mean reds is to turn off Netflix, stand up, go into another room, and tune in to a radio station from some other part of the world.

Because we out here on the East End are, geographically, part of the homogenizing super-urban sprawl of the Tri-State, it’s easy to imagine that the micro-regional accents and music styles of other places have disappeared, but it ain’t necessarily so. The GPS has freed us: Go on a road trip and follow your nose off the interstate, and you’ll hear a babel of novel D.J. voices and songs on local radio stations. I loved the soul-and-gospel sounds of WMPR of Jackson, Miss. (“Voice of the Community”), when I took my kids on a civil rights tour of Alabama, Mississippi, and Tennessee in 2019. One of the good things about the great homogenizer, the internet, is — paradoxically — that it has made broadcasts from small radio stations around the globe available to anyone with a modem. Try WEUP from Huntsville, Ala., or “Ralph McLean’s Country” on BBC Radio Ulster. Try the Vicar of Vintage, Your Dean of Deja Vu: Danny Stiles (“on your dials”), whose long-running “Music Museum” can still be heard on dannystiles.com, even though he died at the age of 87 in 2011.

Some folks leave their television on for company, but I like to have the radio playing as my companion. Different daily activities call for different stations. Driving around the South Fork on errands it’s WEHM (“Progressive Radio”); I like the choices of WEHM’s Harry Wareing, whose “Homestretch With Harry” airs weekdays at 3 p.m. Baking dark-molasses gingerbread men that no one in this house wants to eat but me on a dark December night it’s WLNG (“The Big Sound on the Sound”). Driving on the Long Island Expressway, I like “The Afternoon Ramble” with Brian Cosgrove from WLIW.

I’m particularly attached, sentimentally, to WLNG — “Emanating from a tall tower! The big signal!” — and relieved that its noisy-but-neighborly format hasn’t changed all that much since I first became attuned to it in “John Jacob Jingleheimer Schmidt” days. There isn’t a lot that’s stood the test of time here in Bonac; our culture’s been washed clean away by the in-migration of wealth and our proximity to the world’s greatest metropolis. But we still have The East Hampton Star, the lime rickey at Sip ‘N’ Soda in Southampton, and “Swap and Shop” (“you’re on the air!”).

Whoever is in charge at the East Hampton Regal Cinema, either foolishly or absentmindedly, has let the old phone number, East Hampton 4-0448 — in use for at least 60 years — get disconnected, but a listener can still call WLNG on its original number, 725-2300, to report a lost cat or sell a set of snow tires. There was a nervous moment when WLNG (“more oldies every half-hour!”) was purchased by the current owners in 2018, but they’ve kept it more or less intact. So the citizenry was upset when Hampton Chutney had to decamp from Amagansett Square, leaving the populace hungry for mango lassis and potato dosas? Prepare yourself for an actual riot of villagers if WLNG ever stops running “The Pet Patrol,” hurricane coverage, or snow-day announcements. The last of us will pack our bags and head out to the Carolinas, cursing all the way.

Liking or loathing WLNG — “blanketing the coastline!” — is a litmus test. I recall a particular incident in 1992 when I had an argument with a jackass in golf togs at a picnic on the beach at Indian Wells. It was a fine, warm evening and the surf was low. This jackass had been brandishing a fine French Epoisses de Bourgogne cheese — just a morsel of it, on a water cracker, and making a huge stink about how we all had to taste his expensive cheese. He made sure we all knew what college he had attended and then started opining about how WLNG was an assault on the ears of a sophisticate like him. So loud, so déclassé. I only remember this rather pointless non-anecdote because it was one of the first times I engaged an older adult as an equal in conversational combat. Wrapping a beach towel around my retro bikini, in a state of high youthful indignation, I briskly ran down a list of services to the community provided by WLNG and WLNG alone: No one else played non-corporate oldies, such as “God Didn’t Make Little Green Apples” or Nervous Norvus's "Transfusion." No one else warned you that rising water was overrunning the Redwood Causeway during a gale. No one else alternated 1970s hits such as Meatloaf’s “Paradise by the Dashboard Lights” with pre-Beatles hits such as Chuck Berry’s “Brown-Eyed Handsome Man.” WLNG was “more than just music,” I said, ice-cold in my debate logic (and suavely quoting a WLNG jingle). I left my opponent gasping on his picnic blanket.

The new owners of (“all hits, all the time!”) WLNG do air some of the classic jingles, thank God, but, in my opinion, not nearly enough of them. “More news any moment! More news any moment! More news any moment!” I'll admit these old-fashioned radio jingles are repetitive, and get on your nerves if you have a hangover. “Sports! Sports! Sports! Sports! All the scores and all the sports!” They are repetitive, resounding, and declamatory, but that’s probably half the reason I like them. Repetitive, resounding, and declamatory is the American rhetorical style. (If you don't know what I mean about American shouting and repeating, listen to Martin Luther King Jr.’s “I Have a Dream" or Walt Whitman’s “I Hear America Singing." Or the repeat-repeat-repeat riffs of “Too Much Monkey Business” and “Rocket 88.") The jingles of WLNG cheer me up when I fall into a seasonal-affective- disorder funk or catch the democracy-is-being-undermined blues.

Who remembers the singing-frog voice of WLNG’s “Double-Double Play” jingle?

Let’s go all the way,

We’re the place to be,

Such sweet harmonies. Such personality on our dial. Someone told me once, when I was writing my first magazine feature article lo some 30 years ago, that WLNG had almost single-handedly kept afloat a radio-jingle sound-factory down South somewhere. What fond and misty adolescent memories I have of Saturday nights and "the totally original deejay," Bob Aldrich. ("Bob Aldrich! There’s nobody else, nobody else but you!”) One Saturday night on a sleepover in the summer of 1980, at my friend Victoria Brown’s house on Springs-Fireplace Road, we phoned 725-2300 to request that Mr. Aldrich play Blondie’s “Heart of Glass.” He agreed to play Blondie, but quibbled with our choice: “Wouldn’t ya rather hear the new one, ‘Call Me,’ kids?” To quote Meatloaf: It was long ago and it was far away, and it was so much better than it is today.