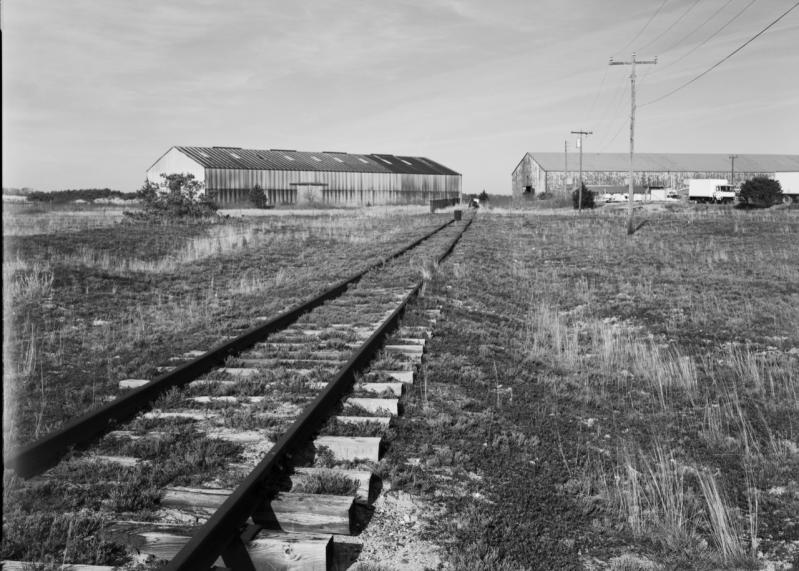 The so-called fish factory at Promised Land, c. 1990. It was run by the Smith Meal Co. in the 20th century. Robert J Mahnken
By Bess Rattray

Let’s go back, let’s go way back, to the mid-1970s. We lived down at Promised Land in a small house surrounded by beach plums and dusty miller, a pitiful-looking — in my then-opinion — gray plant with fuzzy leaves that — to me — encapsulated the melancholy of the lunar and lonely landscape of Napeague. Promised Land was like the wilderness of the Bible. Our house peeked out over Gardiner’s Bay at the front; the other side, the south side of Cranberry Hole Road, was a far-out geography inhabited by foxes, snakes, and shotgun shells. Star-shape plants with points like leather, and a central button filled with a dry gray powder that seemed potentially useful in magic, littered the ground of that bleached and sandblasted outback. Agonized pitch pines cringed in clusters, as if in anticipation of the bitter northeasters of winter.

In the off-season, there wasn’t another inhabited house for a mile in any direction. Our windows went shake and bang when the wind blew, and the wind was always blowing. The sounds of nighttime were the whippoorwill and a raccoon dragging his nails across the roof after midnight. At the bottom of what passed for a yard there were wild grapes. The driveway was white with the crushed shells of oysters and clams, a lot like bones if you thought of it.

We kids were the last generation of Americans to grow up not just without cellphones and internet, but without much adult supervision. We spent many long afternoons exploring this last uninhabited frontier of the South Fork. My brother had located a special dune crater, in the Promised Land outback, that you could drop into to find an arrowhead easily. Any time you wanted an Indian arrowhead, you just had to jump over the lip of this dune, settle yourself, and slowly scrape away at the sand streaked with bands of dark-purple iron oxide. No big deal. As many as you wanted. Time was porous. The past was right here.

When our colonial ancestors named this place Promised Land, was that sarcasm? Was it a joke — about the unlikeliness of finding salvation or fortune in this barren place? The humor of our forebears is generally lost on us; it is hard to say.

One year — and it may have been 1976, while her parents were building a modern house on the dunes just east of us on Cranberry Hole Road — my cousin lived two driveways to our west in the red house that used to be called the Lobster House, near the smokestack chimney that is (barely) still standing as an aid to navigation. She invented a game in which we cranked up “Last Train to Clarksville” by the Monkees and climbed out an upstairs window onto the tar-paper roof of the screen porch carrying a stock pot in which we had mixed together ingredients that we hoped might combine to be combustible: bird droppings, potting soil, dead flies pulled from the screen door, bathroom tile scrub, orange juice, spit, suntan oil. We called this Disgusting Stew, and threw it off the roof, hoping it would explode when it hit the ground. Things of all kinds were thrown off roofs in our childhood.

We wandered, collecting snakes that we’d bring home in a cardboard box. We would run, bent double like soldiers, and when one of us shouted, “Hit the dirt,” would launch ourselves vertical, our arms out like superheroes, and land on the ground hard, belly-first. Like all country children everywhere, we cultivated an imperviousness to pain. We were competitive about whose feet were more calloused and least sensitive to the scorching blacktop of Cranberry Hole Road in summer. We’d lift them to display our blackened soles.

Sometimes we’d follow the creosote-smelling railroad ties of the abandoned Promised Land railway siding, which was slowly vanishing into the sand like the Statue of Liberty in “Planet of the Apes," for about a half-mile to the fish factory, which sat — lingered, dwindled, vanished — in that melancholy landscape of scrap metal and box turtles with backs painted a spooky orange and black.

The fish factory still smelled of fish. The fish factory smelled like old fish, like antique fish, like the codfish Finnish people bury in their backyards after the last frost. You could never wash away this smell; it was permanent. The fish factory smelled like historical fish. My cousin and I would slink across the road and climb over the chain-link fence and run, feeling incredibly bold, to a sheltered place between the abandoned manager’s office, which was brick, and the abandoned warehouse, which was corrugated metal, corroded and red with rust. This was probably my idea, not hers.

I’d guess it was around 1976 or 1977 that a vandal painted “Bird Turd Disco” in huge white letters high on the wall of the fish factory’s old main warehouse.

“Bird Turd Disco.” What did it mean? My cousin and I understood what a disco was. We knew it involved powdered and smoked drugs, and knee-length Danskin wrap skirts prone to static cling, but was a Bird Turd Disco a fun thing or was a Bird Turd Disco a bummer? People said “turd” a whole lot more in the 1970s than they do today. (There was indeed much guano inside the giant sheds at Promised Land, and a great deal of broken beer-bottle glass.) Kids in the 1970s used the word “corroded” a lot, too. We used it frequently as a personal insult: “You’re corroded,” we’d say, suggesting that the object of the insult was in some way tainted with some sort of pox, leprosy, or venereal disease. We were also enamored by the word and concept of “polluted,” both as a derisive adjective — the girls’ bathroom stalls at the East Hampton Middle School were incontrovertibly “polluted” — and as a summing up of the state of civilization at large.

There was something dissipated, something corroded, in the air around the fish factory — not just the fish, but also something else decaying, something foul. Some sort of societal corrosion, and you could smell it. It was an earthy smell, like armpits.

The abandoned barracks at the fish factory were eerie as science fiction. We would wander through the long, low housing block, gray inside and out and compartmentalized into family accommodations, kicking at mildew-speckled mattresses and baby dolls left on the linoleum floor as if the inhabitants had fled in a panic. There was a teacup on the kitchen table, and a calendar nailed to the kitchen wall, by the door, showing a snow-covered bridge in Vermont and the date: June 1968.

We, the small tribe of Promised Land, were always on the lookout for treasure. I could not then and cannot now walk on the beach of Gardiner’s Bay without scanning the waterline for Captain Kidd’s horde. During one expedition into the grounds of the fish factory, my cousin and I did find treasure: not gold bullion or silver-and-gold embroidered Armenian silk pillaged from a grand mogul’s merchant vessel, but a pair of toy pedal cars that had been left behind when the fish factory closed and the worker’s families were forced to leave. You know the pedal cars that toddlers drive? These were ancient specimens of pint-size automobiles, with a bulbous hood, rounded like a hippo, and a bell to ring. Mine, as I recall, was a 1950s turquoise color, with rust holes you could poke your fingers through. I don’t remember what color my cousin’s was.

We were 8 or 9 — or 10 — and too big to squeeze into the driver’s seat, so we dragged the pedal cars home triumphantly by the steering wheel, and presented them as prizes to our parents. By this time my cousin had moved out of the Lobster House and was living in a newly constructed modern house perched perilously close to the erosion line of the bay. Her dad — my uncle — was an artist with a finely attuned aesthetic eye, and he said she could keep it. He spruced her car up and displayed it in the house as a Pop Art object, an emblem of corroded America, the lost prosperity of the Eisenhower years. My father, who had a keen aesthetic sense, too, but excelled at moral lessons, told me that it wasn’t mine to take. I had to drag it back to the fish factory in a state of high resentment, and leave it there, to rust and return to the earth.