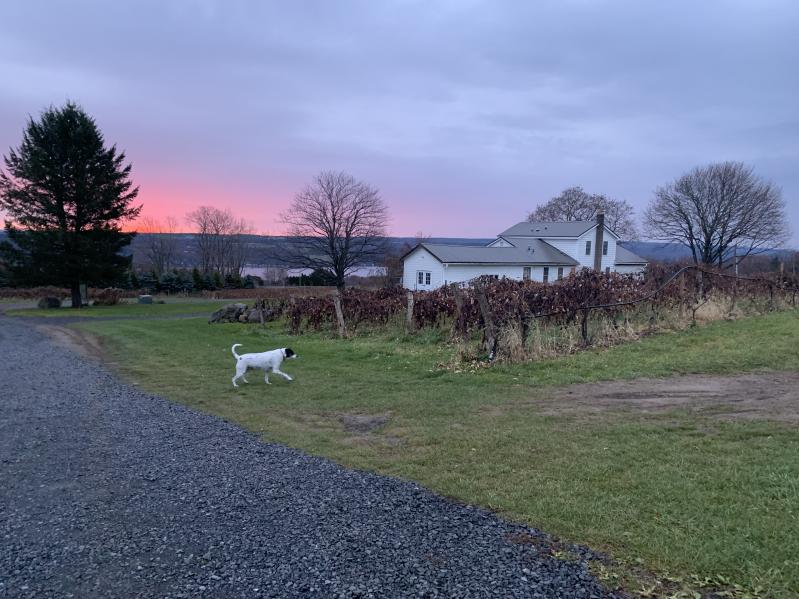 A Penn Yan farmhouse with Keuka Lake in the distance.
Julie Greene
By Baylis Greene

Funny that it took my daughter heading up and over to college in western New York for me to at last appreciate the state I grew up in. But then Long Island is pretty much its own entity, isn’t it — neither here nor there; strip-malled and New Jersey-like to the west, New Englandy in architecture and accent to the east.

Took me long enough. Greenes go back a ways in Orange and Rockland Counties, early enough for one of them to have been the foreman at the Sterling Forest iron mine and forge, where they made those giant chains that stretched across the Hudson to stop British ships in the War of Independence. Not the engineer, or the supervisor of the crazy project, or the owner of the iron works (who was a Townsend, of the Oyster Bay family of Raynham Hall fame). This was the guy with soot all over his face and hands.

The job stayed in the family for a while, I gather. One ancestor had a link stolen from his gravesite during the Great Depression, an impressive feat. You can see lengths of the chain on the campus at West Point — those things ain’t light.

The first Greene was a Huguenot fleeing persecution (that would be the good kind of Frenchman), changing his name for a new life in the verdant New World. Otherwise, an “early American hillbilly,” as my father used to say.

Of course, only a Long Islander would think Orange County is upstate, but upstate is my new favorite place to go. Southern Tier? Finger Lakes? How about Penn Yan, home to that industrious Thai immigrant community. Er, I mean that place settled by an admixture of Pennsylvanians and Yankees . . .

We were there for Thanksgiving, upstate again, and we were wondering, is it just good sense that keeps the old farmhouses preserved? Economic necessity? Is it that the vengeful clean sweep of money, bad taste, and historical ignorance is disproportionately let loose down here?

Zooming across the endless, Midwestern-style straightaways cutting through all that encouraging agriculture, you come upon town after idyllic town, a touch down on their luck but so often characterized by red-bricked Main Streets, something like Ray Bradbury’s Green Town, quintessentially American. And one after another, I’m sorry to say, they put even Sag Harbor to shame.

If that should’ve been obvious, it’s been eye-opening to me. Dansville, I made mental note of your 1921 movie theater, still in operation in all its faded splendor. You’re next.

Free Car Seat Checks in Southampton
Battle of the Books, and More Fun for Teens
This Week's Happenings in Montauk
END_OF_DOCUMENT_TOKEN_TO_BE_REPLACED