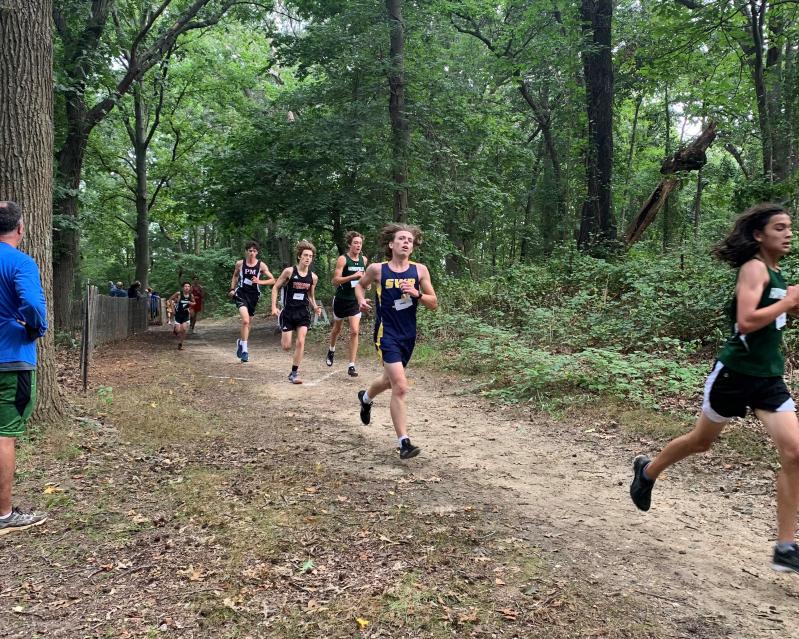 It was the most interesting conversation I’ve overheard in a while. Involving teenagers? Maybe ever.

“They didn’t like the trip I took to Florida.” There followed a line I couldn’t make out. “They said I wasn’t welcome back. They were severing all ties with me.” I think she was talking about Walmart. “They actually called me into work just to say that to me. I was, like, whatever. I just walked out.”

“You should come to Target.” This girl I managed a glimpse of — black hood of a Sachem High School cross-country sweatshirt pulled up over blond hair; cheeks flecked with acne, but we’ve all been there, give it time.

“I’m in G.M.” General merchandise, I gather. “I basically put shit away. Sometimes box stuff up. It’s not bad.”

But just as it was getting good I was called up to the window of the vendor’s trailer to make my purchase — this year’s Section XI State Qualifier T-shirt, long-sleeve, light blue, silhouetted figures mid-stride. One of the better ones. A souvenir for my son, one of the competitors.

It’s always a fine time at Sunken Meadow State Park, its untold acres of paved parking flanked by some — let’s face it — unlikely mid-Island natural beauty: a placid Long Island Sound beach complete with boardwalk on one side, and babbling Sunken Meadow Creek on the other. And were those bullhead catfish I saw schooling Friday as I crossed a footbridge in pursuit of a gang of runners? The planks were so holed by spikes it seemed a hundred woodpeckers had descended to do their worst.

Just south of the creek rise the hills up which runners grind it out over gravel paths snaking through woods dotted with campsite grills that seem left over from some forgotten time of middle-class leisure. Maybe the 1970s, I thought to myself, and sure enough, as I hustled to the next viewing spot, I strode across a patch of dirt embedded with a small constellation of discarded beer can pull tabs, unheard of since about 1980.

Not exactly Proust’s madeleine, but not bad. Someone’s got to get up in there with a metal detector.

Meantime, I admire the pluck of those two teens in line for shirts. As a former clothier’s warehouse worker, a former midnight-shift stock boy at a Fred Meyer superstore out west, I wish them well. Better yet, keep running.