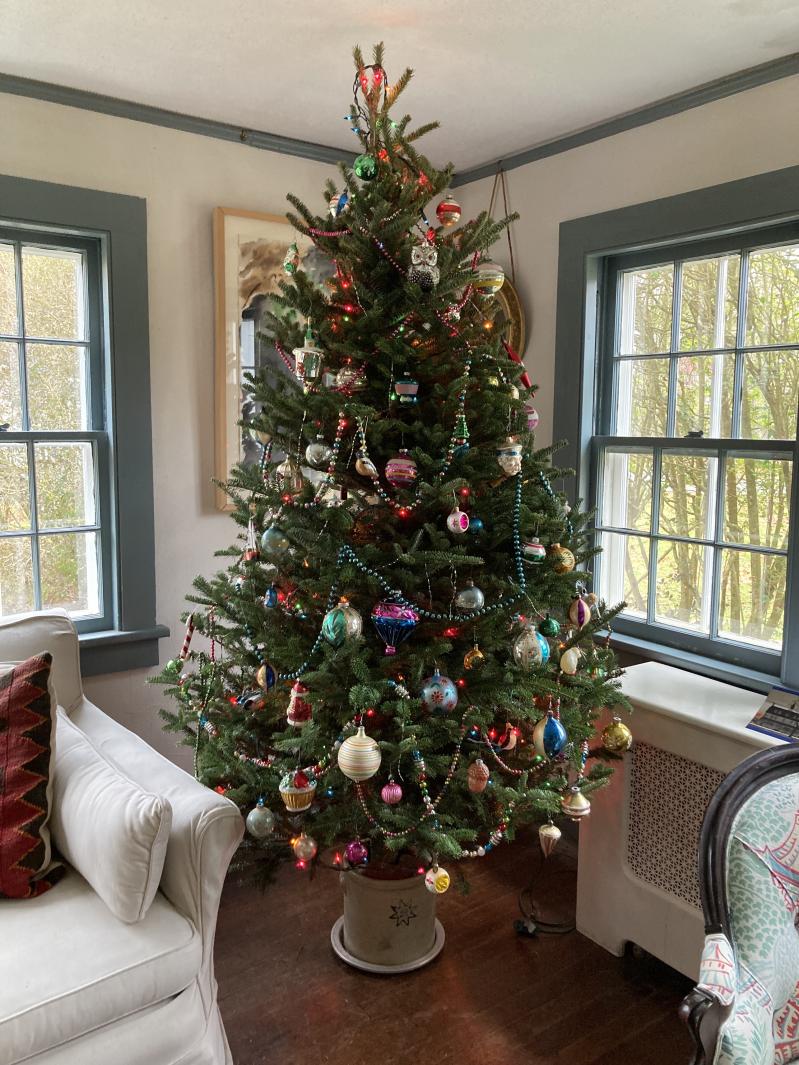 A fir from Vermont has taken the place of native white pine in the author's living room this year.
By Bess Rattray

The days grow short. The sun is fading, fading by 3 o’clock. Driving after nightfall on the Long Island Expressway to get a new mouthpiece for my son’s trumpet, he reports from the backseat that the winter solstice won’t come for another two weeks; it will get darker still. The snare drum of “Little Drummer Boy” plays on the car radio, and the neon lights of the liquor and lamp stores on either side of the highway at mid-Island — the cozy honkytonk of midcentury prosperity — flash by like beacons.

The older I get, the less happy I am about the dark afternoons. Sunset brings us down. We have to fight, fight against the dying of the light.

On Main Street, the holiday lights twisted up the lampposts give them a candy-cane appearance. The unspoken consensus around East Hampton Village seems to be that all-white holiday lights are “comme il faut” (as I like to say, pretentiously, borrowing the French spoken by Tolstoy’s Russian aristocrats in “War and Peace,” which I have begun rereading this winter, with visions of troika races, sleigh bells, and frozen soldiers of Napoleon’s Grande Armée in my head while I eat too many thumbprint cookies by the fire). The trees at the Huntting Inn, the fence at the white house by Town Pond, the blades of the windmills are all outlined in pretty white lights.

I persist in preferring old-fashioned multicolored Christmas lights — red, green, blue, and yellow — like those they still decorate the Christmas trees with in Bridgehampton. Multicolored is merrier. We need a little merry.

Faithful Star readers — readers of a certain age, sipping their wintry licorice tea and clucking over the distance that grows, that grows, that grows between them and the child they were when they slid down Mill Hill on a Flexible Flyer — may remember the scandale deluxe that erupted when The Star ran a poll some 30 years ago, or more, to determine which shade of holiday-tree lights the citizenry of East Hampton preferred here in the village. The poll was run out of our front office, with printed ballots and a ballot box decorated with wrapping paper. The choice was “sophisticated white,” “serene blue,” or “jolly multicolor.”

Jolly multicolor won the vote, and jolly multicolor was what the village purchased . . . over the indignant objections of those villagers who thought multicolored lights were a tad tacky. Writers of letters to the editor complained that the poll had been rigged, and that the person who chose the wording on the ballot — and that would be me, at the age of about 20! — had put their thumb on the scales with the biased use of the word “jolly.” The anti-jolly camp — the proponents of “sophisticated white” — also objected because the student population of Most Holy Trinity School on Buell Lane had been permitted by The Star to cast ballots, and the children, naturally, as children do, went jolly by a large majority.

And now, all these years later, I’d like to take unfair advantage of my position as a columnist to add a bit of editorial comment: Christmas lights, like Christmas wrap, should be a tad tacky. There’s no way to make electric holiday lights tasteful. It’s bad taste to try.

Just now, diving into The Star’s digital archive in an attempt to figure out what year, exactly, the tree-light fight erupted, I chuckled when I stumbled instead upon an earlier Christmas-tree-light controversy, reported in a news item in the issue of Dec. 19, 1940. It was the first time the trees were put up. "Forty lighted Christmas trees have been placed around Main Street, North Main Street, and Newtown Lane," the Star said, "the village board having the trees installed and the lighting paid for by local residents and merchants. In spite of the general appreciation of the lighted trees, the merchants are discouraged over the fact that so many lights have been destroyed by children. If the taking of lights is not discontinued the merchants say that this will be the last year that they go to the expense of having lighted trees for East Hampton.”

What bad children used to live here! What delinquents!

This was my father’s wayward and rascally generation. He would have been 8 that December, and allowed by his deadline-harassed, newspaper-editing parents to roam freely with a gang of mischief-makers who once upon a time, before most of our housing stock became seasonal, lived within walking distance of the stores. The problem of Bad Boys and Girls unscrewing the bulbs from the strings and smashing them on the hard-frozen ground persisted into my own childhood — high schoolers and middle schoolers rampaging down Newtown both committing sacrilege and creating a hazard to public safety. I never broke any bulbs myself, mind you. (Despite our fantasy of the past, the kids of 1940 were wilder, and the disciplinary system more gentle.)

Anyway, jolly multicolor is what we have on our own Christmas tree in the house here on Edwards Lane. Our lights are LED, so we can leave them on around the clock, until the tree is stripped and dragged naked outside on New Year’s Day. As much as I resist change — as unreasonable and wild-eyed as I am in my clinging to old ways — I’ve given in to the griping of my daughter and son, and our tree this year is not a white pine felled in the woods with a hand saw, but a Fraser fir purchased for an ungodly $90 from the Vermont-tree lot beside Par East Mortgage Company on Toilsome Lane. I was always proud of our white pine, boasted of clinging to that nonconformist tradition, but my zealotry when it comes to ornaments is such that the white pine’s delicate and feeble boughs couldn’t hold their burden gracefully. They bent under the weight of my over-large collection of vintage glass-bead swags and antique glass ornaments. The white pine’s Sad Sack, Charlie Brown appearance took on an even droopier, sadder aspect when fully dressed.

I love December, despite the shortness of the days, because of the quiet and softness of the landscape — the mouse-gray blur and burr of bare branches against a late-afternoon sky as tender-pink as a kitten’s tongue. It’s also the only time of year when we get communal singing, my favorite thing. I can barely hold a tune, but when many voices are raised, who cares? Carols are our true American standards: We know the lyrics because we’ve heard them over and over and over, piped in as the teller licks her thumb and counts out 20s at the bank, on WLNG as we drive home from a band concert in the dark. Contemporary America needs more carol sings, to carry us “through the rude wind’s wild lament and the bitter weather” (“Good King Wenceslas”).

The older I get, the more interested in trees I become. (Trees are the air we breathe, and the Earth is soon to suffocate, in case you hadn’t noticed.)

We’ve been told that the whole Christmas-tree thing was imported to Victorian England by Victoria’s German husband, Prince Albert of Saxe-Coburg and Gotha. So goes the received history. We’ve also been informed that our Christmas holiday rituals borrow from ancient pagan religions in which light and greenery were physical representations of the deities. The older I get, the more obvious it becomes to me that this is backwards: Christmas on Dec. 25 is not a Christian holiday borrowing decorations from the pagans, it’s a pagan holiday onto which Christians pinned their star. The wreaths and red berries, the beeswax candles, the holly, the evergreen garlands, the Yule logs . . . of course we primordially need to bring living green things indoors at the darkest hour, and of course we need a festival of light.

I plugged in our annual strand of white twinkle lights and hung it along one side of the kitchen ceiling, above the sink, on Thanksgiving Day and won’t unplug it until March 1. At dinner, we strike a match and hold it to the wicks of red candles in a wooden table-top carousel, and the heat drives the windmill paddles at top, and the turning wheel sets the little deer on the carousel going round and round; the smell of charred pine wood — lingering from a mishap in which the paddles caught fire — mingles with the smell of chicken and dumplings. Our consumption of tea rises dramatically, Harney and Sons cinnamon spice, and digestive ginger. Among the brass candlesticks on the mantel we arrange red-plastic battery-operated tapers from the Vermont Country Store. The balsam garland has been draped over the vestibule outside and a homemade boxwood wreath has been placed on the front door, but the garland lights, LEDs on an automatic eight-hour timer, will not behave: One side of the garland flashes on and off, while the other side fades in and out, a Yuletide malfunction that signals a portion of chaos within.

Free Car Seat Checks in Southampton
Battle of the Books, and More Fun for Teens
This Week's Happenings in Montauk
END_OF_DOCUMENT_TOKEN_TO_BE_REPLACED