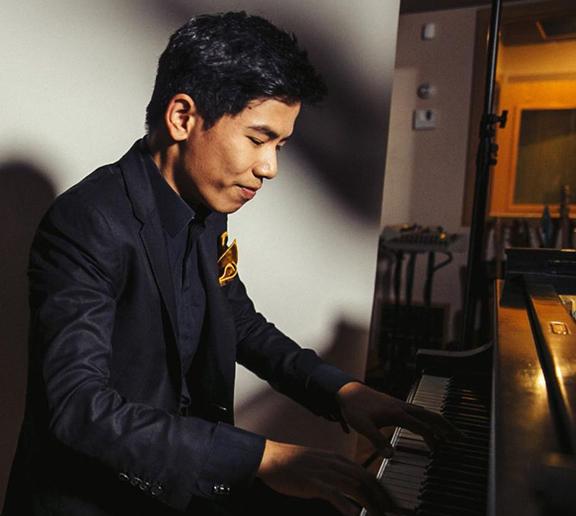 Zhu Wang will perform in the Rising Stars Piano Series at the Southampton Cultural Center.
By Mark Segal

Jazz at Duck Creek
The Caroline Davis Quartet is next up in the summer music series at the Arts Center at Duck Creek in Springs on Sunday afternoon. At 4, Ms. Davis and the Duck Creek community will discuss the role of gender throughout the history of Black American music and jazz. At 5, the quartet will perform a jazz concert.

A saxophonist and composer, Ms. Davis has been active as a side-person and leader in a diverse set of music communities, including jazz, improvised music, modern classical, R&B, and folk. Her recognitions include DownBeat Critics Poll Rising Star Alto-Saxophonist in 2018 and Chamber Music America's Performance Plus Grant in 2021. As holder of a doctorate in music cognition, Ms. Davis's compositions integrate music with the cognitive sciences, anatomical structures, and the brain.

Comedy at Bay Street
All Star Comedy will return to Bay Street Theater in Sag Harbor for its 14th season on Saturday at 8 p.m. The host will be Marion Grodin, a regular headliner at Standup NY and the Gotham Comedy Club. She has opened for Lewis Black, Judy Gold, and Robert Klein, and shared the stage with Jerry Seinfeld, Dave Chappelle, and Robin Williams.

When Sparks Fly
In 2001, the writer and artist Maurice Sendak and the Pilobolus Dance Company collaborated to create "A Selection," a contemporary ballet inspired by true stories of the Holocaust. Over the course of a year, the filmmaker Mirra Bank and her crew had total access to the film's subjects, including the principals' often opposing perspectives on the project.

"Last Dance," which will be shown at the Sag Harbor Cinema Friday at 6 p.m., combines rehearsal footage, interviews, Nazi-era footage, and performances into a portrait of the forces that drive the creative process when serious artists collaborate.

The screening will be followed by a conversation between Ms. Bank and Susan Lacy, the director-producer who created PBS's "American Masters" series.

Classical Piano
The Rising Stars Piano Series will launch its new season at the Southampton Cultural Center on Saturday at 6 p.m. with a performance by Zhu Wang. Nathan Lee, originally announced as the evening's artist, was unable to perform as scheduled.

Surf Cinema
The Surfrider Foundation Eastern Long Island Chapter's 20th annual Surf Movie Night, a benefit for clean water and healthy beaches, will be held at the Southampton Arts Center on Saturday from 4 to 9 p.m.

Tickets are $25; registration for the surf swap and film is on the center's website. Sunday is the rain date.

The library website's calendar is the source for the most up-to-date listings. There will be no screenings on Sept. 23, Nov. 11, or Nov. 25.

'Shining' in Springs
The Pollock-Krasner House and Study Center's "Art Goes to the Movies Series" continues Friday with a 7 p.m. screening of Stanley Kubrick's 1980 horror film "The Shining." Based on a Stephen King novel of the same name, the film stars Jack Nicholson as a writer who becomes unhinged while isolated in an old hotel with his family during a winter break.

The film's use of doubles, including two look-alike girls, was influenced by Diane Arbus's 1967 photograph "Identical Twins, Rochelle, New Jersey." Due to space limitations, free registration is required at 631-324-4929.

This article was modified from its original and print versions to reflect the last-minute announcement that Nathan Lee would be unable to perform in the Rising Stars Piano series. Zhu Wang will take his place.