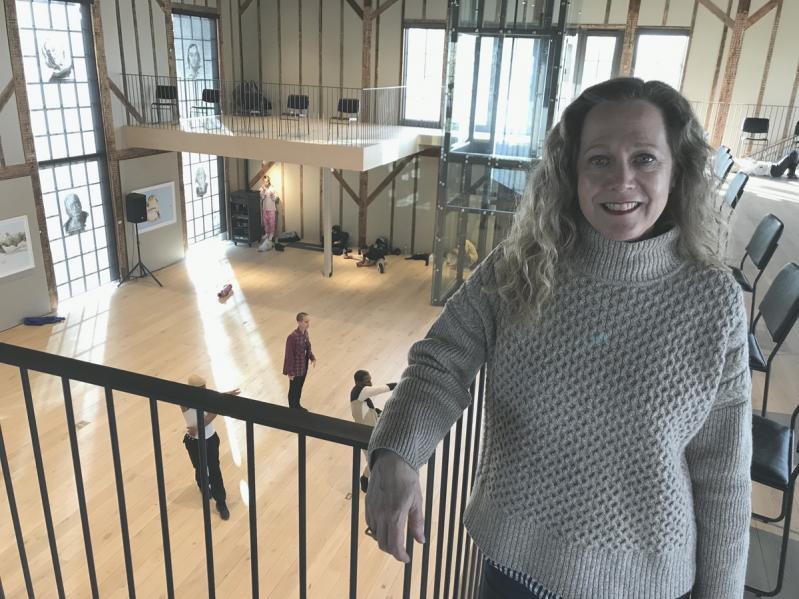 Sara Cochran took a break from her busy schedule at The Church in Sag Harbor, while dancers from Les Ballet Afrik rehearsed for an upcoming performance.
Mark Segal
By Mark Segal

While studying Renaissance drawings as a graduate student at the Sorbonne, Sara Cochran took a job at Galerie Templon, a Paris bastion of contemporary art.

As a result, she said in a conversation at The Church in Sag Harbor, where she is chief curator, "I decided that to be involved in the art of one's time is exciting and hopeful and that the ability to see artists change and grow is one of the enormous pleasures of being involved with contemporary art."

She hasn't looked back. Born and raised in Glasgow, Ms. Cochran enrolled at the University of California, Santa Cruz, after her father, a noted physician, was hired as a professor at U.C.L.A.'s medical school. She studied English literature as an undergraduate, then became more interested in criticism, but went to the Sorbonne in 1993 intending to study political science.

While there, she "lucked into" a course about the art, architecture, books, politics, philosophy, fashion, theater, and decorative arts of 18th-century France. "I realized I really loved writing about art," she said, and she transitioned to art history.

By the time Ms. Cochran received her Master of Advanced Study degree, her focus was on modern and contemporary art, in particular Giorgio de Chirico's later paintings and the media sources of Francis Picabia's late work.

From Paris she went to the Guggenheim Museum in New York to work on an exhibition about French contemporary art. "At that point, I knew I needed a Ph.D. and wanted to go back to the U.K.," she said. She earned her doctorate at London's prestigious Courtauld Institute of Art in 2004, and was promptly hired by the Los Angeles County Museum of Art to work on an exhibition of Magritte and contemporary art, "very close to the work I'd done for my doctorate."

Magritte, de Chirico, and Picabia "all transgressed against the rules of modernism," she said, "and they suffered for it. I found that very interesting. I'm very interested in political discussions around art." She cited as an example a current discussion in the curatorial world about "the Fox News history of art, which tends to look at how contemporary art is either obscene, or a ridiculous trick played on the rich," and says the only kind of good art is simplistically figurative.

"The most exciting times in my life have been in an artist's studio when I've seen new work or understood why an artist is trying to do something," Ms. Cochran said. She is passionate about the importance of art history: It can "help us enormously with understanding some of the ways that images are being used in advertising, but also in politics, to manipulate people. That's my pitch for art history. It'll make you stronger."

While in Los Angeles, she worked on a David Hockney portrait show as well as an exhibition titled "Dali Painting in Film." (The Spanish Surrealist's melting clocks are familiar, but it is less well known that he and his wife spent almost 10 years in the United States, summering in Carmel, Calif.) During that time, Dali "punched the clock at Disney," worked with Alfred Hitchcock, and was even involved in a project with the Marx Brothers that never came to fruition. "I grieve that we never saw the Marx Brothers film with Dali, I think it would have been tremendous."

In 2008, Ms. Cochran became curator of modern and contemporary art at the Phoenix Art Museum, where she organized a show of Latino art after discovering that the museum, in its 50-year existence, had orchestrated 25 exhibitions of Mexican art, but none of Latino art. Two other shows she is proud of featured Ahmed Alsoudani, a noted painter from Iraq, and portraits by the African-American painter Kehinde Wiley (known more generally for his painting of former president Barack Obama for the National Portrait Gallery) inspired by the work of the 15th-century Flemish artist Hans Memling.

After five years in Phoenix, Ms. Cochran made an 11-mile lateral move to the Scottsdale Museum of Contemporary Art, where she eventually became director and chief curator.

While there, she attended the Getty Leadership Institute, where pressing problems facing museums today were explored, among them funding and how to remain relevant "in a world where there are newer and shinier things to do than come and look at objects. I believe fundamentally in those objects, and I would love to see more people engaged with museums in whatever way they would like."

"Museums," she added, "from being rather dusty places, have stepped forward into a leadership role in communities and culture, with a lot of crossover."

San Francisco, in 2018, was her next stop. There, she was co-curator of "Future IDs," an exhibition on Alcatraz Island of a project by Gregory Sale, an artist she'd met in Phoenix. "Future IDs" was designed in collaboration with members of the Anti-Recidivism Coalition, a nonprofit support network for people who'd been in jail and advocates for justice reform. Mr. Sale asked the former prisoners to envisage, in large-scale artworks, what their lives would be like in years to come.

The San Francisco Chronicle wrote that " 'Future IDs' is more than an art exhibit. Monthly programs every third Saturday, co-presented with organizations including Actors' Gang Prison Project and Young Women's Freedom Center, are scheduled to address issues around reintegration and rehabilitation."

Soon after her involvement with "Future IDs," Ms. Cochran applied for the job at The Church. She had first met Eric Fischl, its co-founder with April Gornik, in Phoenix, where, she said, "he has been very generous to one of his alma maters, Phoenix College."

While she had occasionally visited the East End while working at the Guggenheim Museum in the 1990s, "it was not a place where I had spent a great deal of time. But the project was just so exciting," she said.

"I thought it would be really wonderful to work here and open an institution. Little did I know I would be working through a pandemic. It's certainly allowed us to think about the unexpected, but we have been very lucky . . . it gave us time to reflect, it gave us a little more time to plan. All of that was very positive."

Since opening to the public in April 2021, The Church has held art exhibitions, dance performances, music programs, conversations with artists, collectors, and curators, and hosted residencies.

One example of the venue's ambitious programming was "Road Rave," a 20-minute performance by Laurie Anderson during which she "conducted" horns and other noises from a congregation of vintage and contemporary cars and their drivers at Havens Beach.

Four members of Les Ballet Afrik, a New York dance company that blends ballroom with voguing and African dance technique, are currently in residence while developing "New York Is Burning" for an eventual premiere at the Guggenheim.

"We always knew that this year was about experimentation, and that the building would teach us a great deal." She cited as one example discovering the former church's extraordinary acoustics, thanks to its old wood, much of which has been left exposed.

An exhibition around the theme of water is planned at The Church in April. There will be more dance programs, concerts, and lectures coming this season as well.

Free Car Seat Checks in Southampton
Battle of the Books, and More Fun for Teens
This Week's Happenings in Montauk
END_OF_DOCUMENT_TOKEN_TO_BE_REPLACED