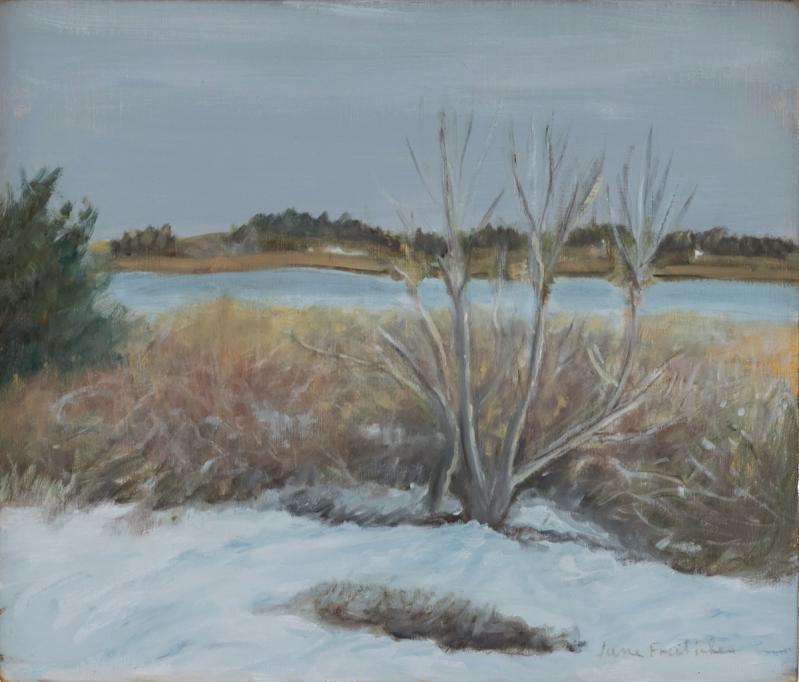 Jane Freilicher's painting "Snow Day" will be on view at the Drawing Room in East Hampton.
Jenny Gorman
By Mark Segal

A Celebration of Snow
“Snow Day,” an exhibition of photographs by a 19th-century meteorologist and nine modern and contemporary artists, will open at the Drawing Room in East Hampton on Saturday.

In 1885, Wilson A. Bentley, who had been mesmerized by snow since childhood, discovered a technique that enabled him to photograph the unique crystalline structure of individual snowflakes.

“Snow Day,” which has been organized in association with the Eric Brown Art Group, brings together a selection of Bentley’s rare photomicrographs with snowscapes by Jennifer Bartlett, Charles Burchfield, Jack Bush, Lois Dodd, Jane Freilicher, Hector Leonardi, Aubrey Levinthal, Kathryn Lynch, and Fairfield Porter. It will continue to be on view through Feb. 27.

He Stoops to Conquer
“A Place to Rest,” an exhibition of sculpture by Richard Sigmund, will open at Keyes Art in Sag Harbor with a reception Saturday from 6 to 8 p.m., and will remain through Feb. 2.

On his website, the artist says, “I use street imagery as a point of departure. The street has become my teacher.” The works on view derive from the common sidewalk stoop. One is a loading dock, another is a beat-up stoop in Dumbo, both constructed from painted wood and metal. A third, “Hindu Stoop,” supports Tibetan prayer cymbals.

Mr. Sigmund, who lives in Brooklyn and Springs, says, “Every stoop is a place where people congregate, a place to meet.” The decorative quality of the  pieces, suggestive of shrines, is inspired by his many trips to India.

A Sacred Landscape
Jeremy Dennis, an artist and member of the Shinnecock Indian Nation, will screen his short documentary “Ma’s House,” followed by a conversation and postcard-writing workshop, on Friday at 6 p.m. at the Parrish Art Museum in Water Mill.

In June 2020, Mr. Dennis and his family began to renovate his grandmother’s house on the Shinnecock Reservation and to build the BIPOC Art Studio, which offers residencies for artists who are Black, Indigenous, and people of color. The artist discusses the project in the film.

After the screening, Mr. Dennis will give a brief history of Shinnecock Hills, and will invite the audience to design postcards advocating a building moratorium on the tribe’s sacred landscape.

Tickets are $12, $9 for senior citizens, free for museum members and students. Advance registration has been recommended; a limited number of tickets will be available at the door.

Mixing Mediums
“Winter Lift,” an exhibition of paintings, mixed-media works, ceramics, and wearable art, will be on view at the Zadeh Gallery in Southampton from Friday through March 13.

A collaboration between Coco Myers of Folioeast and Catherine Zadeh, who opened her gallery in November, the show includes paintings by Pamela Dove, mixed-media pieces by Beth O’Donnell, and ceramic sculptures by Rosario Varela and Sarah Jaffe Turnbull.

A selection of Ms. Zadeh’s one-of-a-kind and limited-edition works, which combine precious metals, gemstones, and diamonds with elements such as wood and sustainable horn, will also be on view.

Rabbit, Rabbit
“Down the Rabbit Hole: Hunt Slonem and Kristy Gordon” will open Saturday at the Grenning Gallery in Sag Harbor. While bunnies and other animals figure in the paintings of both artists, the metaphor of the rabbit hole from “Alice in Wonderland” is more to the point, according to the gallery.

Ms. Gordon’s elaborate compositions, which suggest the influence of Bruegel the Elder and Bosch, among others, transport the viewer to a theatrical realm, one populated by mythological figures, contemporary humans, skeletons, and all manner of plant and animal life.

Mr. Slonem’s colorful paintings of birds and rabbits are more expressionistic than the gallery’s usual classical-realist niche. Straddling Pop and cartoons, they suggest that the gallery, too, is dipping into uncharted territory. The show will continue through Feb. 13.

A State of Mind
“Postcard Perfect,” an exhibition of recent paintings by Lizbeth Mitty, is on view at Harper’s Apartment on the Upper East Side through Feb. 19. Created during the pandemic, the paintings offer up idyllic landscapes as a contrast to isolation in lockdown.

Ms. Mitty allows her acrylic marks to drop, pool, and swirl across the canvas, yielding scenes of nature in a constant state of flux. Still life paintings of food and potted plants appear to be melting like candle wax, the gallery says, while mountains and seaside villages “wisp into each other in the distance.”

The art critic and poet Gerrit Henry has said that Ms. Mitty’s works “are not primarily paintings of a place,” but rather renderings of a state of mind.

Solomon in Chelsea
“Syd Solomon: Concealed and Revealed,” a traveling museum exhibition of work by the abstract painter, who divided his time between East Hampton and Sarasota, Fla., is on view at the Berry Campbell Gallery in Chelsea through Feb. 5.

The show includes 16 paintings and works on paper drawn from the artist’s estate, as well as newly discovered materials from the Solomon Archive, revealing how his World War II camouflage designs and other early graphic-arts skills helped shape his approach to Abstract Expressionism.

Solomon, who had a retrospective exhibition at the New York Cultural Center in the mid-1970s, was a central figure among the artists, writers, and musicians of his time, many of whom he brought to Florida to teach at the New College of Sarasota's Institute of Fine Art.

This article has been modified from its print version to reflect the change in the opening at Keyes Art from Friday to Saturday.