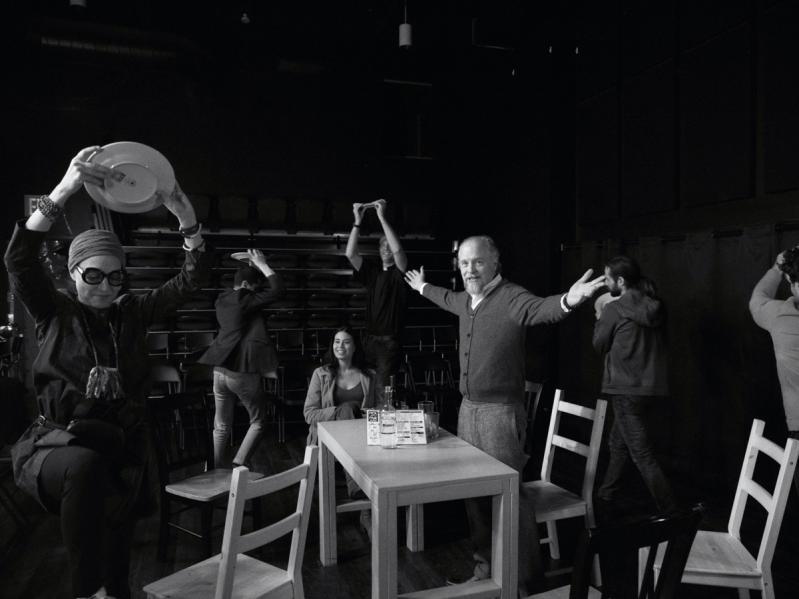 While the visual arts were relatively quick to rebound after the initial public health shutdowns in the spring of 2020, performing arts has lagged.

The reopening of major Broadway musicals and plays this month and the emergence of smaller and artier productions has re-energized not only stages, but New York City itself, and likely downtown cityscapes all over America.

The Lanford Wilson Project, under the aegis of Bruce (Mac) McCarty's Open Circle Play Factory, is one of the latter, a group for whom "the shows must go on," helped along by members such as Katherine King. Ms. King, who has long divided her time between New York City and Montauk, will act in "Sympathetic Magic," one of two Wilson plays the group is bringing to the stage in November as two parts of a program.

The other play is "The Mound Builders," a story of families coming apart, written by Wilson (who lived most of his later life in Sag Harbor) in 1975. It serves as a counterweight to "Sympathetic Magic," in which a group consisting of astronomers, an anthropologist, a sculptor, a choir leader, and a priest gather to contemplate the universe.

Ms. King is late to the acting game, having discovered the craft at the age of 46 in her Shadmoor house once owned by Uta Hagen and overlooking the beach where she was married in 1997. But she is a fast runner and has managed to accumulate several film and theater credits since she started in 2016.

She and the casts of these two plays and Mr. McCarty are also improvising as producers for these shows, which will have a run from Nov. 24 to Dec. 18. The plays will be staged alternately, and there will be a few dates when each can be seen on the same day, including closing day.

Mr. McCarty was a protege of Wilson's and the inheritor of much of his play archive. Describing his origin story on the Open Circle Play Factory website, he said, "As I was coming up in the New York theater scene, I was taken under the wing of . . . a group of artists called the Circle Repertory Company, founded in 1969 by Tanya Berezin [who also lived in Sag Harbor], Marshall W. Mason, Rob Thirkield and Lanford Wilson."

He added that the work he did with Wilson and William Esper, a teacher of the instinctual Meisner technique, can trace its lineage back to the collaboration of Konstantin Stanislavski and Anton Chekhov in bringing the latter's plays to life on the stage at the turn of the 20th century.

"I've always been fascinated with these two plays," Mr. McCarty said on Friday. "Superficially, they're both about academic communities . . . but that was not really what I was tracking."

He described "The Mound Builders" as a mystery, but a very Lanford Wilson type of mystery with a "J.D. Salinger-like" female figure. It also "gets into incredibly important primary questions, as all of Lanford's work does, about our society and how we live as humans."

"Sympathetic Magic" is personally important to Mr. McCarty because it was written for him, a role he never played because of a long falling out between the playwright and the actor that he said was based on his own "youthful arrogance." Their reunion was sparked in part when Wilson attended a reading Mr. McCarty did of the play some years later.

He deemed "Sympathetic Magic" Wilson's "best play in terms of bringing all of his powers to bear on one very specific piece. Every moment in it seems so exquisitely crafted."

In mounting these plays and anticipated future programs, "the goal is to revitalize ensemble work based on Meisner principles and great writing, about which Lanford and Bill, Tanya, and Marshall taught me to dream," he said.

Like many smaller theater groups, this one is in need of funding and has raised, at the time of this writing, more than $47,000, about $10,000 shy of its goal for production costs.  The play will be performed at Theater Row, a nonprofit building for the arts at 410 West 42nd Street. Donations are being accepted through the Open Circle Play Factory website.

Although this group came out of Covid and together as a result of it, the themes it is developing through these plays are more universal. "Burn This," one of Wilson's most famous plays, is about a disease caused by a virus, AIDS, but the work here also covers family dynamics, misogyny, the educational system, and love, Ms. King said.

"The art Mac is trying to make comforts the uncomfortable and makes uncomfortable the comfortable," she said. "The Mound Builders" and "Sympathetic Magic" (1998) were addressing marginalized communities, those often attracted to theater and the New York stage. "If we don't have theaters in New York City, we don't have a place to go for those people who have been rejected elsewhere," those with energy and creative drive. "Most of the time they're told to calm down."

In addition to a passion for surfing as an avocation, her day job is in organizational psychology, specifically as a founder, director, and principal consultant of Invisible Culture, an intercultural management consulting firm with a strong focus on how culture impacts people and organizations.

Ms. King also teaches a class at Baruch College called Intercultural Communication, Training, Coaching, and Consulting. "For me, having theater is an expansion of an education system that's still only educating a minority of the population." She said this is because most education still happens through books, and "really only 25 to 35 percent of the population really loves reading books." Theater can expand that education in the way oral history traditions and visual art spread knowledge, culture, and religion before the printing press came into being and literacy became more common.

With acting and filmmaking ("Glass Door," now in film festivals, which came out of being quarantined under Covid, and "Corners," a short film inspired by her mother's Alzheimer's disease) as new directions in her quest to increase communication between people and cultures, "I've learned that art heals. And it heals in ways that people who have never had to heal from something could never possibly imagine."