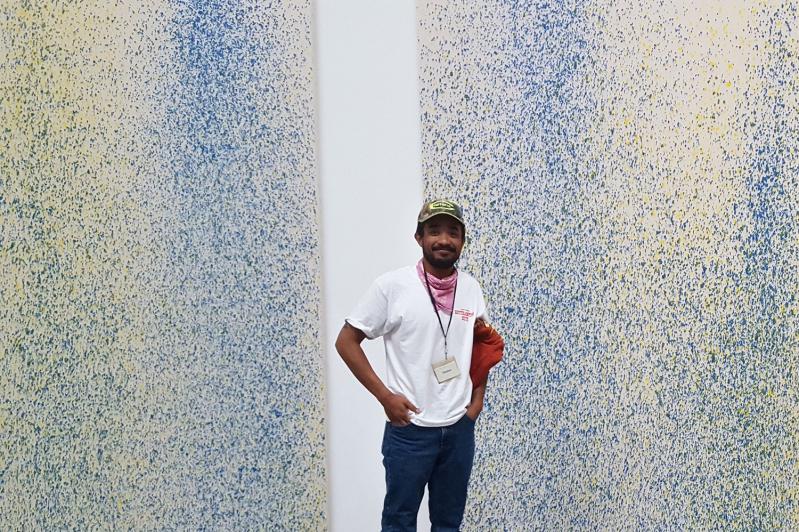 Lucien Smith was still a student at Cooper Union when, in 2011, he began his series of "Rain Paintings," which were made by spraying paint-filled fire extinguishers on canvas. Those early works were sought after by collectors. Two years later, working outdoors in a self-constructed plein-air studio in a Southampton garden, he revisited the series.

The resulting works, "Southampton Suite," which he saw as a closing chapter to the "Rain Paintings," are on view at the Parrish Art Museum in Water Mill through January. Alicia Longwell, the museum's chief curator, will discuss the paintings with Mr. Smith in the gallery tomorrow at 5 p.m.

When Ms. Longwell asked the artist if the suite had been inspired by Monet, he cited more contemporary influences, including Julian Schnabel's outdoor studio in Montauk. Mr. Smith now lives in the hamlet.

"He also mentioned Andy Warhol's oxidation paintings," Ms. Longwell said, "in the sense of a sort of alchemical change in the process, and Hans Hartung," who used a garden weed sprayer to paint when he was older and disabled.

Ms. Longwell first met Mr. Smith after one of the "Rain Paintings" had been donated to the museum. By then the remaining works in the series were in storage, but a year and a half ago he installed them in a warehouse and invited her to see them.

"When I walked into the room I was really astonished, because it was precisely the dimensions of one of our galleries. They were gorgeous, and I told Lucien if the opportunity ever came up I would love to do something with them."

While museum exhibitions are ordinarily set years in advance, the pandemic forced the Parrish to reschedule the shows that had been planned for August. Ms. Longwell seized the opportunity. "It happened very quickly because the reopening was sort of a moving target. Those paintings were from such a memorable moment in his career, and the art had been painted here on the East End."

"Southampton Suite" consists of 10 paintings, each 9 by 7 feet, which have never been shown as a group. A limited number of tickets, priced at $20, $10 for members, are available for an in-person talk. The conversation will also be live-streamed for free. Registration for both options is on the museum's website.