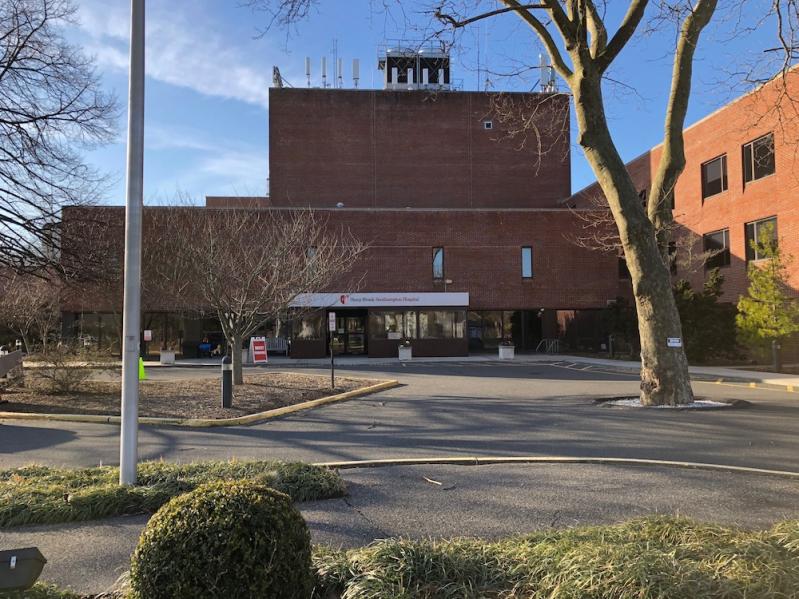 Stony Brook Southampton Hospital staff were told on Friday to begin prepping for a transfer of a likely case of COVID-19, according to a source who works there.
Jennifer Landes
By Christine Sampson

Update, March 9, 1:30 p.m.: A man who was confirmed as Suffolk County's first coronavirus patient on Sunday is improving while reportedly in the care of Stony Brook Southampton Hospital.

Suffolk County Executive Steve Bellone provided the patient's updated health status during a news conference late Monday morning, though he still did not directly confirm that the man, who is in his early 40s, is being treated at Southampton, as has been widely reported.

Mr. Bellone said the man, who is in "hospital isolation," likely contracted the virus through community transmission, as opposed to having recently traveled to a high-risk area. The county executive would not answer questions about what the man does for work or where he lives. State directives, he said, are to provide as little personal information as possible.

One person who has been identified as having come in contact with the patient is under mandatory quarantine, Mr. Bellone said. Eighteen people in the county have been formally tested for the virus; the results are pending. The county executive said 35 people in Suffolk are under a precautionary quarantine. That number does not include the 22 recently returned study-abroad State University of New York students who will remain in precautionary quarantine at the Stony Brook Southampton campus for another 12 days.

Suffolk's one confirmed patient makes a total of 18 cases on Long Island. The other 17 are in Nassau, that county's executive, Laura Curran, said during a news conference early Monday. There were 15 cases in New York City as of Monday morning, according to News 12. Nine states, including New York, have declared a state of emergency.

"All of this is prudence and precaution, making sure that we are doing everything we can to contain the virus as much as we can," Mr. Bellone said Monday. "There is no reason to panic here, or to be overly concerned. All of the attention that people see in the news, on the radio, in the media about this, is because this is a new virus and because there is a lot of effort going into containing it. It's not because there is a reason for everyone to panic."

The Southampton Press has reported that the patient, a 42-year-old man, was first treated at Eastern Long Island Hospital, a Stony Brook facility in Greenport, before being transferred to Stony Brook Southampton Hospital.

A source employed in a medical role by the hospital told The Star Sunday that the facility had been preparing for the arrival of a "likely case" since Friday. Another source associated with Stony Brook Southampton said several patients with suspected cases have been tested for the virus, but that those tests have to be sent to Albany for processing, causing delays.

Northwell Health, one of Long Island's largest hospital systems, was approved by the federal government over the weekend to also begin processing tests, Gov. Andrew M. Cuomo announced in a press conference. As the number of cases in New York State continued to rise, the governor declared a state of emergency on Saturday.

Congressman Lee Zeldin said in a statement Sunday afternoon that the county's first confirmed case serves "as a reminder for all levels of government to work closely together to try to contain coronavirus as much as possible."

Also Sunday, the State University of New York released a statement on the 22 students who have chosen to voluntarily quarantine themselves at the Stony Brook Southampton College campus for 14 days after returning Saturday from study-abroad programs.

The Southampton Press report said that the patient being treated at the hospital was not one of those students.

Richard J. Gatteau, Stony Brook University's vice president for student affairs, said in an announcement that those 22 students have been pre-screened for coronavirus and all have been cleared, but that they remain isolated as a precaution. Dr. Gatteau said the procedure calls for "no interaction with any other part of the campus."

"Our first priority is the safety, health, and welfare of all students, faculty, and staff who are currently residing on the Southampton campus, as well as for members of the broader community who live and work in the local area," he said. “We are working around the clock to ensure that contact with students who will undergo precautionary quarantine on campus will be limited to telehealth providers and clinicians who are experienced and trained to care for people who may have been exposed to the 2019 novel coronavirus disease."

As of Sunday evening, there were 105 confirmed cases of coronavirus in New York State, according to the governor, though many are concentrated in the New Rochelle area.