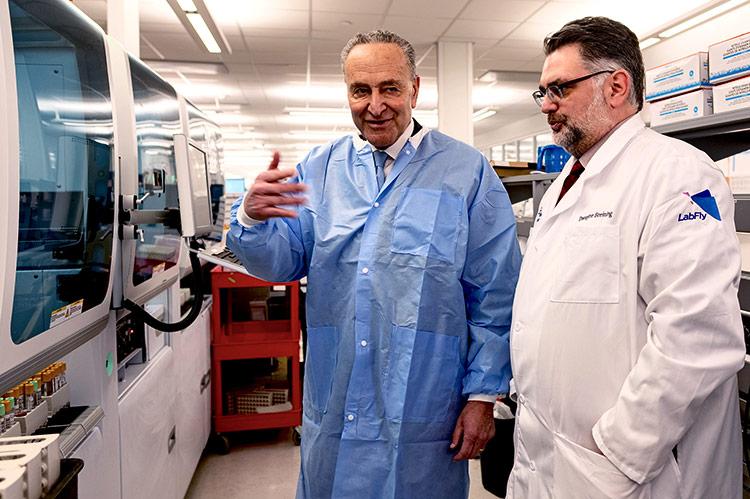 Update: Gov. Andrew M. Cuomo announced Thursday afternoon that the first confirmed case of the coronavirus has surfaced on Long Island. A 42-year-old man resident of Nassau County tested positive for the virus and is hospitalized at the N.Y.U. Winthrop Hospital in Mineola.

Original Post as it Appeared in Print: As the coronavirus creeps ever closer to the East End, municipalities, hospital officials, schools, and even a grassroots organization are preparing for a possible outbreak.

As of press time, there were no confirmed cases of the novel coronavirus confirmed in Suffolk or Nassau Counties. The first patient in New York, a 39-year-old health care worker who had returned from working in Iran, was announced Sunday. By yesterday there were six confirmed cases in the state. A Manhattan lawyer who lives in New Rochelle tested positive, and yesterday morning news broke that members of his family and a neighbor who had driven him to the hospital had also tested positive. Yeshiva University, where the man’s 22-year-old son is a student, was among the schools that had closed. The lawyer, who has an underlying respiratory illness, is being treated in the intensive care unit in a city hospital; his family was quarantined at home in Westchester County.

Covid-19, the disease caused by the new coronavirus, is more deadly than the seasonal flu, though it does not transmit quite as easily, according to the World Health Organization. The global mortality rate is listed at 3.4 percent, though the W.H.O. says that figure is more indicative of the outbreak in China, where most of the cases have occurred. The seasonal flu is said to kill less than 1 percent of those it infects.

Gov. Andrew M. Cuomo stressed that New Yorkers should not panic. “We have an epidemic caused by coronavirus, but we have a pandemic that is caused by fear,” he said at a press conference yesterday morning.

On Tuesday, he signed a $40 million emergency management authorization for New York’s coronavirus response, which will allow the state to hire the additional staff necessary and get equipment and resources as cases grow.

Outbreaks are now documented in Japan, Italy, Iran, South Korea, and France, where the Louvre in Paris, the most visited art museum in the world, reopened after closing for several days. And with approximately 120 documented patients with the illness in 16 states in this country, including nine deaths in Washington State — and the specter of more to come — East Enders are taking precautions.

Supplies like hand sanitizer were gone from shelves at most major retailers on Tuesday and schools are evaluating how best to protect students.

In Sag Harbor, Pierson Middle and High School officials last week canceled a high school trip to Hawaii, scheduled for spring break in April. “It was thinking ahead,” Jeff Nichols, the high school principal, said yesterday. “They didn’t want kids to put down thousands of dollars and a decision could be made to not go and families would be out the money.”

At the Ross School in East Hampton, administrators canceled a Field Academy trip to Japan. At the last minute, the chaperones were able to arrange a trip to the southwestern United States instead, said Andi O’Hearn, Ross’s director of advancement and operations. Other travel programs, including a field academy trip to Zimbabwe, have been unaffected, she said.

Ross students have been kept aware of the virus on a weekly basis, and the school even created a task force of administrators who monitor virus updates from agencies like the C.D.C., U.S. State Department, and World Health Organization. Ms. O’Hearn said boarding house parents have been closely watching the students’ health, even taking their temperatures sometimes out of an abundance of caution.

The Ross School has also sent four informational letters to parents, including one that directly dispelled a rumor that there was a case of the virus on campus. “We have one child who went home to China for a medical procedure but is not expected to return until April. I don’t know what the status will be for the child,” Ms. O’Hearn said. “It’s possible he won’t be able to come back. He went home before the coronavirus. We don’t have anyone who’s stuck anywhere.”

“We are definitely preparing for what we would do if there was a problem,” she said. “It doesn’t have to be at Ross. If there was a problem in East Hampton, we’d need to be prepared. I think people seem very scared, but the best thing we can do is have good communications with our families and follow the guidelines from the C.D.C. and State Department.”

The East Hampton School District has ordered hand sanitizer for every classroom, school officials said during a Tuesday night school board meeting. It has also been suggested, for the protection of student-athletes, that the practice of handshakes and high-fives at the end of games be put on hold. “We’re really making a concrete effort, making sure cleanliness is important,” said Richard Burns, the superintendent. “If your child is sick, please keep them home.”

Yesterday, Governor Cuomo also announced that 300 students and faculty from the State University of New York and City University of New York were being recalled from studies abroad from China, Italy, Iran, South Korea, and Japan. They will be quarantined for 14 days in a dormitory-style setting on Long Island. It was not clear where that would be.

While federal officials work on a vaccine and treatments to alleviate symptoms, local authorities are preparing for a possible pandemic. On Tuesday, President Trump and officials from the Centers for Disease Control updated county officials from all 50 states

Following approval from the U.S. Food and Drug Administration for outside labs to begin testing for the virus, officials at Northwell Health, the state’s largest health care provider, announced Monday that it expects its lab to begin conducting the Covid-19 tests. Northwell Health has an urgent care facility in Bridgehampton and operates Peconic Bay Medical Center in Riverhead.

Before this week, all nasopharyngeal swab samples from patients with symptoms that met the C.D.C.’s criteria for  coronavirus suspicion had to be sent to a federal lab in Atlanta for testing. Only patients who have had contact with someone infected with the virus or those who are very ill and will require hospitalization will be tested. Those with milder symptoms who do not require hospitalization will not be tested.

U.S. Senator Charles Schumer held a press conference with health system officials at Core Lab within Northwell’s Center for Advanced Medicine in Lake Success. Officials are anticipating 75 to 100 tests will be processed daily initially, with hundreds and even thousands processed daily once the lab automates the process.

Over the next month, Northwell’s lab is working with test manufacturers to make testing available within its hospitals, including on Long Island, where it already conducts rapid molecular testing for the seasonal flu using similar technology. Northwell said in a statement that it has already invested more than $5 million in coronavirus preparation over the past six weeks, including more than $2 million for lab testing and supplies.

“Northwell is well prepared to manage the challenges posed by the coronavirus, as evidenced by our response to previous infectious disease outbreaks, including our anthrax response in 2001, SARS in 2003, swine flu in 2009, and Ebola in 2014,” Michael Dowling, its president and C.E.O., said.

“It’s important for people to remain calm and take practical steps such as routine hand-washing to protect against not only the coronavirus but the flu, which has already affected 26 million Americans this season and killed more than 16,000.”

Patients who are isolated for a host of reasons are often treated at Peconic Bay Medical Center in Riverhead and Stony Brook University Hospital. A spokesman for Northwell Health said that Peconic Bay has “surge plans” if needed that include alternate care sites. It has an adequate number of ventilators “given the current status of ailments such as the flu as well as potential Covid-19.”

Stony Brook Medicine has been implementing the C.D.C containment strategy guidelines for detecting, tracking, and isolating cases of Covid-19, according to Kali Chan, the director of medicine media relations, who responded to an inquiry to both Stony Brook Southampton Hospital and Stony Brook University Hospital. “In addition to the clinical protocols and screening process in place to quickly identify potentially infectious patients in the emergency department and outpatient areas, our teams utilize key infection prevention and control measures and staff wear recommended personal protective equipment.”

Over the weekend, a group of East Hampton residents came together in Springs to figure out a way to gather and disseminate information to the community. Mary Blake said she was worried, in particular, about the older shut-ins, who are not computer savvy and not able to readily access information.

“We’re also very concerned with verifiable resources,” said Robert Anthony, who is heading the group with Ms. Blake. “There is so much misinformation being spread around.”

They created a website, easthamptoncovid-19.com, as a resource and only post information that has been vetted and deemed legitimate, he said. The group is reaching out to the medical community, schools, and religious communities, and is working on a dual-language flier. “The response we made was anticipatory, rather than wait for the tragedy to hit,” Ms. Blake said.

Eighty percent of those who get the virus, Governor Cuomo said, will have no complications. Symptoms, which may appear 2 to 14 days after exposure, include fever, cough, and difficulty breathing or shortness of breath, according to the C.D.C. Those who have recently traveled to China, South Korea, Iran, or northern Italy, or have been in close proximity to someone who has and  experience flu-like symptoms, have been asked to contact a doctor so that hospitals are not inundated.

At an East Hampton Town Board work session on Tuesday, Supervisor Peter Van Scoyoc said town officials continue to monitor health advisories. He also put out a notice to town employees reminding them of the C.D.C’s standard disease-prevention practices, such as avoiding close contact with those who are sick, washing hands frequently with soap and water for at least 20 seconds or using an alcohol-based hand sanitizer with at least 60 percent alcohol.

“We’ve put out hand sanitizers in the bathrooms and public counters and shared employee spaces. I was happy to see people taking advantage of the hand sanitizer just outside the meeting room today as they came in,” he said. He reminded people to use disinfectant on regularly used items like keyboards, phones, door handles, countertops, shared holders for pens, chair handles, light switches, and computer mouses.

“If we just have a heightened protocol for hygiene and disinfecting, that goes a long way toward preventing the spread of this and other illnesses,” he said. With reporting by Christopher Walsh and Christine Sampson