Patchita Tennant refuses a plea deal, insisting she shot her boyfriend in self-defense 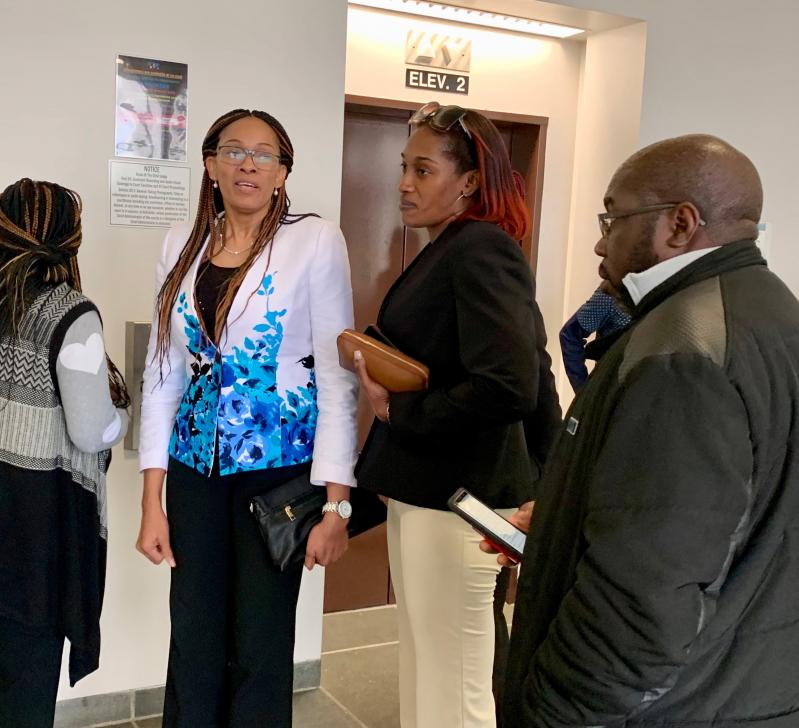 Patchita Tennant, in the white and floral blazer and flanked by supporters, said she is certain the truth will come out at her trial on attempted murder charges, which is set to begin with jury selection on Monday.
Taylor K. Vecsey Photos
By Taylor K. Vecsey

Patchita Tennant, the former manager of an East Hampton CVS who shot her boyfriend in their Flanders home last fall, is taking her chances at trial, which will begin on Monday with jury selection in Suffolk County Criminal Court.

Ms. Tennant, who worked at the CVS on Pantigo Road in East Hampton for many years and is well liked there, faces a maximum sentence of 25 years to life on each of the top two counts, which includes attempted murder, in the four-count indictment.

After a pre-trial hearing in Judge John B. Collins's courtroom on Thursday, Matthew Tuohy of Huntington, lead attorney for the defense, said he believes Ms. Tennant has a strong case of self-defense, following years of verbal and physical abuse at the hands of her boyfriend. The prosecutor, Eric Aboulafia of the Suffolk County District Attorney's office, painted a different picture at her arraignment in November — that she shot him because he would not marry her.

The assistant D.A. was willing to discuss a plea deal, but Mr. Tuohy said his client was not interested. "She has said that she is 100 percent innocent," he said.

While Ms. Tennant does not argue that she shot Andrew Mitchell three times with a .38-caliber handgun on Sept. 5, she maintains she was in a fight for her life when it happened, during an argument turned physical. "She feels as if she was the victim and he was terrorizing her and he was going to shoot her with the gun he had,” said her lawyer. “It was his gun. She feels strongly [that] she's the victim here. He just got hurt and called the police."

Mr. Mitchell was airlifted to Stony Brook University Hospital, where he underwent surgery. He was shot twice in the chest and once in the arm and was in the operating room for three hours. He also sustained injuries to his diaphragm and lungs, so much so that part of a lung had to be removed.

Ms. Tennant left the house. An Amber Alert was issued later for the couple's then 3-year-old daughter, who was found safe the next morning at a relative's house in Riverside. The girl was not at the Flanders on the night of the shooting.

Mr. Mitchell and Ms. Tennant, who is free on a $500,000 bond posted by family and friends in the days after her arrest in September, are also contending in Family Court over the custody of their daughter.

The judge held a hearing Thursday to determine whether evidence of prior uncharged crimes by the defendant could be admissible during the trial. The prosecution plans to introduce evidence that a month or so before the shooting, Ms. Tennant cut wires to cameras Mr. Mitchell had placed around their house. The defense team did not object, because, Mr. Tuohy said later, Mr. Mitchell was using the cameras to watch his girlfriend and then berate her about whatever she had been doing. She considered it stalking, her lawyer said, and cut the wires to put a stop to it.

Judge Collins ruled that the wire-cutting could be brought in as evidence during the trial.

The D.A.'s office also wanted to introduce an incident involving something done to Mr. Mitchell's boat at around the same time. The defense objected, and Judge Collins agreed, saying it was mere speculation that Ms. Tennant had done anything to the boat.

In the end, the case may well turn on whose word the jury believes. Mr. Tuohy, who is trying the case with Austin Manghan, contends that Mr. Mitchell was the aggressor all along, but has manipulated the situation to appear as the victim.

Both Mr. Mitchell and Ms. Tennant are expected to take the stand. "She's credible. She's honest. She's a nice person, and people are going to see that," her attorney said.

Judge Collins will bring in 150 potential jurors on Monday, in two groups of 75, and begin with hardship hearings for those who have valid reasons as to why they cannot serve. Attorneys for both sides will begin selecting jurors on Tuesday.

"The best jurors are people who are intelligent," Mr. Tuohy said. "People who are reasonable, who can look at the whole situation -- not people who make a snap-second judgment and they have their minds made up."

Opening arguments could begin on Friday, March 6, or Monday, March 9. The trial is expected to last two to two and a half weeks.