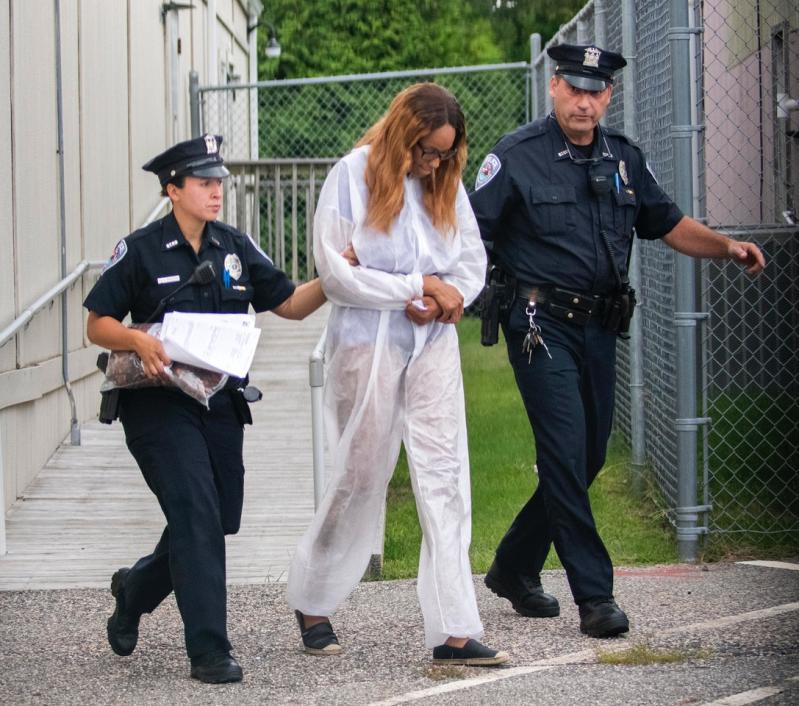 Patchita Tennant was led out of Southampton Town Justice Court after appearing on felony charges stemming from a shooting in Flanders on Thursday.
Doug Kuntz
By Taylor K. Vecsey

The woman accused of shooting her child's father inside their Flanders home and then taking off with their 3-year-old, causing police to issue an Amber Alert, was the victim of domestic abuse, her criminal defense attorney claims.

On Saturday, Patchita Tennant, who worked at the CVS on Pantigo Road in East Hampton for many years, was arraigned on two felony charges — assault in the first degree and criminal use of a firearm — in Southampton Town Justice Court. Austin Manghan told Justice Barbara Wilson that his client suffered at the hands of Andrew Mitchell, whom she has been with since the early 2000s. "My client is the victim in this case," he said.

Ms. Tennant was estranged from Mr. Mitchell and staying with her daughter at a relative's house in Riverside. She went back to their house in Flanders — without her daughter — on Thursday evening around 8:20 to get some clothes. An argument ensued between Ms. Tennant and Mr. Mitchell. The Suffolk County District Attorney's office claimed Ms. Tennant banged on a door, yelling, "I'm going to kill you!"

Mr. Manghan said the weapon, a .38 caliber handgun, belonged to Mr. Mitchell, not his client, that she had never seen it before that evening, and did not even know he had one. Neither has a license for the gun. It was not clear if the gun was properly registered or not.

The two wrestled over the gun and it went off, striking Mr. Mitchell three times, twice in the chest and once in the arm, according to the prosecutors. She was "fighting for her life," her attorney said.

The gun dropped to the floor. Ms. Tennant was in shock, he said. Mr. Mitchell, though injured, picked up the gun and allegedly pointed it at her and tried to fire it, as she fled it, but there were no more bullets in it, Mr. Manghan said.

Ms. Tennant left in a 2018 Hyundai Santa Fe, the one that police were looking for in the Amber Alert. She went back to her relative’s house, where she got her daughter. Where they spent the night was unclear. Police issued the Amber Alert to the public around 7:30 on Friday morning, and the child was found, safe, at another relative's house just before 10 a.m. The car was found Friday morning in a parking lot in Middle Island. Ms. Tennant turned herself in to Southampton Town police several hours later.

The D.A.'s office said that by all appearance she appeared to be getting ready to go on the run. Surveillance video reportedly shows Ms. Tennant at a CVS (prosecutors did not say which one). The D.A. said she purchased clothes and "a burner cellphone."

Mr. Mitchell called 911 and was airlifted to Stony Brook University Hospital, where he underwent surgery. He is expected to make a full recovery.

About six women, identified as relatives and co-workers, were in the courtroom to support Ms. Tennant. Her attorney noted that no one was in the courtroom in support of Mr. Mitchell. Ms. Tennant, who also goes by Patricia, has worked for CVS for 15 years and has been the pharmacy manager for nine years, Mr. Manghan said.

Justice Wilson set bail at $250,000 cash or $500,000 bond, and issued two orders of protection, one for Mr. Mitchell and one for their daughter, which means Ms. Tennnat has to stay away from both of them if she makes bail.

Mr. Manghan objected to the O.P. for her daughter. He said, "Ms. Tennant would be devastated not to be with her," should she get out of jail.

Justice Wilson said she was issuing the order given the serious nature of the incident, the Amber Alert, and because she does not know all the facts yet.

Ms. Tennant is due back in court on Thursday. The D.A.'s office said it will be presenting the case to the grand jury.

With Reporting By Doug Kuntz