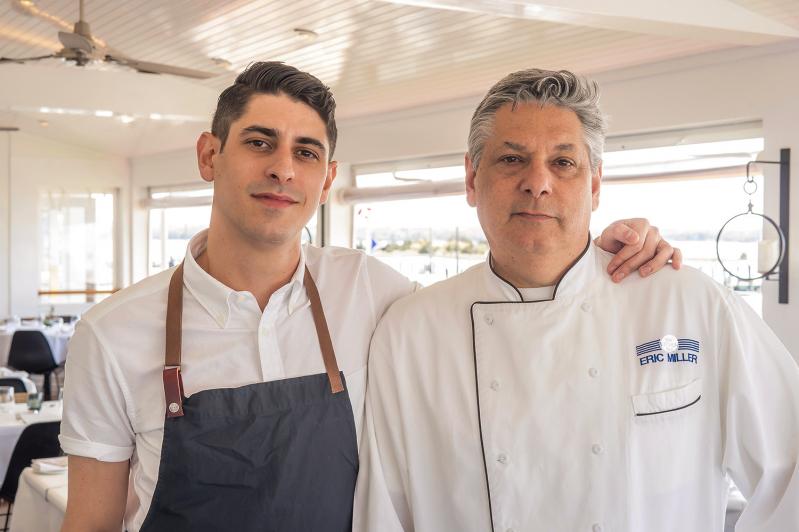 Adam Miller and Eric Miller, who are partners in Rita Cantina, will turn what was until Sunday Dockside restaurant into Bay Street Tavern over the winter.
Noah Fecks
By Jennifer Landes

On Sunday, when Dockside Bar and Grill closed for the season, it also took its final bow. Stacy Sheehan and Elizabeth Barnes, the owners of the much-beloved Sag Harbor eatery, officially announced last Thursday that they had sold the business to a partnership of Eric Miller, Adam Miller, and the developer Adam Potter.

The Miller duo have the successful Rita Cantina Mexican restaurant in Springs and previously had Bay Kitchen and Bar, in what was once and is now again the Bostwick's space on Three Mile Harbor. They own the catering concerns Food and Company and Hampton Clambake as well.

Mr. Potter was brought in as a partner to help finance the space, which they plan to relaunch in mid-to-late-April as Bay Street Tavern. Eric Miller, who is the executive chef of Rita (which will reopen for next season on Cinco de Mayo) will also have that role at Bay Street Tavern. He has more than 30 years of fine dining experience. Adam Miller, who runs Rita's bar and operations, will also duplicate his role at Bay Street. He worked at the Nomad Hotel, Slowly Shirley, and the Polynesian in New York City prior to coming to the South Fork.

The new owners said they were fans of Dockside and will continue its commitment to local "fishmongers, diggers, producers, and farmers." Ms. Barnes and Ms. Sheehan are retiring from the restaurant business. They have given their support and blessing to the Millers' concept for the space, which is essentially a modern and "elevated clam shack," according to Eric Miller, who discussed the new venture by phone last week. For current fans, they said they will continue operating at a "reasonable price to create an approachable, egalitarian restaurant with harbor views."

If anyone is worried that interlopers have invaded the space, it will be heartening to know that Eric Miller's time in Sag Harbor kitchens might be longer than their own tenure on the South Fork. The chef, who is now 64 and has been a year-round resident for 15 years, ran the kitchen in the late 1980s at George Studley's Long Wharf Restaurant and Deck -- currently Le Bilboquet for those who may not recall its earlier iterations.

"I was fortunate enough to work for George at Colombe d'Or in New York City" -- open from 1976 to 1998 -- "when it had three stars from The New York Times," he recalled last week. When the position in Sag Harbor became available, Mr. Miller took it. His wife worked there as well. "That place was a behemoth. We did a ton of business there and had a lot of fun . . . with blenders going and thousands of clams and oysters being shucked" every day.

While Dockside's closure announcement seems sudden, the partners (Adam Miller, who is 33, is also Eric Miller's son) had worked for a while to hook this particular spot. Eric Miller said he had been looking for a special place for his next venture for some time. "Getting onto the water in Sag Harbor, I don't think that type of property shows up very often."

Although Dockside's owners are very private, "word got to me that they were looking to retire and we were super fortunate to be in the right place at the right time." He said the previous owners "have worked so hard for so long. They get to go out properly. We get to come in and refurbish this place and do something that we think Sag Harbor really needs, and has never had, which is a solid, not-too-crazy-expensive seafood restaurant." In describing the concept, he also used the words "super friendly," "egalitarian," and "tavern" in that order.

Although Ms. Sheehan and Ms. Barnes had specific ideas of who they wanted to see take over the business, the landlords were even more exacting. The restaurant is located in the American Legion building on Bay Street. Mr. Miller said it took the partners four or five months to convince the veterans who run the space that they were appropriate tenants for it.

"They really don't want just anyone in the building. They had the same two lovely women" since 1996, he said. They wanted to be sure the new tenants would "respect the dignity of the hall, the history of the hall, and the history of the town." Mr. Miller attended several of the legion's meetings and met with members individually on multiple occasions. They even came to Rita Cantina a couple of times to have Mr. Miller cook for them. "They chose me because I am a local guy, I do care, and I don't have an agenda."

As a menu preview, Mr. Miller said the new space will start with dips and snacks, salads and bowls, raw chilled and ceviche dishes, and a range of small plates. Entrees might be as simple as a patty melt sandwich, fried seafood options like shrimp, scallops, and clam bellies, fish and chips, or steak frites. They might also be as elevated as a stuffed lobster with crabmeat and Ritz crackers, local fluke, or a bone-in sirloin steak, chops, or poultry from a wood-burning grill. He's also thinking about offering the option to "smash crabs on the tables" and serving duck from Long Island's only remaining farm, Crescent in Aquebogue. Other regular sources will include Satur Farms, Multi Aquaculture Systems, and Gosman's Dock.

In terms of prices, he said the least expensive starter on the working menu is priced at $12. The dips and spreads, served with pitas or fried bread and intended for table sharing, will likely include crab dip, pimento cheese, and crudite and hummus, and run in the $14 to $18 range. Something like a local fluke entree, which is more expensive to source, will cost around $36. He said he will offer two steak options: a reasonably priced steak frites with more deluxe cuts of meat priced accordingly.

Speaking of some other restaurant menus in the area he said, "I don't want to pay $55 for a branzino that was swimming in Israel or wherever the hell it comes from, when you can get black sea bass right out your back door. I just don't get it." The Millers plan to have "a really good fun bar" in the restaurant, where snacks can be an inexpensive dinner, but tables aren't solely restricted to two and three-course dining either. The space will have "something for everybody, and we think that's what's been missing here."