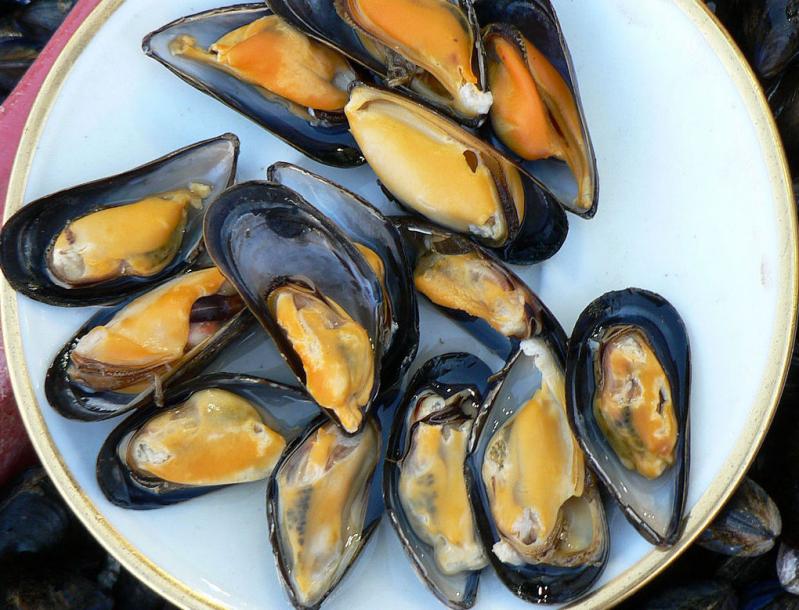 Mussels could be considered the pasta of the bivalve mollusk world. They are cheap, versatile, and easy to cook. Last night I had them in coconut broth with lemongrass and lime wedges served alongside. Tonight a friend is going to prepare them in a Thai green curry sauce. They are abundant in many parts of world and particularly revered in Belgium and France, where they are served with French fries as moules et frites.

There are a variety of mussel species, but the one we are most familiar with is the marine blue mussel, or Mytilus edulis, which has a blue-black asymmetrical oval shell. Freshwater mussels have a large organ called a foot that helps propel them through sand, silt, or gravel. Marine mussels have a smaller foot because they tend to attach themselves to rocks, ropes, or whatever is at hand with their byssus, or "beard."

All mussels are filter feeders, living on plankton and other tiny sea creatures floating around. Some species of mussels prefer salt marshes and quiet bays, while others thrive on rocks in pounding surf. (Their strategy of clumping together enables the interior mussels to stay wet during low tides.)

Most of the mussels we eat are farmed, and about 80 percent of North American cultured mussels are from Prince Edward Island in Canada. You often see this indicated on menus as PEI mussels.

Preparation of mussels varies around the world. In Turkey they are covered with flour and fried or served cold with rice. In China, they are cooked with garlic and fermented black beans. New Zealand has its own species, known as the green-lipped mussel, which is delicious with a chili-spiced vinaigrette.

It is very important that mussels be super-fresh and alive before preparing them. They need to be well scrubbed and have the beard removed just before cooking. Try to cook them the day they are purchased or store them in a refrigerator in a bowl with a wet towel over it. Do not store them in water or suffocate them in a plastic bag!

Because they cook so quickly, it is best to prepare them in a shallow pan, only three-quarters full, so they cook evenly and have room to open. They will tolerate a little bit of overcooking but not much. You should remove the opened ones as you are cooking and set them aside. Some sources say you can eat mussels raw, but I have never been tempted.

Mussels can be steamed, smoked, grilled, boiled, or fried. They are an excellent source of selenium and vitamin B12 and a good source of zinc and folate. Although most of the mussels we eat are cultivated and their water quality closely monitored, it is important to remember that they are filter feeders. In other words, they can retain toxins that pass through them. This is why every mesh bag of mussels sold wholesale to seafood shops and retail to consumers has a tag indicating the who, what, when, and where of their harvesting. Restaurants save these tags so that if some unfortunate customer were to develop a tummy ache, the source could be easily traced.

One of the reasons mussels are so economical is the fact that they can be harvested at 20 months of age. Other shellfish and mollusks take years — the oyster, for example, which takes about seven, or clams, four to five.

About 15 years ago, I harvested some mussels from the jetty between Main Beach and Wiborg's Beach. I prudently checked with a marine biologist friend before I attempted it, and he reminded me to be sure to try to get the mussels that were still partially submerged by waves at low tide. I must say they were delicious, and there is something about free, fresh food, but I think some of the sand remains in me to this day. It's just easier to buy them from a reputable source.

Mussels are a fun food to eat at informal gatherings. The briny smell fills the air and everyone is encouraged to get their hands dirty, dunk pieces of bread into the broth, and pass that bottle of wine. Quick to cook, versatile and compatible with all kinds of herbs and spices, and very economical — what could be better than that?

I’m going to assume that anyone can find a good recipe for moules marinieres, so here are a few more unique ways to serve mussels. The following recipe, if you can call it that, is called moules brule-doigts, or "burn your fingers." This is the way many housewives in the region of Charente, France, prepare them. Serves four as an appetizer, two as a main course.

Thoroughly scrub mussels and debeard them. Heat a large cast-iron skillet over high heat (or try this on the grill outside). When a drop of water sizzles and evaporates immediately, it is ready.

This recipe is adapted from James Peterson’s “Fish and Shellfish.” Sorrel has a natural affinity with seafood, especially shellfish. Serves four as a first course.

Place sorrel in small pot and cook until it releases liquid and turns grayish, about three minutes. Purée in food processor and set aside.

Combine wine, shallots, and parsley in a pot large enough to hold mussels. Bring mixture to simmer, add mussels, and cover pot. Turn heat to high, then check mussels after five minutes. When they have opened, take pot off the heat and discard any unopened mussels. Remove and discard top shells and arrange mussels on half shell on a baking sheet covered with crumpled foil (to keep them flat).

If cooking liquid is sandy, strain it, then boil down to about one-half cup. Whisk sorrel purée and cream into liquid and cook over medium heat for about five minutes, until it has thickened. Season with salt and pepper. Spoon sauce over each mussel, then bake in 300-degree oven for five minutes. Serve immediately.

Linguine With Mussels, Garlic, and Fennel

This recipe is adapted from “On Top of Spaghetti” by Johanne Killeen and George Germon of Al Forno restaurant in Providence, R.I. Serves four as a first course.

Bring a pot of water to boil for pasta. Toast the fennel seeds in a large sauté pan over medium heat until fragrant. Add olive oil, garlic, and hot pepper. Stir and cook just until garlic begins to turn golden. Add mussels, cover pan, and raise heat to moderately high, shaking the pan to distribute mussels. After 30 seconds, lift the lid and add wine and one-third cup water. Cover and cook, shaking occasionally, until all mussels have opened.

Meanwhile, cook linguine in salted water until al dente. Drain, transfer to a heated serving bowl, pour mussels and broth over all, and serve immediately.

Mashashimuet Park's History and Future
A Conference for Young People to Create Solutions
Get Outside, Get Moving
END_OF_DOCUMENT_TOKEN_TO_BE_REPLACED