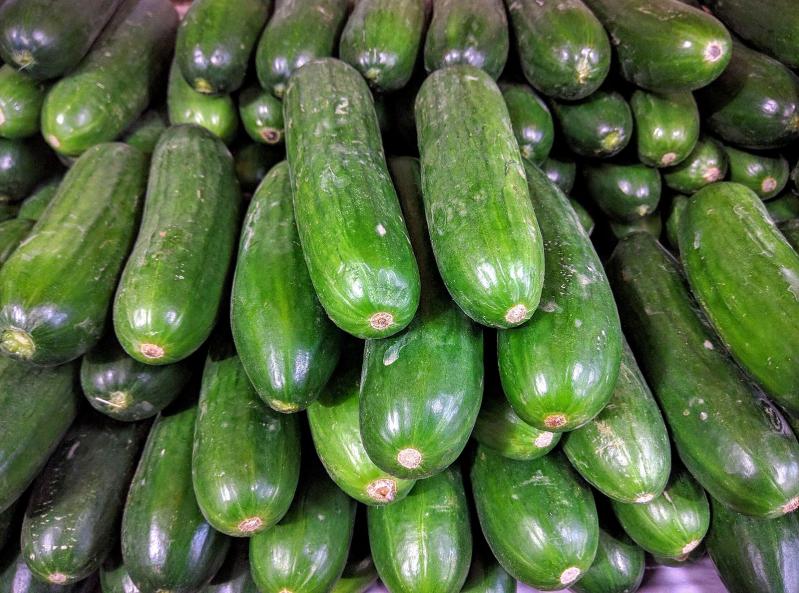 You've probably been eating local cucumbers for weeks. They have been with us since July and the season isn't over yet. There was a time, in early August, when you would have had trouble finding a cucumber that wasn't local. You could easily identify the outsiders by their excessively dark and shiny skins.

In order to preserve cucumbers for their arduous journeys about the continent and so that shriveled exteriors won't betray their age, all cucumbers not from the immediate vicinity are waxed. Although the luster doesn't penetrate below the surface, washing will not remove it.

There are some definite advantages to unpeeled cucumbers and so it pays to buy the unwaxed locals while you still can. The part of the cucumber that isn't water (about 96 percent is water) is cellulose, notoriously indigestible. Although paper-thin slicing and pickling help, there is said to be a substance in the peel itself which facilitates digestion of the pulp. And not only is a better pickle made with the peel still on, it makes for a prettier slice in the salad.

By All Means, Peel

If you are unable to obtain local unwaxed cucumbers and are stuck with the others, by all means peel them. The wax is a petroleum product, tasteless and harmless, but it is impossible to wash the surface of the skin of the cucumber which lies beneath the wax and which might harbor some pesticide residue or bacteria you prefer not to ingest.

Cucumbers, local or not, cost 10 to 20 cents just about everywhere at the moment, the larger ones usually commanding the higher price. (In winter, waxed cucumbers, and small ones at that, may cost 30 cents each.) You are less likely to find unwaxed cucumbers in the big supermarkets. The Green Thumb also has “English” cucumbers from time to time. These are seedless and 18 inches long. Most of the farm stands also carry small pickling cukes in shades of green and yellow at 5 to 10 cents each or 25 cents to 30 cents per pound.

Cucumbers are mainly water and have no food value but people have enjoyed their refreshing quality for over 4,000 years. The vegetable originated in India and Asia Minor. To this day, a combination of yogurt and cucumbers (with slight variations) can be found in all cuisines with any Eurasian overtones, from the Balkans to southern India (where, alongside the curry, it is a handy fire extinguisher).

Chop or thinly slice and macerate* two medium peeled cucumbers. Combine with one cup plain yogurt. Add any (but not all!) of the following seasonings: a minced clove of garlic; 2 Tbsp. fresh mint leaves; 2 Tbsp. minced parsley; 2 Tbsp. chopped walnuts; 1 tsp. powdered cumin; salt; pepper. Chill the mixture 2 to 3 hours before serving as dip, appetizer, or salad. Here are some other cucumber refreshers. Cucumber Salad (serves 3 to 4) Very thinly slice and macerate* one large cucumber, peeled or not, as you wish. Thinly slice one medium onion. Combine half a cup vinegar, one tablespoon sugar, salt, pepper, and some freshly chopped herbs (parsley or dill) and mix with cucumbers and onions. This salad is practically a pickle and will keep for several days in the refrigerator. Sliced tomatoes can also be added just before serving.

Cut the ends off a cucumber. Keeping it intact, carefully remove the seeds. Peel it and stuff the tunnel with about one quarter of a cup of well-seasoned and fairly dried seafood or ham salad. Chill for two hours, then slice into one-half-inch rounds. No discussion of cucumbers would be complete without mentioning pickles. I find most pickle recipes truly amazing. Are we supposed to outdo H. Heinz himself? Cucumbers by the bushel and vinegar or brine by the gallon yield endless quart jars of pickles. Think of storing them! One otherwise sane cookbook suggests you start with 350 cucumbers for a particular pickle!

Here is a good, easy mustard pickle recipe and if the three-pint result is insufficient for you, multiply it by anything you like. (You can also buy an excellent homemade mustard pickle out of a big crock at the farmer's market, $1.10 a pound.)

*Macerate: Draw off some of the water, essential step to the preparation of many cucumber dishes. Simply slice the cucumbers into whatever form required by the recipe, put them in a bowl, and salt well. Place a weighted plate over the bowl to actually press the cucumbers somewhat. Leave them for at least 30 minutes, then drain off the excess water, rinse the cucumbers, and proceed. Macerate was the winning word in this year's National Spelling Bee.