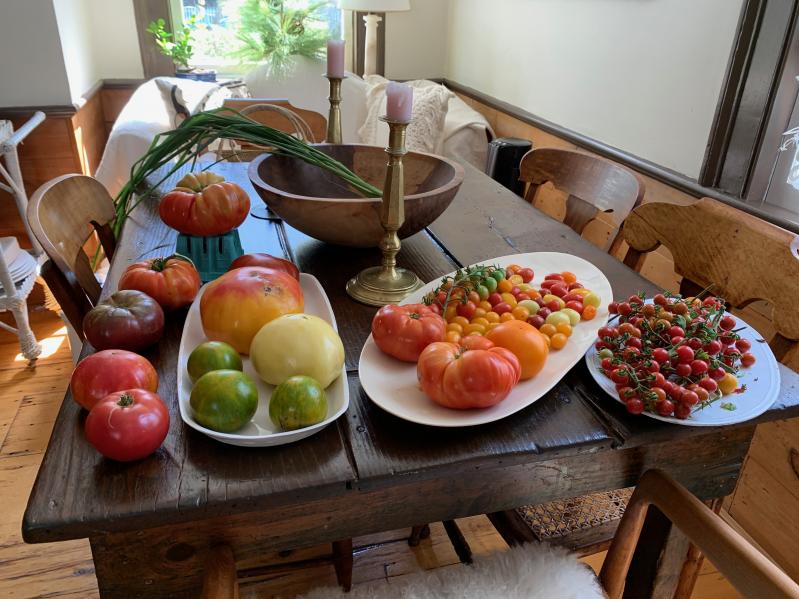 Real tomatoes, grown out of doors and in the sunshine, tasting juicy and fresh, are everywhere. Buy them; you have no excuses. Most of the local farm stands have excellent local tomatoes for about 50 cents a pound. Sometimes you can buy less than perfect specimens for 30 cents a pound, worth a try if for cooking.

The grocery stores selling quality produce are charging 60 to 80 cents per pound for local tomatoes. At the supermarkets you must be careful. They still have those terrible "firm, slicing" tomatoes along with decent ones from various locales for 39 to 69 cents a pound (unless on special).

At the I.G.A. in Amagansett, the price may go down. The A&P's "local tomatoes" (well, New Jersey anyway) are only 39 cents a pound. They do not have quite the rich flavor of the truly local vine-ripened tomatoes, but they are a good buy if you have the patience to sort through the greenish or over-ripe or bruised ones.

Except for the tomatoes on the table in front of some lady's house (Mary, not Lucille), you probably won't find a better buy. (But Mary's taste better.)

Unfortunately, local tomatoes aren't quite the bargain of the year. The season has been very late. Nevertheless, the advantages to vine-ripened tomatoes are gastronomic as well as nutritional (more Vitamin A and Vitamin C). Most of the year you must settle for Florida tomatoes which have no juice or flavor because they are gassed with ethylene so they'll redden (but not actually ripen – they still taste green).

The Florida Tomato Committee has authority to set tomato standards for the U.S. Department of Agriculture (that's like permitting the caterpillars to control spraying). Their regulations (size, weight) have cleverly excluded up to half of the Mexican tomato crop, which is vine-ripened and cheaper! (More than half in the Eastern U.S.)

The Florida growers pick and ship green tomatoes because they can be harvested mechanically (the ripe tomato is the last of the hand-picked crops). "Firm, slicing" should read "firm, shipping."

They have also employed a team of about 20 agricultural experts to develop new tomato surprises for us: tomatoes with thicker skins, squarer shapes, less juice. Not too appetizing but very practical. Given time, people may even forget what tomatoes really tasted like.

Most of mankind survived until the 16th century without being aware of the tomato at all and even after Columbus introduced them to Europe they weren't very popular anyway. They were shunned by some as poisonous, by others as aphrodisiac. Not until the 19th century did the tomato become a major sauce and salad ingredient.

The juicy tomato is so very versatile and capable of enhancing so many dishes, let's not surrender it without a fight. Support your local tomato! I defy you to make a decent sauce from a gas-reddened tomato and slices of pink Styrofoam do not improve a salad.

Excellent summer tomatoes are worth waiting for to enjoy raw and they are the only kind you can cook. (Tomatoes are one of the few vegetables – or fruits? – which, when cooked, do not lose nutrients because the cooking liquid is not discarded.)

Quarts of fresh tomato sauce, home canned or frozen, are a great mainstay when tomatoes are not in season.

Saute onion in oil until transparent, but not brown. Add garlic and cook one minute longer. Add tomatoes and seasonings, and simmer covered for half an hour, uncovered for another half hour. Transfer to sterilized jars and seal, or put in containers and freeze. Makes one quart. If the color is too pale, add a little tomato paste.

Another simple bit of sunshine to store away is tomato marmalade. If you can find them, use yellow tomatoes instead of red ones. The resulting color is gorgeous and most people won't guess your major ingredient. Call it mystery marmalade.

Combine orange juice and lemon in blender jar and blend 10 seconds. Put in a two-quart saucepan and cook over high heat until lemon starts to become transparent. Add remaining ingredients and continue cooking over medium heat until the juices are thickened, 30 minutes or so. Spoon into jelly glasses; cool and seal. Makes four half-cup jars.

Note: Tomatoes can be peeled by plunging them into boiling water for about 20 seconds. When home-canning or preserving, utmost care must be taken to avoid contamination, which can be very dangerous. The risk is considerably less if foods with high acid content are being preserved (most fruits, some vegetables)