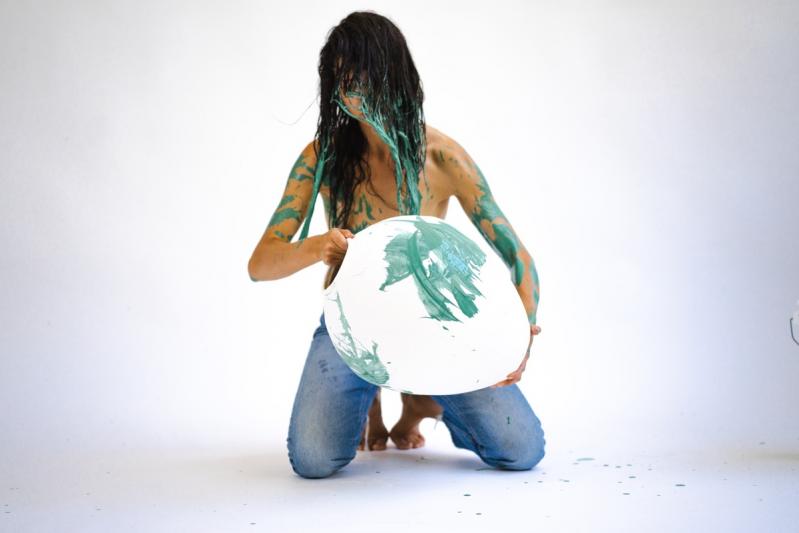 Ms. Corbett dips her hair in a bucket of underglaze to make her moon jar pieces.
Nicole Corbett
By Judy D’Mello

Something about that Leiber house on Old Stone Highway in Springs seems to attract the eccentric and the risk-takers. Judith Leiber and her husband, Gerson, lived there for decades. She, of course, made world-famous crystal-encrusted handbags, while he was a painter, sculptor, and lithographer. They died in that house, hours apart, in 2018.

In 2020, when our opportunities for adventure and risk-taking had narrowed in the outside world, the new owners, Nicole and Peter Corbett, moved in, bringing with them a certain freedom to recalibrate the mood.

One of the first things you might notice about Ms. Corbett is her hair. It's a luxurious outgrowth of waist-length, silky brown tendrils that cascade down her petite frame. It wouldn't be far-fetched to wonder if she's a hair model. Or a shampoo influencer on Instagram. The reality, however, is that her hair is a defining feature for an entirely different reason: It's her paintbrush.

Ms. Corbett, 36, is an artist -- for now, a ceramist who makes large, curvaceous moon jars that she marks with her glorious locks. Seated beside the pool in her Springs home, she exuded calm but with a heightened awareness that's necessary to lure ideas out of the shadows. Her husband, 42, moved in and out of frame in the distance, tending to their magnificent grounds, which include a vegetable plot and a moss-covered shade garden. Two large and rambunctious dogs -- "our children," she said -- were temporarily confined indoors.

After moving full time to Springs and scrubbing up the Leibers' old studio, Ms. Corbett went on a journey of self-exploration. "Including locking myself in the studio and trying different things. . . . Something in my subconscious just popped up and said, 'Use your hair,' so, I let myself try it," she said. "And it was natural for me to combine meditation as part of it in order to really get the courage to try this. It was, and is, an incredibly personal process, a very freeing process. It's cathartic. But it also tests my limits and I try different things in order to put myself in a vulnerable place. So that the marks that come up onto the pieces are honest, they are the truth."

Moon jars originated in Korea, as did her spiritual journey. She was born to Mexican and Argentinean parents in Los Angeles, where her father built a career in the Latin music industry and her mother, who speaks four languages, was an interpreter. Ms. Corbett said she inherited her mother's "good-at-languages gene," which prompted her father to suggest that she become a diplomat. In 2007, while studying international relations ("I squeezed in a minor in photography") at George Washington University in Washington, D.C., she won a scholarship from the Department of Defense to move to South Korea and study Korean, then considered a critical language alongside Farsi, Arabic, and Urdu.

"I ended up living there for a year -- it was supposed to be three months -- and I absolutely fell in love with it. It became the place of my spiritual awakening," she said. "When I wasn't learning Korean, which was about six hours a day, I was at Buddhist temples, studying Zen, and searching for English dharma talks. And it was incredibly impactful."

At one of the temples, she met a Polish woman, a Buddhist nun who invited Ms. Corbett to accompany her on a silent retreat on a mountaintop surrounded by rice paddies. An experience, she said, that transformed her. "I was sick of myself at the time, to be honest," she said with a laugh. "I was sick of the same thoughts that kept coming in my mind. So, I was attracted to Buddhism and Zen, and its ability to train your mind."

Ms. Corbett was required to return to the university in D.C. to graduate. She was then also mandated to apply for a government job in return for her scholarship. She got far in the process of landing a job in the Central Intelligence Agency. "But I think the C.I.A. is very good at vetting people, and they said to me, 'You're going to hate this job. This is not for you.' They did me a favor."

Eventually, she ended up starting a creative agency in D.C. that produced branding work for female-led companies. She met her future husband, who had a similar company that he sold in 2016. The couple were living in New York when they married, and Ms. Corbett's business had expanded to about 15 full-time employees by 2019.

"But my artistic side was screaming, 'Please, no more spreadsheets! No more H.R. conversations!' " After shuttering her company in 2019, she began working with clay "as a response to the digital nature of my previous life and how disconnected that made me feel from my body. Clay is so visceral. It's so physical and I loved that. Your hands get so dirty, you can't even touch your phone, and I was so craving not being around screens."

She learned how to make moon jars (a series of clay coils form the vessels), "but I wanted to get even closer to them. As I was working on that process, I was also going through my own personal process, trying to free myself from so many different things from my childhood, from my time as a C.E.O. and entrepreneur. And from living in the city to living out here."

As a native Spanish-speaker, she volunteers weekly at the Springs Food Pantry, and held a fund-raising benefit at her home this summer for over 200 guests.

Ms. Corbett identifies as bisexual, an important fact, she said, "for representation. Everyone assumes I'm straight because I'm married to a man, but I'm not."

Her work will be on display in a solo show at Colm Rowan Fine Art in East Hampton beginning next Thursday. Included will be a video of her process of marking the jars. She meditates in the film in order to channel whatever comes to her at that moment onto each piece. A couple of buckets of paint are next to her, into which she dips her head. Then, as she emerges, she moves her dripping hair over the pieces, applying the glaze onto the ceramic. There's no blueprint to her movements, no choreography or plan. When she feels it's done, she gets up and walks off, paint splattered over her body and the floor.

There's something primal and deeply sensual about the video. Not because her breasts are bare, but because of the vigorously intense, brawny quality of the process that inexplicably forms something altogether more ethereal, radiant, and serendipitous.

Ms. Corbett acknowledged that the response to the video "has been anything but boring." Women often burst into tears, older men have "straight-up hit on me right after watching it, and I've had people be really concerned about me."

A few weeks ago, Ms. Corbett was part of a multidiscipline festival at LTV Studios in Wainscott. The video, previewed on the first night, was to play again on the second night along with a 40-piece orchestra. Then, a few minutes before it was set to screen, she was told that a V.I.P. guest from the previous night had been offended by the nudity in the video. "Therefore the organizers decided to cancel my part of the program," she said.

In this world of punishing, all-consuming rituals of meritocracy, we have created perhaps the most boring and cultureless middle class in history. How comforting to know that in a particular corner of Springs, torchbearers for the value of trying difficult things and being unafraid to fail, live on.