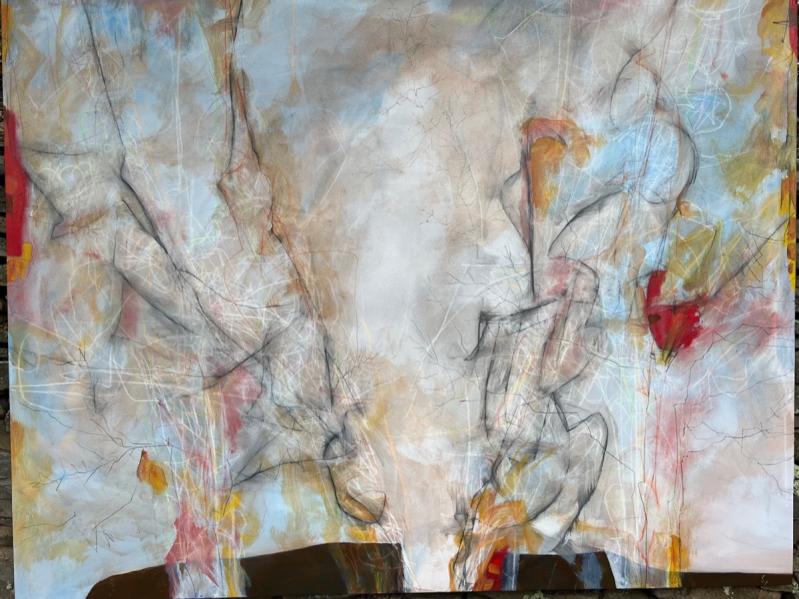 Dan Welden's "Desiduous Dance" is part of "A Celebration of Trees" at the Southampton Arts Center.
By Jennifer Landes

The Southampton Arts Center has established itself as having a community approach to programs, whether concerts or film series, studio or meditation classes, talks or dance, and even programs for children.

Its exhibition space is handled much the same way. The old Parrish Art Museum galleries are finding new life through a talented pool of curatorial talent and their unique visions for how to show local artists thematically.

The latest exhibition of this nature is "A Celebration of Trees," which has taken over every inch of the space. It features artwork by well-known and less familiar names from the East End juxtaposed with some international art stars.

Here, Laurie Dolphin, Daniela Kronemeyer, and Coco Myers are the curators in charge, and their selections for this "ecological multimedia art exhibition created to educate and expand thought and consciousness about the world's vast network of trees" are too many to list.

So let's take a look at some highlights and celebrate some trees. As numerous as the mediums in the show (paintings, sculpture, photographs, even Susanna Bauer's leaves and cotton thread) are the interpretations of the subject matter and theme. Many are quite literal but others can take a less direct turn, like Idoline Duke's "Tree of Life," a beautiful blue-and-white, Eastern-inspired meditation, or Freeman Vines's guitars made out of hanging trees and Tim Duffy's photos of him with them.

Charles Gaines's whispered drawings are quite literal but barely there, and the extra effort to see them increases a viewer's engagement. Jack Leigh's photos are straightforward in black-and-white gelatin silver prints, which make them more lyrical. Still, his compositions, while including trees, often capture people interacting with them, whether swinging from a rope, sitting in their shade on bleachers, or fishing under one by a stream.

Sculptures are either made of wood, like one of Franco Cuttica's familiar horses and Aurelio Torres's shaped and stacked reclaimed lumber, or they offer reasonable facsimiles. Donald Lipski's recurring sculptures from his "Exquisite Corpse" series fall into the latter category. A result of a collaboration with Jonquil LeMaster, a master artisan of artificial trees, the trunk-like forms are transformed into twists, knots, and a triangle, causing pause and wonder.

Beth Moon's photographs are also a source of wonder. Looking like flights of fancy, her baobab trees from Africa are quite real and the result of study and watchfulness as she scouts the best angle and light for capturing them before her shutter clicks. Her negatives are scanned and enlarged on a computer and then used in a complicated process to yield a platinum print. She is known internationally, and her contributions to this show are not to be missed.

Kryn Olson's apparent trunk cross section, "Savannah's Heat," is a Fauvist interpretation in acrylic on canvas and mixed media. It is a good example of minimal means used to express something real and larger than what it first seems.

Arlo Namingha's "Mother Earth" series is composed of wall sculptures of rich and specific wood types in striated layers or simple blocks in a frame. They have elements such as African mahogany, curly maple, and poplar woods in one piece or poplar, yellow heart, and curly maple in another. The conceptual element of these works adds another layer to the overall experience of the exhibition and underlines the thoughtfulness in how the curators went about their work in gathering pieces suitable for it from a variety of directions.

This is just a smattering of what's available to see from the dozens of artists assembled, including Shirin Neshat, Kiki Smith, Andy Warhol, April Gornik, Michael Butler, Philippe Cheng, William King, Ned Smyth, and so many others. No summary can satisfy all of the pieces worthy of mention, so go once and go often to witness this eclectic, surprising, and captivating mix.

For those in an acquisitive mood for the holidays, many of the works are on sale, ranging from about $800 to $100,000. It is also worth noting that the show has partnered with the Archangel Ancient Tree Archive, a nonprofit organization that creates "libraries of old-growth trees for the purpose of functional reforestation."

The show will close on Dec. 18, and the center is offering a number of programs in conjunction with it through Dec. 17, when a closing reception will feature folk music by Elizabeth LaPrelle and Brian Dolphin. Other programs, including a free tour of the show by its curators and some of its exhibitors on Sunday at noon, are listed on the center's website.