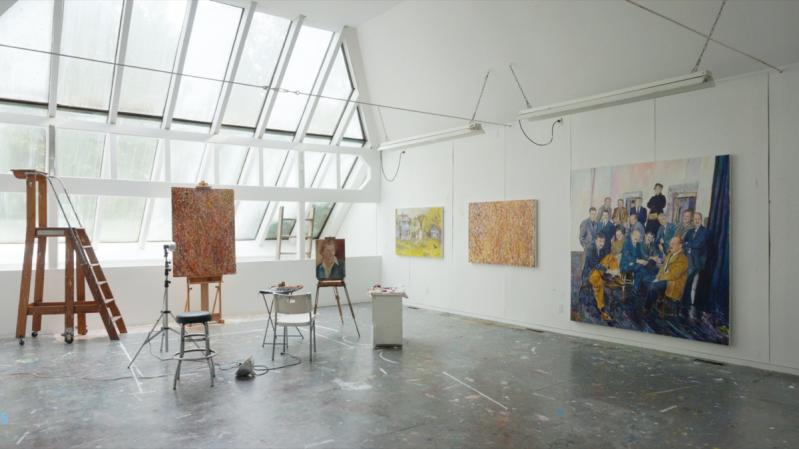 A view of the studio interior during Keith Mayerson's 2019 residency at the Elaine de Kooning House in East Hampton.
Katherine McMahon
By Mark Segal

“As it stands today, the Elaine de Kooning House and Studio, in both context and form, represents a confluence of events that symbolize the zenith of a significant artist’s career.”

So says the nomination of the site to the State and National Registers of Historic Places, prepared by Karen A. Kennedy, director of architectural history at Preservation Studios in Buffalo. The nomination was announced by Gov. Kathy Hochul in December.

“The property remains not only as the site where a significant female artist once created remarkable canvases but also as a reminder of a time when the East Hampton art colony began once again to flourish with the arrival of a new generation of artists,” Ms. Kennedy concluded.

Elaine De Kooning bought the property in East Hampton’s Northwest Woods in 1975. She added the studio three years later and created her last important bodies of work, the “Cave Walls” and “Cave Paintings,” there between 1985 and 1988.

After her death in 1989, the artist John Chamberlain owned the property until he built his own studio on Shelter Island and sold it to the painter Richmond Burton. Mr. Burton owned it until 2010, when it was purchased by the current owner, Chris Byrne. Mr. Byrne is a curator, the author of the graphic novel “The Magician,” a co-founder of the Dallas Art Fair, and the former chairman of the American Visionary Art Museum in Baltimore.

Mr. Byrne knew Mr. Burton, who first considered selling the property in 2008. During the slump in the real estate market, he would ask how it was going. Mr. Burton told him there were interested people, but they would talk about knocking down the studio or making it an "air hockey-table room."

“There wasn’t really consideration for the history of the house,” said Mr. Byrne. “I love the Pollock-Krasner House and Study Center, because you can see the work that they made there, it’s amazing, and it’s very simple and modest in many ways.”

After buying the house and land, Mr. Byrne began “kind of learning on the job. Elaine did so much, as we know, but there wasn’t really a major monograph at that time, and there wasn’t a biography devoted just to Elaine.”

Within a few years, however, “the stars started to align.” A major retrospective of Elaine de Kooning’s portraits was organized by Brandon Brame Fortune at the National Portrait Gallery in 2015. “It was very erudite . . . and got very specific in terms of which portraits were made in the house.”

As Mr. Byrne said, “A certain period of time has to pass for a site to be considered historical, where posterity takes over,” and the recognition de Kooning received over the past decade has made that happen.

He also noted that the artist had reviewed exhibitions for ARTNews at a time when painters who are now famous were relatively unknown. “She was on the front lines for many of those artists.” In some ways, he said, the breadth of her accomplishment -- her commitment to portraiture as well as Abstract Expressionism, her role as a critic, her extensive teaching resume -- “took longer to map.”

Since Mr. Byrne bought the property it has hosted events, exhibitions, and informal residencies for some 30 artists. Frank Benson is working there now, and Laurie Anderson is set for a residency starting in April.

Whether the nomination will lead to changes, such as regular public hours, is unlikely, at least for now. But the house has a website, and “if someone emails and wants to visit, we can usually accommodate them,” said Mr. Byrne.

Of the house itself, he said, “It’s not a Breuer building, but in terms of her importance, being here for a certain period and producing these bodies of work here, I think that’s the key thing.”