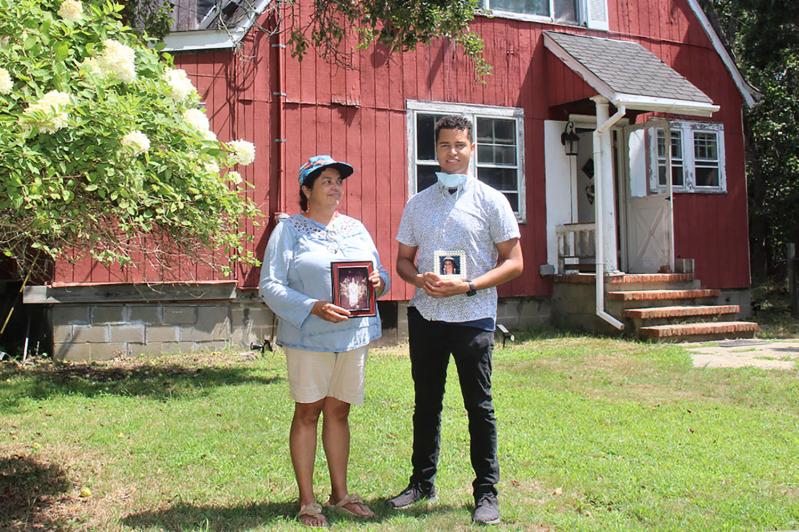 Denise Silva-Dennis and her son, Jeremy Dennis, in front of Ma’s House on the Shinnecock Reservation.
Durell Godfrey
By Mark Segal

Native Culture
"The Song Bird Series," a benefit concert featuring the Thunderbird Sisters and Starlight Tyler, will bring a celebration of Native American culture to The Church in Sag Harbor on Saturday at 5 p.m.

Beginning in 1973, the Thunderbird Sisters, members of the Shinnecock Nation, performed in gatherings including women's music festivals in the Midwest, with Pete Seeger in various venues including his Clearwater Folk Festivals, and at countless Native Gatherings. They were awarded a Native American Music Award (NAMMY) for their first album, "Still Singin'," in 2000.

Ms. Tyler is a Cherokee-Aztec singer-songwriter, humanitarian, and NAMMY nominee whose music blends the sounds of classic jazz with the earthiness of the blues.

Tickets are $25; all proceeds will benefit Hamptons Community Outreach's efforts to end the housing crisis on the Shinnecock Reservation. A silent auction will coincide with the concert.

Residency Programs
Next up in the Watermill Center's Viewpoints conversation series is a panel discussion featuring directors from East End artist-residency programs who will discuss various opportunities for artists and writers on the North and South Forks.

Set for next Thursday at 6 p.m., the panel will include Jeremy Dennis of Ma's House on the Shinnecock Reservation, Christina MacDonald of the Further On Artist-in-Residence program in Amagansett, Anthony Madonna of Guild Hall, Tucker Marder of Folly Tree Arboretum in Springs, Nicole Martorana of the Watermill Center, Sheri Pasquarella of The Church in Sag Harbor, and Dhruv Patel of the Potato Farm Project in South Jamesport.

Among the more than 80 items on offer are a seven-night Viking European River Cruise, golf for two at the Bridge Golf Club with the actor Richard Kind, two V.I.P. New York Jets tickets, a wine cellar tour for six with Roman Roth at Wolffer Estate Vineyard, an autographed recently released book set by Julie Andrews and Emma Walton, and a script review with Scott Schwartz, the theater's artistic director.

Bidding will remain open until noon on Dec. 4.

LongHouse Illuminated
LongHouse Reserve in East Hampton will brighten its garden paths with luminaria and glowing sculptures and open them on upcoming Friday and Saturday evenings, starting Friday and continuing through Dec. 17. Carol singers will be on hand, and holiday snacks and warm beverages will be available in the pavilion market.