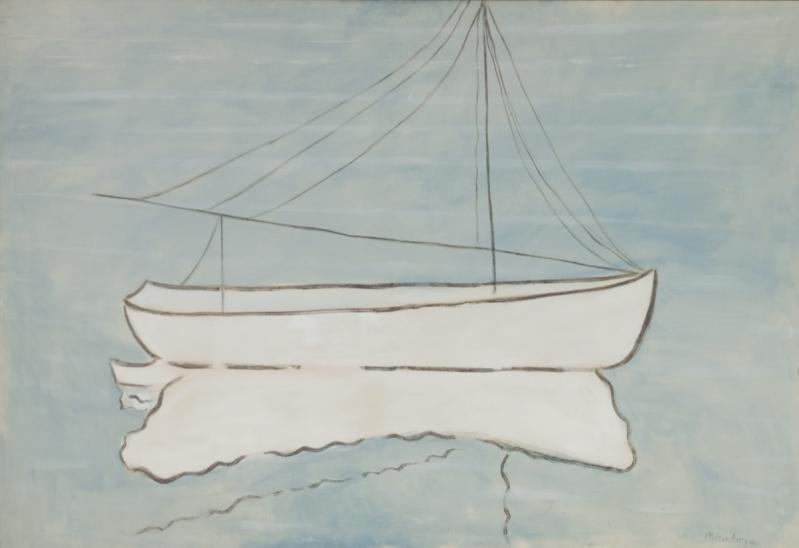 "Solitary Boat" was painted by Milton Avery in 1960.
Via the Milton Avery Trust and Waqas Wajahat, New York
By Jennifer Landes

Only a couple days remain for the exhibition "Milton Avery: A Sense of Place" at the Phillips auction house gallery, but it is worth the drive to Southampton to see this unique and insightful show.

Don't expect a "greatest hits" of Avery's oeuvre with a straightforward chronological installation. This is a broader evaluation based on the locations where Avery set up his easel, either literally or figuratively, since much of his compositional inspiration was based on something he might have seen but channeled into his works either moments or years later.

There are some current and pending Avery exhibitions, but this one is different. At the Wadsworth Atheneum in Hartford, the museum is focused on the years he painted in Connecticut. The show organized by London's Royal Academy of Arts that will open in Fort Worth this fall is a broader retrospective, for which this show can be seen as precedent, but in a more manageable way. Works such as "Hint of Autumn" on view here will become part of the larger exhibition after leaving here.

The old town hall that Phillips occupies, like Christie's sleek new space in Southampton in an old renovated garage, is a striking exhibition space that plays up whatever art is shown there. A tour last Thursday with Robert Manley, Phillips's deputy chairman, Waqas Wajahat, a curator of the exhibition, and Sean Cavanaugh, Avery's grandson and a co-curator, illuminated the artist's life and career.

Mr. Wajahat pointed out that this could be the largest showing of Avery's work from 1929 to the 1960s seen on the East Coast in quite some time.

Immediately apparent is how visionary his work is, particularly for someone of his generation. Avery lied about his age to his potential in-laws, changing his birth year to 1893, so he could marry Sally Michel, who was 17 years his junior, according to Mr. Cavanaugh. As a result, his real birth year of 1885 was not published until it was discovered during the research for a 1982 retrospective at the Whitney Museum of American Art.

This younger assumed age also attracted younger artists, such as Adolph Gottlieb and Mark Rothko, to his circle. In a time of great innovation and change, these artists may not have been interested in following someone who was significantly older than they were, Mr. Wajahat observed.

The works on view, on both paper and canvas, demonstrate a preference for European modernism, particularly that of Henri Matisse. Those who shared Avery's vision, such as the tastemakers Alfred Barnes, Roy Neuberger, and Duncan Phillips, were collecting his work by the 1930s.

Avery, who sometimes painted more than one canvas a day, was able to do so because of confidence and an ability to walk away from mistakes and keep moving forward, Mr. Wajahat noted, crediting Edith Devaney's observations in her essay for the Royal Academy catalog.

With all of that available "product," it would have been easy to concentrate, as others have, on one specific place or time, but that was not the aim here. "It's difficult for the layperson to grasp a 50-year span of a person's career," Mr. Cavanaugh observed. Pointing from one of the earliest paintings from Coney Island to one of the latest works, across the room, he said, "That's different eras, different worlds." The curators wanted those worlds seen together.

Narrowing an artist's output into simplistic boxes, a marketing strategy often employed by commercial galleries, "creates an audience that doesn't understand art at all. It only understands art as a commodity," Mr. Wajahat added.

As well as the leaps forward and back in styles and degrees of abstraction, there are also examples of how Avery worked. In "Red Anemones," the viewer might assume that the artist placed the vase and the objects just so and painted them from life. Rather, Mr. Wajahat said, it was much more likely that he "would be on his way to the kitchen to get a glass of water . . . sees the anemones in a blue vase, sees the little animals," a glass alligator and a ceramic piece his daughter, March, made in a ceramics class, "and by the time he's come back to his easel, he's composed a picture. . . . It got completely arranged in his head."

The exhibition is on view through Saturday. Many of the works are available through private sale or will be sold at auction, including three from the estate of the actor Peter O'Toole, part of a sale in London in October.