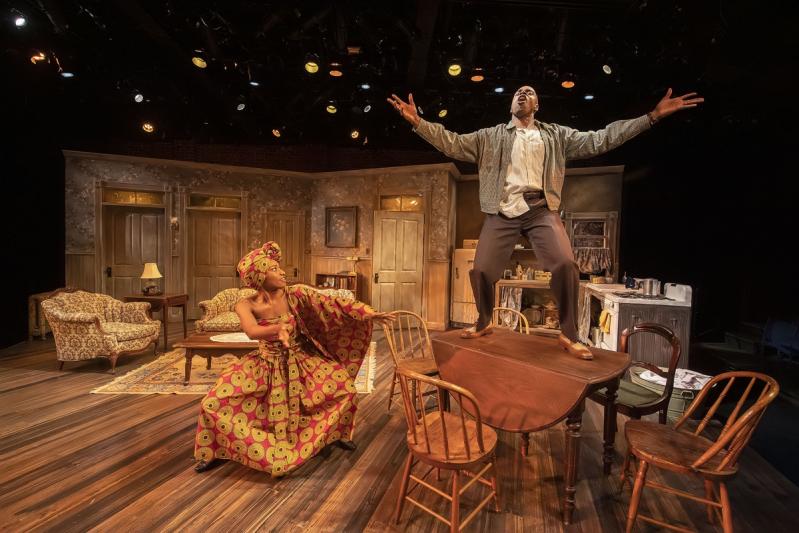 A scene from "A Raisin in the Sun," Bay Street Theater's 2019 Literature Live! production
Michael Heller
By Mark Segal

If the idea of combining "Macbeth" with "One Flew Over the Cuckoo's Nest" piques your interest, then hie thee to the box office or website of Bay Street Theater in Sag Harbor for tickets to its upcoming virtual Literature Live! production of "Macbeth," which will be available for streaming from Tuesday through Dec. 5.

Set in Scotland in 1963, the adaptation of Shakespeare's play does not alter the original text, but instead of the Castle Inverness, its dramatic scenes unfold in a "chilling and sterile" sanitorium. It was filmed live on the Bay Street stage and edited as a theatrical production.

Directed by Allen O'Reilly, the theater's director of education and community outreach, the adaptation will feature seven actors who play a total of 24 roles. The cast includes Matthew Henerson as Macbeth, Erin Margaret Pettigrew as Lady Macbeth, Genevieve Simon as Malcolm, Joe Pallister as Macduff, Teresa DeBerry as Ross and the Witch, Gabe Portuondo as Banquo, and Mr. O'Reilly as King Duncan.

" 'Macbeth' is a piece that I have worked on numerous times as both an actor and director," Mr. O'Reilly said. "Yet every time I revisit this play I find nuance and depth that gives the words a fresh feel. I am thrilled to take my next journey with Shakespeare's masterpiece alongside the extremely talented artists here at Bay Street."

Literature Live! is a BOCES-approved Arts in Education program designed specifically for middle school and high school students, with their teachers and administrators. Plays are supported with teacher-developed lesson plans and reference materials. All performances are free for school groups.

"Macbeth" will be available at no charge for on-demand streaming to school groups starting Monday and continuing through Dec. 5. Sign-up information is on the theater's Literature Live! education page.

Tickets for the general public are $20. The virtual premiere, set for Tuesday at 8 p.m., will be followed by a conversation among the show's creators and actors.