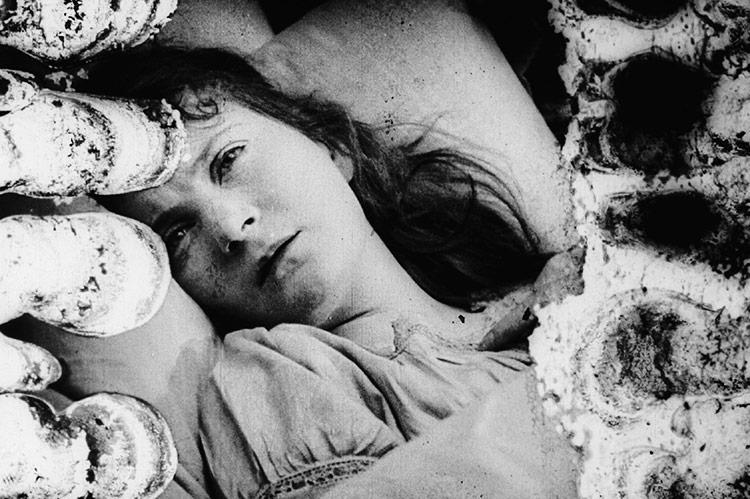 A frame from the 1917 film “Polly of the Circus” shows signs of the water damage that affected much of the footage discovered in Dawson City.
By Mark Segal

With the approach of the Oscars and the Iowa caucuses, polls and predictions have dominated the news. One half-page newspaper ad trumpeted a film that was on 225 best film lists. Time will separate the winners from the losers and the lasting achievements from the fleeting successes.

At the end of last year, with a bit more perspective, many film critics picked their favorite films of the 2010s. It’s no surprise that such titles as “Phantom Thread,” “The Irishman,” “Parasite,” and “Get Out” made the cut.

One less familiar title that appeared on no fewer than nine such lists, including those of critics from The New York Times, Vanity Fair, The Los Angeles Times, the Associated Press, and Vox, is Bill Morrison’s “Dawson City: Frozen Time.” While it was screened at the 73rd Venice International Film Festival in 2016 and had a six-week run in Manhattan a year later, it has not been widely released in theaters.

Thanks to Giulia D’Agnolo Vallan, the founding artistic director of the Sag Harbor Cinema, “Dawson City” will have its Long Island premiere as part of the Here Comes the Cinema! series on Feb. 16 at 2 p.m. at Bay Street Theater in Sag Harbor. In his New York Times review of the film, Glenn Kenny, referring to the scope of film history, wrote “ ‘Dawson City’ now enters that timeline as an instantaneously recognizable masterpiece.”

For more than 20 years, Mr. Morrison, who divides his time between New York City and Riverhead, has mined film history for archival footage that he appropriates, recontextualizes, and combines with contemporary music to create stunning cinematic meditations that celebrate both the fragility and endurance of time and the moving image.

Mr. Morrison’s use of archival footage first appeared in his “The Film of Her,” a 12-minute film from 1996 that illuminates the paper print collection at the Library of Congress. That collection consists of contact prints of early silent films on rolls of photographic paper, made by producers because photographs were protected by copyright before 1912, but motion pictures were not.

While the paper prints were deposited before 1912, they were  rediscovered only in 1939, and it wasn’t until 1953 that the process of reconstructing the movies on film stock was undertaken. “The Film of Her” tells the story of the paper prints’ rediscovery and reconstruction through carefully assembled archival footage and voiceover interviews.

Since then, Mr. Morrison has made six feature films and more than a dozen shorts using archival footage shot on nitrate film. Often in various states of decay due to its susceptibility over time to decomposition, nitrate was used in most motion pictures until it was replaced in the early 1950s by acetate safety stock.

Over the years, Mr. Morrison has moved from a relatively non-narrative cinema of images and music to complex works that use archival footage to tell stories, among them meditations on coal workers in northeast England and the great Mississippi River flood of 1927.

“I find that projects about a specific event or place or time give me a parameter to explore what footage is available,” he said. “Also, conversely, if I find a great piece of footage or a great story that’s related to footage, like the Dawson City story, it gives me a way to tell that story and use that footage. I’m usually working both angles.”

In 1978, a construction crew accidentally discovered 533 silent film reels dating from the 1910s and 1920s that had been buried for decades in permafrost in Dawson City, a town on the Yukon River in northwest Canada that was the last stop on the film distribution line. “I had known about it since my art school days,” said Mr. Morrison, “and I thought there would be enough there that the story could be told. For people interested in archival film it’s sort of a mythological story.”

While documentary footage of the discovery, known as the Dawson City Film Find, frames the film, there are many strands to the city’s history, perhaps the most important being the discovery of gold there in 1896, after which what had been a fishing camp inhabited by the Hän, an indigenous people, was founded as Dawson City.

The population swelled to 40,000 by 1898. The story of the gold rush and the city’s boom is told through a variety of sources, including clips from such silent films as “The Trail of ’98” and Chaplin’s “The Gold Rush,” arresting documentary photographs taken by Eric Hegg between 1897 and 1901, other archival film footage, and intertitles written by Mr. Morrison. Like the silent cinema for which “Dawson City” is an elegy, there is no voiceover narration.

The film elucidates the greed and profiteering that followed the discovery, the relocation of the Hän and the ruin of their hunting and fishing grounds, the environmental destruction caused by dredging and hydraulic mining, and the shifting fortunes of the city, whose population dropped by 75 percent by the end of 1899, after gold was discovered in Nome, Alaska. By 1950, Dawson City had fewer than 900 residents.

The long-term instability and flammability of nitrate film constitutes another through line. The first major nitrate fire took 126 lives in 1897 in Paris when a Lumiere projector caught fire. A box of 10 films ignited in 1913 in Dawson City’s Amateur Athletic Association building, and that same year Robert Flaherty’s lit cigarette accidentally destroyed the first 30,000 feet of “Nanook of the North.”

While nitrate film can break down over time, the footage from the Dawson City Film Find shows no such deterioration, in part because the films had been buried in permafrost. However, water damage created noticeable white streaks along the edges of many of the frames, which have come to be known as “Dawson flutter.”

The film clips are identified as either from the Dawson City Film Find or, in the case of footage from the paper prints collection, by the title and year of production. Mr. Morrison used about a dozen prints from that collection. “Basically anything that dealt with the Klondike Gold Rush I worked in somehow,” he said.

What finally moved Mr. Morrison to undertake “Dawson City” was an invitation to Ottawa to show his film “Decasia.” The invitation came from a curator who worked at the Library and Archives of Canada and said he could arrange for Mr. Morrison to access the collection there.

“He said they had the entire collection of the original nitrate from Dawson City. A lightbulb went off that he would be a friendly curator to work with, and I could really start to explore what that collection had to offer. My hunch was that it was so vast that I could tell whatever story I wanted to by using its images.”

Original music is a central element of his films. “ ‘Dawson City’ was a film about silent film. The music plays a large role in silent films, so I understood that music was going to be important. I was looking for an ethereal, lonesome sound. The insurgence of capitalism came and disrupted that community and then continued to eat away at it throughout the century. There was sort of this inexorable and unavoidable tragedy.”

Alex Somers, who composed the music, told CBS News said he wanted the music to sound like it was coming apart at the seams and decaying, like the film’s images. “I think that was the main thread running through the whole thing — the idea of something being worn out and beaten up and forgotten,” he said.

Mr. Morrison and Ms. Vallan will discuss the film after the screening.