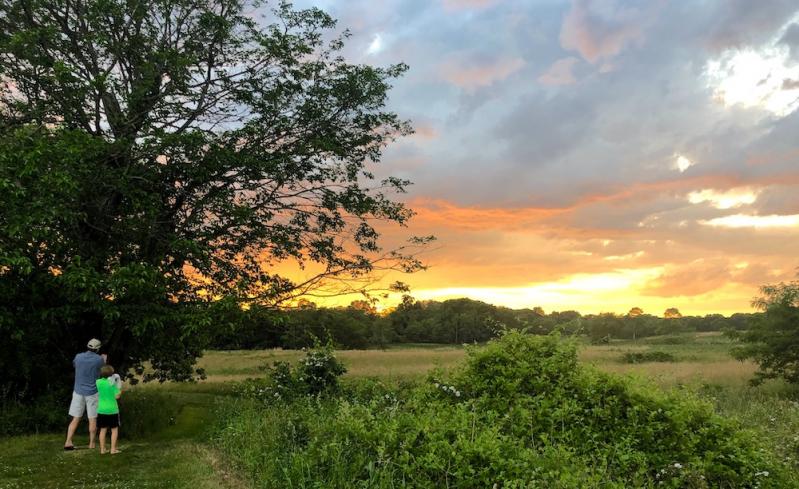 Ninety-two percent of those surveyed by the Nature Conservancy in early June support making parks, open space, and natural areas more accessible all over the state. Above, the Mashomack Preserve on Shelter Island, one of the conservancy's more than 1,340 preserves in the United States.
Carissa Katz
By Christopher Walsh

Six months after the first diagnosis of Covid-19 in the United States, 7 in 10 New York State voters believe that recovery from the coronavirus pandemic presents an opportunity to realign our relationship with the natural world and plan for future challenges including climate change, according to the Nature Conservancy, which operates more than 1,340 preserves in the United States.

The early June survey of 640 randomly selected voters likely to vote in the Nov. 3 election showed that almost 9 in 10 support restoring some of the jobs lost in the pandemic by building a clean-energy industry, with 67 percent registering strong support for such a policy.

"We have this new problem which is super-important to focus on," Alison Branco, director of coastal programs for the Nature Conservancy in New York, said of the coronavirus pandemic, "but that's also a distraction from all the other major problems we're working on." The survey, she said, shows that "more than ever we have to keep our eye on the ball with these long-term problems while also dealing with the current emergency."

Ninety-two percent of those surveyed back investment in natural and man-made infrastructure to protect New York against natural disasters like severe flooding, storms, and fires. Flooding and sea level rise, Ms. Branco said, are especially threatening to Long Island. "How are we going to change the way we live and work so we can survive the flooding we already have?" She asked. Gov. Andrew M. Cuomo has made a transition to renewable energy a priority, but "regardless of how great a job we do on renewable energy, there are still years of climate impact" based on past and present greenhouse gas emissions.

Recovery from the virus that threatened to overwhelm hospitals and health care workers in New York and other Northeastern states, and is now registering record infection numbers in Southern and Western states, offers an opportunity to plan for climate change by deploying resilient and renewable energy sources including offshore wind, according to the survey.

A desire to create a more livable planet and a back-to-Eden spirit are strong among New Yorkers during the pandemic, said Jess Ottney, the Nature Conservancy's New York policy and strategy director. "New Yorkers don't want to return to the past as it was," she said. "They want to see changes."

"I was not surprised but excited," she said, "to see that 7 in 10 believe recovering is an opportunity to take on these challenges like climate change. New Yorkers still very much believe climate change is real, it will affect them, and we have to do something about it. New Yorkers can take that long view while also dealing with a crisis that's immediate for them and affecting their families."

Around the world, activity came to a standstill as the coronavirus swept across entire continents. Greenhouse gas emissions dropped significantly, and the attendant reduction in air pollution brought clear skies over cities around the world. Wildlife ventured into places long abandoned because of human encroachment. As cities and nations reopen, limiting vehicle traffic on some city streets to create space for activities like exercise, outdoor dining, or recreation is favored by three-quarters of New Yorkers surveyed by the Nature Conservancy. Ninety-two percent of those surveyed also support making parks, open space, and natural areas more accessible all over the state.

The novel coronavirus is believed to be zoonotic, an infectious disease transmitted from animals to humans. Such events are likely to continue as civilization encroaches farther into nonhuman habitats, said Rameshwar Das of Springs, who sits on the arts committee for the Nature Conservancy's Andy Warhol Preserve Visual Arts Program in Montauk. The pandemic, he mused, is symptomatic of life out of balance. "It's clear that this is something that's been coming down the road for a while," he said. "It also feels intuitively that, as things get thrown out of balance by our human depredations, we may get more of these. . . . This human-animal disease transmission stuff is certainly a symptom."

"We have really pushed nature to its limit," Ms. Ottney said. "We need to protect habitat and space for nature, frankly, because we rely on that nature. If it's unhealthy, if it doesn't have a place to go, that's a problem for humanity." The International Union for Conservation of Nature, she said, concludes that "nature is at a tipping point. . . . We're getting to a point where the footprint of our society is really encroaching on nature to a point that's dangerous for everyone. We need to get back into balance, or we suffer the consequences."

"The fact is that we're destroying the animal habitat, so we're in closer proximity to wildlife," Mr. Das said. "Even on the local level, that we have so much Lyme disease is probably a symptom of both climate change and change in the wildlife populations."

For some, the pandemic has brought a spiritual awakening. "Others might call it something different," Ms. Branco said. "But it causes you to take a step back and think about what's really important. We're seeing that a lot of people got really busy with jobs, kids, life, money, and forgot about how important the environment is. It really is important to your survival. Hopefully this will lead to a lot of changes in behavior that prioritize what we know is important."

Living on the coast carries risk, she said. "The ocean is a powerful force. Building a wall is not going to stop everything. We need to build our lives around that. Then, the ability to be outside, to have clean, safe drinking water, clean, safe water to swim in, clean, safe food, clean, safe air to breathe — all are entirely dependent on the environment. We need to stop taking it for granted."

The survey, Ms. Ottney said, shows an understanding that investing in clean air and water promotes public health, economic recovery, and a sustainable future. "We believe offshore wind is an example of one way we can build responsibly but also more sustainably," she said. The state's plan to be carbon neutral by 2050, all but eliminating greenhouse gas emissions, "is a big opportunity in responsibly developing, and also to create jobs in the renewable energy sector with solar panel installation and upgrading buildings to make sure they're more efficient."

"As we work to recover from this crisis and also plan our communities for the future," she said, "we need to think about concepts like smart growth, developing in areas already impacted so we're leaving natural areas undisturbed. Certainly on Long Island we have a lot of development, and not a lot of open space left."

"People of good will can help to counteract the negative stuff that's being done to the environment," Mr. Das said. "We are coming to that moment where we're going to have to change. And I think the primary change is the attitudinal one: Seeing that we're not really separate from either our awareness or our environment. It's all one fabric. I think that realization, on a societal level, is really going to be required."