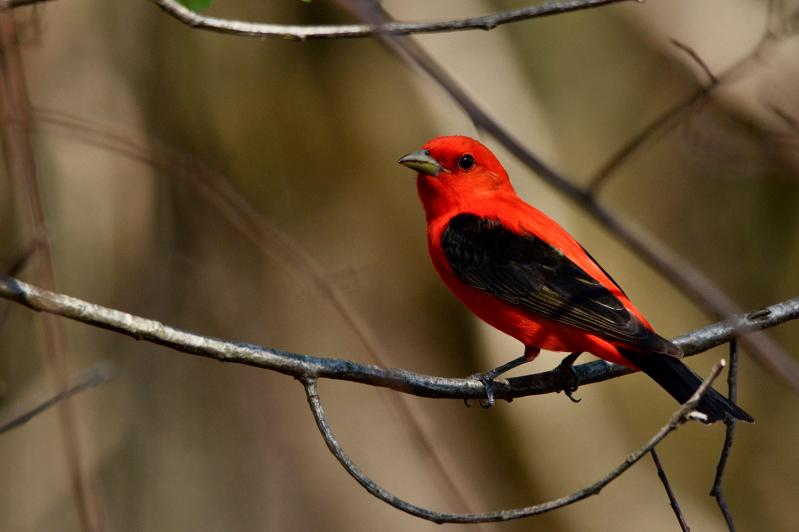 Listen for the “chick-burr” call of the scarlet tanager and you may be able to spot one in the woods.
Jay Rand
By Christopher Gangemi

By Memorial Day the nymph ticks are out, a light green veil of pollen covers most surfaces, trees are heavy with leaves, clouds of insects hang suspended, and many migrant birds have bypassed the East End for points north. Our local breeding birds take over.

Migration makes headlines because of the volume of birds, and for the possibility of seeing rare, once-a-year birds. If you are tuned to the right station, it's a celebration. With the breeding birds, intimacy prevails. If you find them in their niche, communicating, working on building a nest, or raising their young, you get to appreciate our habitats in a new light. The scarlet tanager is part of our local breeding bird bounty and it's the best-looking Hamptons songbird you've never seen.

As its name implies, the male is bright red-orange, molten, with obsidian-colored wings and tail. An old nickname for the scarlet tanager was "firebird." You could imagine them flying out of volcanoes. They're smaller than robins, but larger than sparrows. They're striking birds with chunky pale bills. The females look nothing like the males; you won't spot a red or black feather on their bodies. Instead, they're uniformly dirty yellow, with contrasting olive green wings.

A prerequisite to finding a scarlet tanager is, oddly, learning the song of the American robin. The robin sings at dusk reminding us that, whatever just happened during the day, it's time to look up and be cheery. "Cheer-up, cheer-ily. Cheer-up, cheer-ily," it seems to say. Birders often say the scarlet tanager sounds like a robin singing with a cold. But I'm tired of colds and viruses. The tanager's song is slightly faster than the robin's, but with a heavy, burry quality to each note. Let's say it has more humidity, like the summer months during which it sings.

The scarlet tanager also has an easily recognizable call note. Both males and females repeat a neat "chick-burr" from behind the oak leaves.

Once you get the song down, you have to be in the right habitat, and listen. Scarlet tanagers breed in "forest interiors" so you won't find them at your feeder generally, or nesting in your yard. Go take a walk on the Sprig Tree Trail in Sag Harbor, or along the Round Pond Trail where they sing and breed. You'll also find them at the Grace Estate, Hither Woods, and Barcelona Neck. The trick is to find a large expansive stretch of woods and listen. Then look up. These birds are often high in a tree.

As large tracts of forest get chopped up, the scarlet tanager will lose breeding grounds. The smaller the tract, the more susceptible they are to predation by the noxious brown-headed cowbird. It's also worth noting that scarlet tanagers are long-distant migrants. The birds that are breeding in Sag Harbor had to cross the Gulf of Mexico to get here. They'll have to cross it again in a few months.

Pause to let that sink in. It's astonishing.

Once I was walking in the woods with my daughter and we watched a scarlet tanager find its mate on a branch, maybe 50 feet from the ground. He approached the nest, but just before, sallied off a branch and captured a large moth in his beak. Tanagers eat mostly insects, including gypsy moths and wasps. If their prey is large enough, they'll smush it on a nearby branch. They also love chokecherry. Chokecherry is a native shrub that grows wild in Montauk and would be a fine addition to any Hamptons yard. They're one of the shrubs Cornell identifies as most beneficial to birds.

I wasn't able to get out this weekend to look for scarlet tanagers. My family spent the long weekend in "Covid jail." With time on my hands and nowhere to go, I re-read "Leaves of Grass" by Walt Whitman. He writes a lot about the cycle of life -- death and rebirth. You could tell he was trying to spark some understanding of the interconnectedness of things. The grass pushing up from the ground was "the uncut hair of graves" and he wanted to "translate the hints about the dead young men and women, and the hints about the old men and mothers, and the offspring taken soon out of their laps."

Mr. Whitman wrote it in 1855, before the Civil War ultimately gave rise to the first Memorial Day, in 1868. He couldn't have foreseen all the wars that would follow, or that a huge mall, surrounded by acres of parking lots, would be named for him. He most definitely couldn't have seen that one day someone would take a gun, a tool of war, and enter an elementary school and murder 19 children and two adults with it.

As I read his poem from my house, listening to my drunk neighbors blaring '80s music and partying deep into the night, honoring the dead in their way, the scarlet tanager became something different in my head. It became the Memorial Day bird: blood-red and black.

I resolved to make it a new Memorial Day tradition, to find this bird nearby as it breeds and to spend some quiet time with it in the woods. Maybe you'll see it carrying food to some new life, high in a tree, away from all of our human problems. Maybe you won't see it at all.