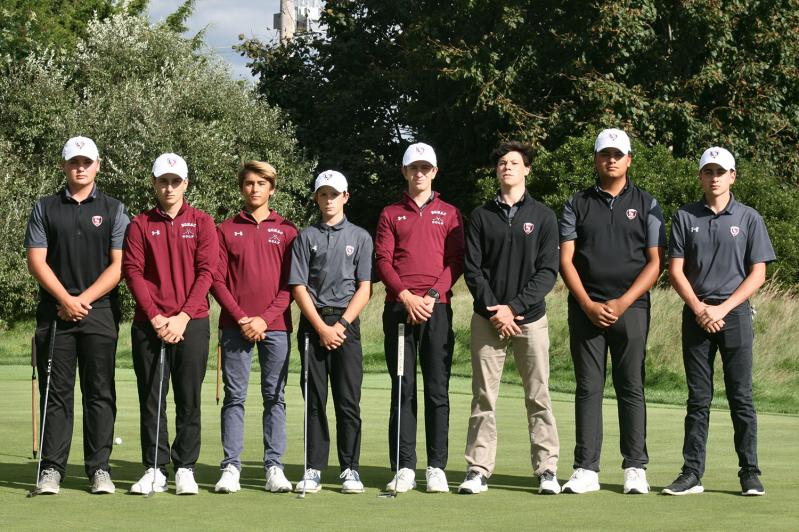 Nico Horan-Puglia, at three, led the way, with a 38, followed by Trevor Stacheki, at two, and J.P. Amaden, at four, each of whom carded a 41. James Bradley, the defending county individual champion, at one, shot a 43, and Juan Palacios, at five, and Carter Dickinson, at six, each shot 44.

It was the sixth straight win for Rich King’s young crew, whose aggregate score of 196 earlier in the week at the Westhampton Country Club impressed the Hurricanes’ coach. Bradley led the team at Westhampton, with a 1-over-par 36, followed by Palacios (37), Stachecki(39), Horan-Puglia (40), and Dickinson (44).

In addition, the team had recently carded a 190 at South Fork, the lowest aggregate score there that King could recall. Bradley, Horan-Puglia, and Palacios are sophomores, Stachecki and Amaden are juniors, and Dickinson is a freshman.

Turning to other sports, the girls swimming team, whose coach is Craig Brierley, improved its league record to 2-1 and its overall record to 3-2 by defeating West Islip 55-37 in an away meet on Sept. 29. East Hampton won every event but one in so doing.

From Soccer to Field Hockey

East Hampton’s boys soccer had mixed results last week. The soccer team defeated Kings Park 1-0 in overtime here last Thursday thanks to a corner kick by Randy Pizarro that sailed into the nets at the near post, but lost 2-1 at Harborfields on Sept. 28, a penalty kick having decided that one.

Eric Armijos, the East Hampton forward who customarily draws the most attention from opponents, did not play in the Kings Park game because he’d been red-carded at Harborfields.

Going into this week, Don McGovern, East Hampton’s coach, said his team was 4-3 in league play — 6-3 over all — and would need to win at least two of its remaining six games to make the playoffs. The league, he added, was “tight — everyone’s capable of beating anyone else on a given day.”

Dana Dragone’s field hockey team gave undefeated Miller Place all it could handle in a 2-1 overtime loss at Miller Place on Sept. 29.

The home team was treated to six straight corner plays in the second quarter, but could not put one by East Hampton’s eighth-grade goalie, Caeleigh Schuster.

Miller Place’s high-scorer, Emily Stoessel, who was to score both goals, broke through a number of defenders in the third period, her 12-yard knee-high shot treating the Panthers to the lead. But just before the final buzzer sounded, the Bonackers tied it at 1-1 thanks to a close-in goal by Delilah Desmond.

East Hampton had the first chance in the 7-on-7 overtime period, but couldn’t cash in. Miller Place came down and did.

The field hockey team locked horns with Comsewogue here on Friday, taking a 2-1 lead into the halftime break, but could not hold on, losing 3-2, again in overtime.

The girls tennis team, which defeated Sachem 5-2 Saturday, was 10-2 on Monday and will probably be third-seeded in the county team tournament