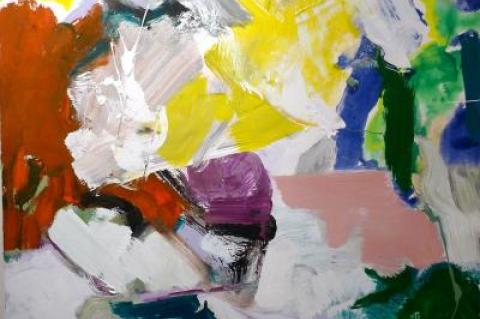 The snow may have called off last week's opening reception of the show "Dealer's Choice" at Kathryn Markel Gallery last weekend, but it didn't stop some, like April Gornik, from popping in on Jan. 4 to see what Arlene Bujese was up to in the space on Main Street in Bridgehampton.      Ms. Bujese said on Friday in the gallery that she met Ms. Markel at an opening last summer and she offered her the space during the month of January. 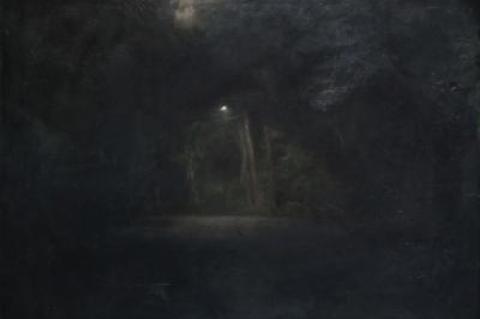 If you find yourself in Southampton for an errand or an escape, it would be worthwhile to duck into Tripoli Gallery on Jobs Lane for a mid-winter art break.     One of the few galleries west of here to be maintaining winter hours, it will keep its current show "The Worlds We Create," which opened on Thanksgiving, up through Martin Luther King Day.    The exhibition features Jonathan Beer, Melanie J. Moczarski, Aakash Nihalani, and Nick Weber in what are practically separate showings except for Mr. Beer and Mr. Nihalani. Ms. 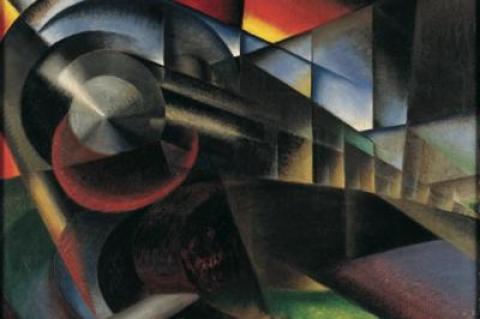 While a discussion in an East Hampton community newspaper blog of the relevance of an Italian movement from the early part of the 20th century that has little to do with New York, let alone the East End, may be off-topic, it is still one worth offering.     The Solomon R. Guggenheim Museum has given over its vast spiral to the fullest examination of Futurism ever presented outside of Italy. Opening on Feb. 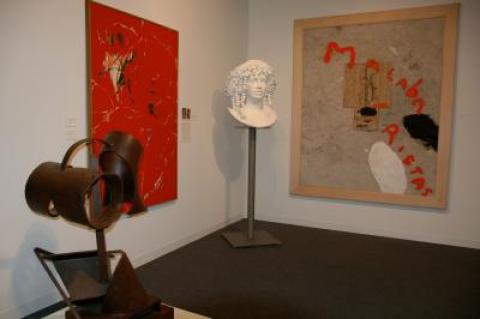 Armory Show Packs Them in on Saturday
By
Jennifer Landes

Despite a reported increase in "fair fatigue" among dealers and collectors and a warm sunny day outside, the Armory Show packed the piers on Saturday with long lines to get in and crowded aisles and booths all afternoon. 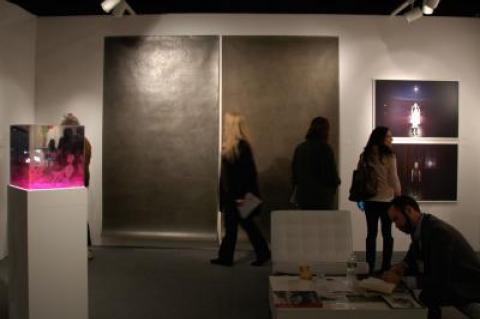 I had not planned on going to the Art Dealers Association of America show at the Park Avenue Armory so late. Initially, it was on my schedule for Thursday as my first drop in of the weekend, but I got in later than I thought, other plans arose, and the next thing I knew it was Sunday and it was quiet.      The crowd was older and looked serious, like they might be there to buy something at a fair's end price. Anyone younger was likely at the MoMA PS1 Spring Preview.  The walls and halls were painted dark with somber lighting. 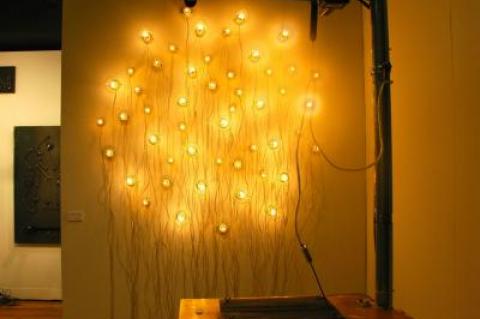 Seeming oddly out of the way in Soho, once the nexus of the contemporary art world, Volta NY offered a mostly focused presentation at its annual satellite fair during Armory art week in New York City.      It was also the only fair in the city this week that attracted South Fork dealers: Halsey Mckay Gallery from East Hampton and Sara Nightingale Gallery from Water Mill. The fair was invitational and restricted to solo shows.       The some 90 booths sprawled over two floors and were particularly cohesive on the first floor. 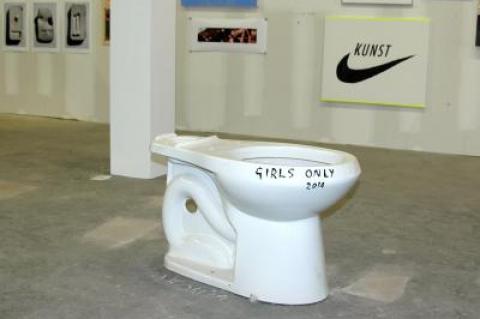 Brucennial: It's a Chick Thing and in its Final Year
By
Jennifer Landes

The Bruce High Quality Foundation's final Brucennial, a biannual event timed to the Whitney Museum of American Art's Biennial exhibition, is devoted only to women, this year in its final iteration.       Although there were rumors that some men submitted under female names, there was enough sheer quantity to earn the anonymous group a record for the largest female exhibition.      Representing the South Fork were artists such as Marilyn Church, who is known for her courtroom drawings, but is also an accomplished abstract painter, as well as Lola Montes Schabel and B 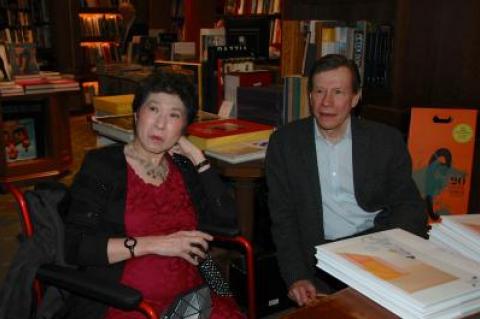 Li-lan, an artist who has had a studio in Springs since the 1970s, celebrated the publication of a monograph, "The Art of Li-lan: A World Achieved" with text by Carter Ratcliff, a poet and art critic for Art in America, on Thursday night at the Rizzoli book store on 57th Street in Manhattan. 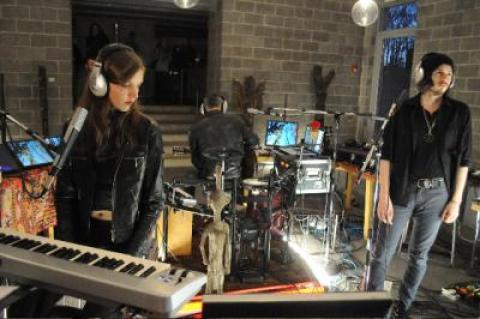 The Watermill Center was the scene of a durational performance by Temporary Distortion on Saturday afternoon and evening. The New York City based performance group is in residence at the center and working on a new piece, My Voice Has an Echo in It.”     Lasting six hours, the audience was invited to come in for parts of it or the entire piece. It was the first time the group had performed all six hours. They will tour France with the piece later this year. 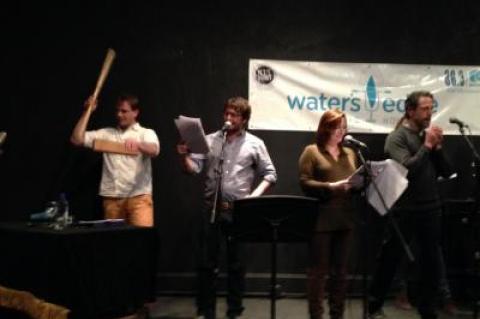 If it is the first Thursday of the month, it must be time for “The Water’s Edge Radio Hour,” which is broadcast on WPPB on that day at 7 p.m. The variety program was conceived through the Hamptons Independent Theater Festival by John Landes, Joshua Perl, and Peter Zablotsky.     This week’s episode, the sixth in the series, was taped on April 6 at the Bridgehampton Community House and has a spring theme, having fun with local concerns like potholes, the traffic uptick, and the new utility poles installed by PSEG. 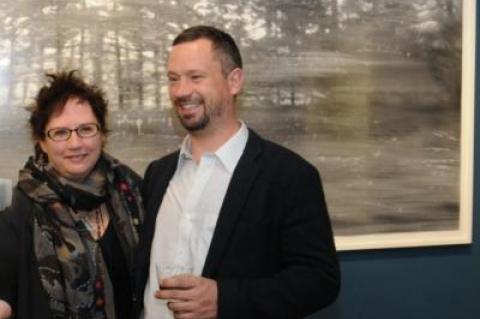 Elizabeth Dow, whose wall coverings and fabrics have been installed in the White House and in the private homes of Paul Simon, Harrison Ford, and Bill Gates to name a few, actually got her start as a painter and she continues in that medium to this day. Many of her recent works went on view at Vered Gallery in East Hampton on Saturday in a show called "Heaven" and will stay there until May 19.     With several of her wall paper designs now in the collection of the Smithsonian, it is not surprising that her preferred support for her oil paint is paper. 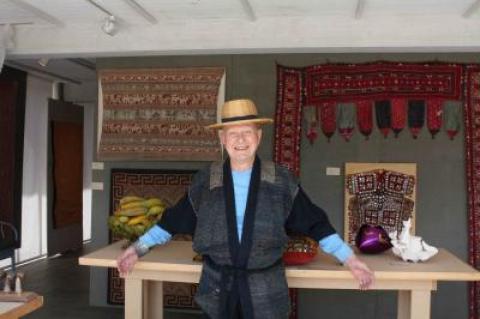 A New Season Sprouts at LongHouse

LongHouse Reserve offered a preview to both a sale of textiles from the collection of Jack Lenor Larsen and to what patrons will see on Saturday when the gardens open to the public for the season.     The textiles and objects for sale include Indian blouse fronts, a silk hanging for designed for the Sears Tower in Chicago, Pennsylvania German hooked rugs, and other woven pieces from Peru, Anatolia, and other locations in the Americas, Africa and Asia. There are some 200 objects in all. While the preview took place on Saturday with a talk by Mr.