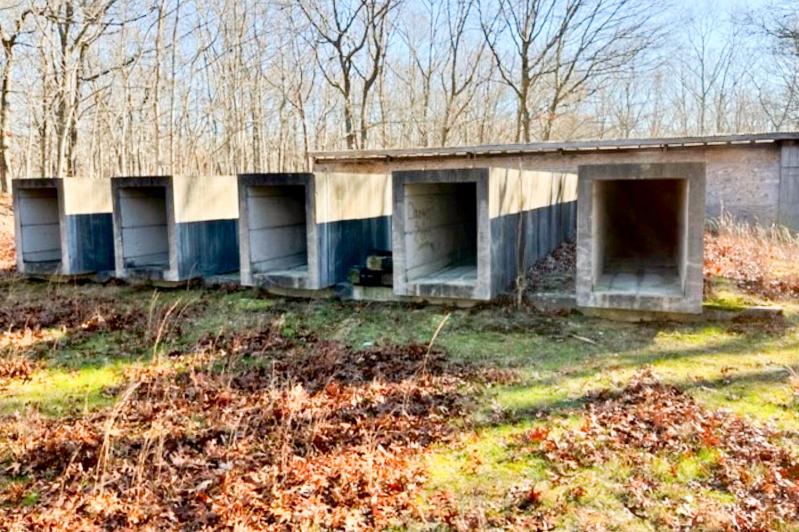 Concrete tubes are a distinguishing feature of the 200-yard rifle range at the Maidstone Gun Club. The club’s administration voluntarily closed it in August while police investigated an incident involving an errant bullet thought to have come from the range.
New York State Supreme Court File Image
By Christine Sampson

“Degraded, inadequate, and poorly maintained.” That’s how East Hampton Town Police detectives characterized the safety management systems at the Maidstone Gun Club’s 200-yard rifle range during an investigation into a bullet, allegedly originating from the club, that struck a Merchants Path house on Aug. 5, 2022.

The detectives’ report, which is dated Oct. 20, 2022, says that “there is a great probability that errant bullets left the facility” in a direction toward nearby houses. It stopped short of recommending any sort of criminal charges, as “the evidence obtained does not satisfy statutory requirements to support criminal acts and charges being brought,” and the case was closed.

The report was filed as evidence with Suffolk County Supreme Court on Friday as part of a lawsuit in November brought by several Wainscott residents against the gun club and East Hampton Town seeking the permanent closure of the club. The incident described in the detectives’ report was one of eight instances of bullets straying onto neighbors’ properties or striking their houses outright over the last several years.

The gun club voluntarily closed its rifle range on Aug. 5 as the police began their investigation, and on Dec. 2, New York State Supreme Court Justice Christopher Modelewski ordered the whole gun club temporarily shuttered — an injunction that the judge maintained around the turn of the new year when the gun club sought to lift it.

In completing the report, East Hampton Town Police Detective Luke McNamara compared backyard surveillance footage from 137 Merchants Path with closed-circuit footage from the Maidstone Gun Club’s rifle range. While the Maidstone’s recording system was technically 10 minutes off “real time,” the time stamps lined up to show two people using high-powered .30-caliber rifles — an AR-15 and AR-10, to be exact — at the rifle range at the time that the .30-caliber bullet struck the house. The house itself was just shy of a mile away from the rifle range, and Detective McNamara’s investigation concluded that that gauge of bullet “can skip and travel that distance, according to ballistics experts interviewed.” Also according to Detective McNamara’s report, there were “fresh/new” bullet holes in the barricade that indicated an upward trajectory, supporting the idea that bullets had escaped the rifle range.

With what the detective described as “the poor quality of the safety manage ment systems” of the rifle range, combined with the shooters’ apparent violation of Maidstone Gun Club membership rules for rifle-range usage, “it can be concluded that the systems in place are what have caused bullets to travel outside of range perimeters,” Detective McNamara stated in the report.

Joseph Maniscalco, the Nassau County attorney representing the club, declined to comment this week. However, in court filings, members and administrators of the gun club defended it and asserted that the bullets came not from the club, but from hunters in what they called the “forest area” between the club and closest houses.

“Beyond the gun club is a large area of county and town land which consists of a dense, old-growth forest over a mile wide,” wrote J. Mitchell Yates, the gun club director, who has been a member since 1980. “Anyone possessing a hunting license can access that forest area. . . . For a bullet from the rifle range to hit one of the plaintiffs’ homes it would have to exit one of the cement tubes, travel upward towards the sky over the 40-foot berm and then continue on that trajectory, and then pass through the dense forest area north of the gun club without impacting a tree, bark, or branch. The plaintiffs’ homes are over a mile from the shooting area of the rifle range.”

On Long Island, according to the State Department of Environmental Conservation website, hunting with shotguns or muzzle-loaders, which fire a single round at a time, is permitted, but it is illegal to hunt with rifles, which have a longer range than shotguns.

In a Dec. 30 court filing that attempted to get the injunction lifted, Mr. Maniscalco wrote that the plaintiffs’ pleadings “are based on speculation, conjecture, hyperbole, and press releases dating back 18 years ago. . . . The continuation of the injunction will only cause continued harm, prejudice, and damage to the defendant Gun Club without a shred of evidence to support such relief.”

This week, Mr. Maniscalco filed a new piece of evidence: a Nov. 24, 2022, police report in which one of the plaintiffs declined to be interviewed by police after reporting a gunshot in the vicinity of the club. The plaintiff, Ellen Corwin, “instead arbitrarily directed the police to the Gun Club, and she was notified by the police that the Gun Club was quiet and that no one was there.” The plaintiffs’ lawsuit was filed five days later, on Nov. 29.

The lawsuit came to light in December amid the gun club’s attempt to negotiate a new lease with East Hampton Town. Its current lease expires on Oct. 31 of this year. It has been a hotly contested issue that has divided the community, with many Wainscott residents coming out in favor of the club’s permanent closure and others defending it as an important community institution that provides needed opportunities for recreation and law-enforcement training. Opponents have also alleged the club violated terms of its lease with East Hampton Town. At present the gun club pays the town $100 per year for the lease of the 97-acre property.