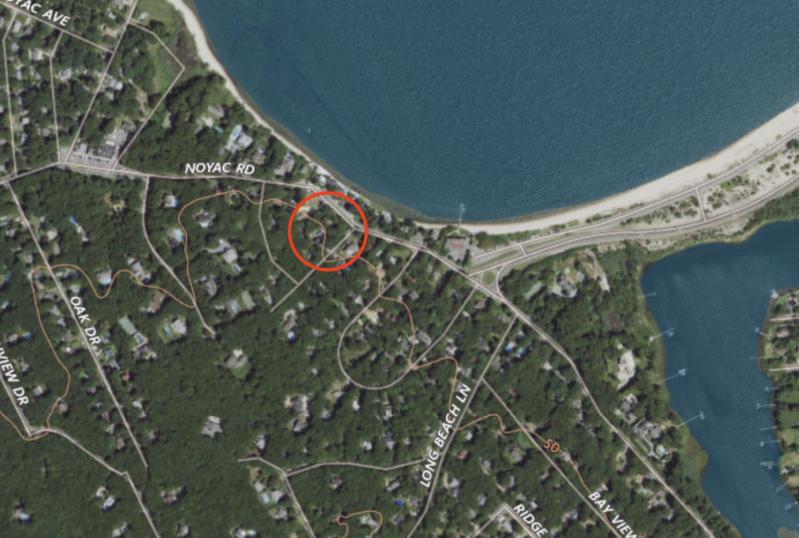 A family visiting from Maryland was asleep when the fire broke out at 3 Spring Lane in Noyac.
U.S.G.S.
By Christopher Gangemi Christine Sampson

Two sisters from Potomac, Md., visiting here with their family, died early Wednesday morning in a house fire on Spring Lane, off Noyac Road in Noyac.

Lt. Susan Ralph of the Southampton Town police said the other members of the family were able to escape from the rented house. The son leapt from a second-floor window, she said.

"The father awakened to the sound of glass breaking and alerted the family to get out. The father and wife escaped the home," Lieutenant Ralph said in a release. "When they realized the children hadn't exited the home, the father attempted to gain entry back in; however, the flames prevented him from gaining access."

Lewis Wiener, 60, Alisa Wiener, 52, and their son, Zachary Wiener, 23, had non-life-threatening injuries from smoke inhalation and were being treated at Stony Brook Southampton Hospital.

Firefighters from North Sea, Southampton, East Hampton, Bridgehampton, and Sag Harbor got the call just after 3:30 a.m. and found a house engulfed in flames. Firefighters located the two young women and rushed them by ambulance to the hospital. Medical personnel performed CPR, but the sisters had already succumbed to their injuries.

Southampton Town detectives, the town fire marshal's office, and the Suffolk County Arson Squad are attempting to determine the cause of the blaze.

The three-bedroom, two-bathroom house was last sold in 2016, according to Zillow. It is off a busy part of Noyac Road, between Cromer's Market and the turn for Long Beach. A large hedge blocks the view of the house from the road. Police tape remained strung across the bushes as of press time.

Mashashimuet Park's History and Future
A Conference for Young People to Create Solutions
Get Outside, Get Moving
END_OF_DOCUMENT_TOKEN_TO_BE_REPLACED