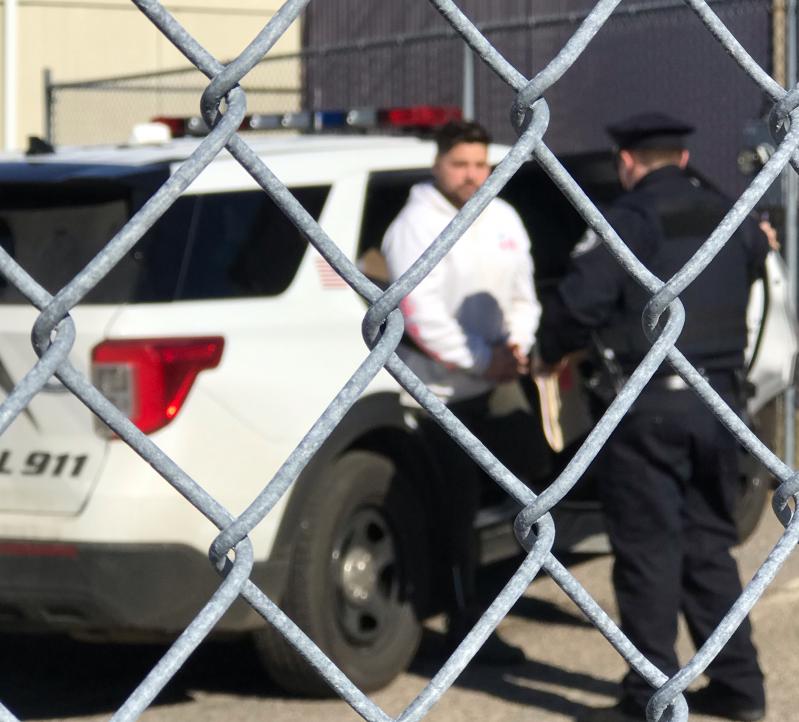 Update, Feb. 12, 11:30 a.m.: Marc T. Dern of Springs, who is accused of killing Kevin Somers of Amagansett on the night of Feb. 5, was arraigned in Southampton Justice Court on Friday. Justice Karen M. Sartain heard the case in the Hampton Bays court after East Hampton Town Justice Stephen Tekulsky recused himself.

Mr. Dern, 34, who worked under Mr. Somers, 45, at the Maidstone Club golf course, is charged with a single count of first-degree manslaughter, a felony. The complaint document from the court explained that "a person is guilty of manslaughter in the first degree when with intent to cause serious physical injury to another person, he causes the death of such person."

Kerriann Kelly, the prosecutor, who heads the Suffolk County district attorney's homicide bureau, asked that Mr. Dern be remanded or come up with $1 million cash bail or $3 million bond as an alternative.

The two men were at Mr. Dern's Lincoln Avenue house on the afternoon of the alleged crime, Ms. Kelly told the court, watching a golf tournament. Both were drinking. At 7:30 p.m. Mr. Dern's wife, who had to put their children to bed, said it was time for Mr. Somers to leave.

For reasons that are still not clear, the two men began a "pushing match." At some point, the prosecutor said, Mr. Dern punched Mr. Somers in the face, causing injury and copious bleeding. Although the victim was already badly injured, she said, Mr. Dern then put him in a chokehold, leading to his hyoid bone fracturing. In effect, his death was caused by suffocation.

Mr. Somers "went limp," Mr. Dern later told police, who were not called until 10:40. They found Mr. Somers on the porch, unresponsive, with no pulse. He was rushed to Stony Brook Southampton Hospital, where he was pronounced dead. Death was attributed to "neck compression."

It required "quite a degree of strength and force" to break the hyoid bone and cause suffocation, Ms. Kelly said. Mr. Dern himself, who could receive a maximum of 25 years in prison if found guilty as charged, was uninjured except for scratched-up knuckles. It is not certain what might have gone on in the three hours before police were called, but it is known that Mr. Dern told his wife to unplug their home security cameras.

It was then the turn of John Ray, representing the defendant, who entered a plea of not guilty on his behalf. Mr. Ray argued that there was "no evidence" of the claim that the altercation began at 7:30 p.m., or that Mr. Somers was asked to leave at that time.

An E.M.T. who arrived after the 10:40 phone call told police that the victim's skin "was warm to the touch," said Mr. Ray, who argued that if someone had been lying on a porch in the cold for three hours, "common sense" said his skin would not still be warm. That detail contradicted the prosecution's portrayal of Mr. Dern as an "evil" person who waited three hours to call for help, Mr. Ray argued. We have an altercation, he told the judge. It's unclear if self-defense is part of the fight.

He went on to paint a picture of Mr. Dern as a young man with a family, two young children, living in a house acquired from his mother after her death. The two men, said the lawyer, were "best friends" who worked together at the Maidstone, Mr. Dern as caddy master and Mr. Somers as his boss. Mr. Dern, he said, had no prior brush with the law.

Even if there were "a wrestling match," Mr. Ray said, there is "no evidence whatsoever that this was done intentionally." Ms. Kelly had told the court that it takes great force to break the hyoid bone, but Mr. Ray disputed that. "They can be very delicate," he said, noting that he'd had experience with such cases in the past. If you press on it in just the wrong way, it will break.

He cast the episode as "a mistake" and a "calamitous situation," blaming it on drinking. Mr. Dern, he said, is not a criminal who needs to be in jail, he is a father who needs to be home with his children. Justice Sartain turned to the matter of bail.

Back in law school, she said, "We learn, 'Rooftop, rooftop, rooftop,' " which, she explained, stands for "Risk of Flight to Avoid Prosecution." Mr. Ray argued that Mr. Dern had hired him on Feb. 6, the day after the altercation, and had not fled in the days following. He followed police orders, said the lawyer, and "took the chance" of staying home with his family, knowing that police would be coming for him. At that point, Mr. Dern's wife shoulder's began to shake as she began to cry. Mr. Dern's children "saw Daddy taken away," said Mr. Ray.

He concluded by requesting bail be set at $50,000 cash. "I don't think remand is appropriate, and a $1 million cash bail," which Ms. Kelly originally requested, "is the same as remand," Mr. Ray said. His client is not a flight risk, he said, adding that he spent a "good amount of money" to retain his services and that he didn't think he'd waste that money.

Ms. Kelly asked to speak again. At some point in the evening — it was not clear when — an Uber had been called to pick up Mr. Somers, she told the court, but it had been canceled. Mr. Dern, however — as she pointed forcefully across the aisle at the defendant — was picked up by another Uber, and dropped off down the road near a wooded area with a bag.

Justice Sartain set cash bail of $500,000 or $1,000,000 secured bond. Mr. Dern was sent to county jail in lieu of bail; if a grand jury fails to indict him on the manslaughter charge by Feb. 16, he will be released according to state law. He is scheduled to appear in East Hampton Justice Court on Feb. 16, before Justice Lisa R. Rana.

Update, Feb. 11, 5 p.m.: Marc T. Dern, the Springs man charged with manslaughter following a fight that led to the death of his friend Kevin Somers of Amagansett, has been ordered held on $500,000 cash bail or $1 million secured bond. He was arraigned Friday by Southampton Town Justice Karen Sartain after East Hampton Town Justice Steven Tekulsky recused himself from the case.

Kerriann Kelly, chief of the Suffolk County district attorney's homicide bureau, requested that bail be set at $1 million. Mr. Dern's attorney, John Ray, entered a plea of not guilty and asked for bail to be set instead at $50,000 because his client had no criminal record prior to his arrest on Thursday, and because he has two children to care for.

According to Ms. Kelly, the two friends had been drinking alcohol and watching a golf tournament on TV before their altercation, though what sparked the fight remains unclear. Mr. Somers's death has been attributed to "neck compression," stemming from a broken hyoid bone that Ms. Kelly said effectively suffocated him.

A grand jury indictment is expected to be unsealed next week.

Mr. Dern, who lives in the Lincoln Avenue house where police said the two men fought on Saturday night, was held overnight at East Hampton Town police headquarters. He was scheduled to be arraigned Friday morning in town justice court on the charge, which is a felony.

According to state penal law, the charge of first-degree manslaughter alleges a defendant's intention to "cause serious physical injury to another person," resulting in death of that person or another, by actions "under circumstances which do not constitute murder because he acts under the influence of extreme emotional disturbance."

Town police called in Suffolk County's homicide squad to investigate the death of Mr. Somers, 45, who lived in Amagansett. After the two men reportedly fought, Mr. Somers was taken to Stony Brook Southampton Hospital, where he was pronounced dead. The Suffolk County Medical Examiner performed an autopsy; police have not yet stated Mr. Somers's exact cause of death.

Services for Mr. Somers are to be held this weekend.

A Conference for Young People to Create Solutions
Get Outside, Get Moving
Two Traditions, One Fair in Springs
END_OF_DOCUMENT_TOKEN_TO_BE_REPLACED