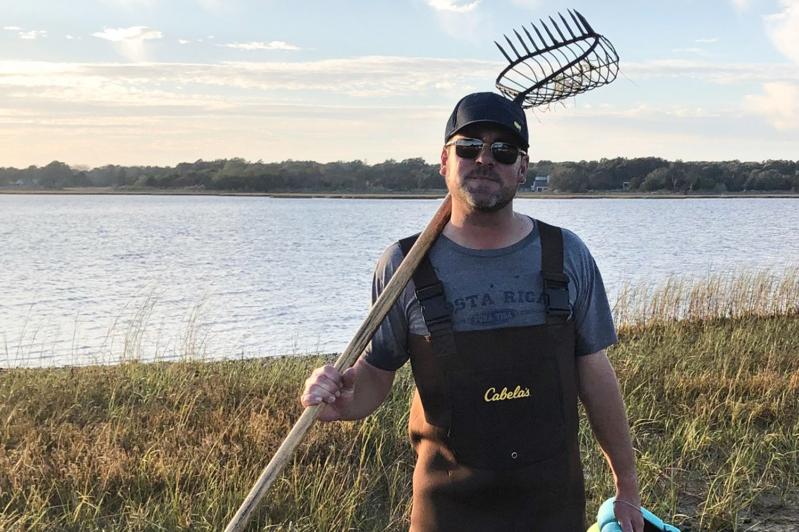 “He was our brother, our best friend, and everything we know and love about East Hampton and being a Bonacker,” friends of Kevin Somers wrote this week as they absorbed the shock of his death.
Somers Family
By Christine Sampson

Kevin Somers was a natural athlete with a memorable laugh — the kind of person who greeted everyone with a smile and who made people around him feel comfortable, friends recalled this week as detectives from Suffolk County’s homicide squad investigated his death.

According to the county police, Mr. Somers, 45, was taken to Stony Brook Southampton Hospital after an altercation with Marc Dern, 34, at approximately 10:40 p.m. on Saturday at the Lincoln Avenue house where Mr. Dern lives. Mr. Somers was pronounced dead at the hospital; an autopsy was to be performed by the Suffolk County medical examiner.

Police have not yet filed charges against anyone.

Detective Sgt. Daniel Toia of the East Hampton Town Police said Tuesday that his agency “always coordinates with the Suffolk County Police Department homicide section if we suspect a homicide or something suspicious.” He referred all other questions to the county police, who had no additional information to release as of press time yesterday.

If Mr. Somers’s death is ruled a homicide, it would be the second in East Hampton Town in less than three years. In June of 2019, a Montauk man was found dead on a trail in Kirk Park by a couple out for a morning walk. Before that, East Hampton Town had not seen a homicide case in a decade.

Mr. Somers, a lifelong resident of East Hampton Town, was the caddy master at the Maidstone Club, where he was well liked by members and staff. He was a “level-headed guy who knew exactly how to take care of the people he was engaged to be responsible for, the caddies and the members,” Joseph Kazickas, a member, wrote on Facebook. “He balanced these responsibilities with sensitivity and personal engagement, and I know that everyone who knew Kevin will miss him.”

Mr. Somers lived in Amagansett. He was the father of a teenage daughter, a partner, and a friend to many.

Friends expressed shock and disbelief as they processed the news of his death this week. “He was our brother, our best friend, and everything we know and love about East Hampton and being a Bonacker,” wrote Matt Fromm, Ross Gload, Jake Katz, and Henry Meyer, who had been friends with Mr. Somers since kindergarten at the Springs School. “He was the ultimate teammate and competitor who brought out the best in all of us. He challenged us all to be better than we were and showed us how to win as a team and created a bond in us that will stand the test of time. He will be missed more than words could ever explain. He will be in our hearts and minds forever.”

“As young energetic boys, the bond started through sports, whether it be intramural sports during school recess, whiffle ball in the streets after school, or riding our bikes to the fields behind Springs School to play home-run derby followed by treats at Barnes General Store,” Mr. Fromm wrote. Their friendship evolved through “the trials and tribulations of college years, finding jobs, losing loved ones, finding loved ones, having children. . . .”

His family declined to comment this week as police continued their investigation.

Mr. Somers attended the Springs School and graduated in 1994 from East Hampton High School, where he excelled at golf, basketball, and baseball.

Jim Nicoletti, his baseball coach, recalled the varsity “dream team” of which Mr. Somers was an integral part throughout his high school career. He was a decorated player who helped the team win multiple county and Long Island championships and go all the way to the New York State semifinals one year. He later got a scholarship offer from Belmont Abbey College in North Carolina, Mr. Nicoletti said.

“Kevin was always respectful, the hardest worker, always there. He never had a bad word about anybody — opponent, umpire, teammate — he got along with everybody,” Mr. Nicoletti said. He plans to make a case that Mr. Somers belongs in the school’s Hall of Fame.

He was an “old school friend,” George Wilson of East Hampton wrote on Facebook. He was “someone who makes you feel comfortable and reminds you of the small town you grew up in.”

Claude Beudert, who coached Mr. Somers on the golf team at East Hampton, recalled that he was a competitive athlete who won a county golf tournament his senior year. Like so many in the community, Mr. Beudert said he was shocked and saddened to hear of Mr. Somers’s death this week.

“He was pretty laid back, probably a little too much sometimes, but he always came through. He was a leader, no doubt about it,” Mr. Beudert said. “He was a huge Mets fan. I’ll miss talking to him about that.”

“Kevin . . . could engage with anyone in healthy banter about anything sports related, whether it be his beloved Mets or Freddie Couples nowadays on the Senior Tour,” Mr. Fromm wrote. “He could tell you details of every World Series game of the ‘86 Amazing Mets like it was yesterday.”

Before working at the Maidstone Club, Mr. Somers worked and often played at the South Fork Country Club, which is where Larry Cantwell met him about 20 years ago.

“He was friendly with everyone. Everyone liked him because he always greeted you with a smile,” Mr. Cantwell said. “Everyone who has been associated with Kevin over his lifetime is deeply saddened by this tragedy.”

Mr. Somers and Mr. Dern have been described as friends. Efforts to reach Mr. Dern this week were unsuccessful.

Mr. Somers’s family has set up a scholarship fund in his name. Checks made out to the Kevin Somers Scholarship Fund can be mailed to P.O. Box 1023, Amagansett 11930. A GoFundMe page has been set up for online donations.

Services will be held this weekend.

This story has been updated to correct Marc Dern's age, which was incorrect in the county police's original statement.

Mashashimuet Park's History and Future
A Conference for Young People to Create Solutions
Get Outside, Get Moving
END_OF_DOCUMENT_TOKEN_TO_BE_REPLACED