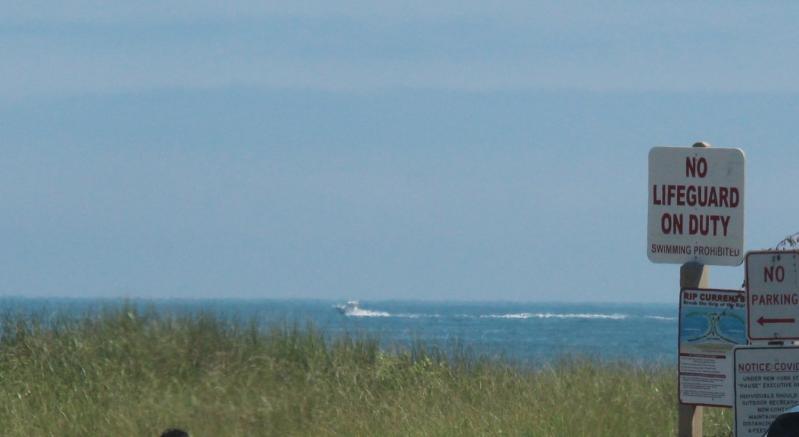 A fellow beachgoer at Egypt Beach in East Hampton Village became concerned earlier this week upon noticing that a swimmer had been gone for more than 45 minutes.
Durell Godfrey
By Bella Lewis

There was cause for concern on Egypt Beach near the Maidstone Club on Monday afternoon when a beachgoer realized that a swimmer had been gone for more than 45 minutes and was no longer in sight. As it turned out, the man was not in distress but an experienced ocean swimmer who goes in almost every day. Still, what followed put recent interagency training to the test and, said Drew Smith, Chief of East Hampton Village lifeguards, was "a huge success."

In the wake of a training session held in June, Mr. Smith said, different departments came together on Monday to create a seamless response. First, he called his "rescue swimmer" to pass on information the caller had given about the man, who is in his 60s; then he alerted guards from Two Mile Hollow Beach to the east. When they reported seeing someone swimming far out from shore, the chief directed his swimmer to go out 150 yards and, as lifeguards say, "have a conversation" with the person to see if he was the missing man.

That swimmer might not have been the one they were concerned about, the chief explained; that person might still be out there somewhere, in distress. They could not be certain. East Hampton Village police were notified, and flew a drone over the rescue swimmer and the object of his search in order to give "a better visual" to Marine Patrol, which was keeping the responding lifeguards informed over radio.

A Jet Ski operator was also deployed, and he confirmed that the man in the water had said he'd indeed gone in at Egypt Beach. To be certain they had the right person, though, they asked another question: "What color is your beach towel?"

The answer to that one settled the matter.