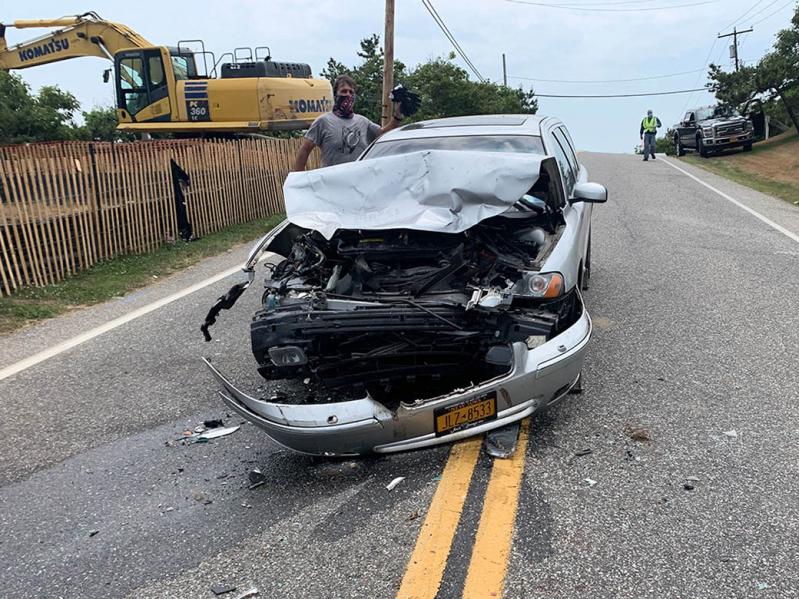 Five people were taken to the hospital, one of them with a concussion, after a Volvo driven by Noble Stewart of East Hampton rear-ended a Jeep on Old Montauk Highway on Friday afternoon.
Doug Kuntz
By Bella Lewis

A serious accident on Old Montauk Highway in Montauk, in which five people were taken to the hospital, was the price of a teenage driver’s idea of “fun,” East Hampton Town police reported this week.

On Sunday afternoon of the holiday weekend, Noble Stewart of East Hampton, 18, was driving a 2006 Volvo on the winding road, where the speed limit is 30 miles per hour, at what he later estimated at about 50 m.p.h. “It is fun to go over the hills” in that manner, police quoted him as saying.

He was unable to stop in time to avoid rear-ending a 2009 Jeep driven by Jack Dirico, 34, of Montauk, who had just come over a crest near Fir Lane when he saw a stopped 2007 Mack truck in the road and slowed down.

Devon Mansir of East Hampton was waiting in the truck, owned by the Ronald Webb Builder company, to back into a nearby driveway. He had his hazards on and was parked just over the crest, which, police noted, had no road hazard safety triangle or flagger.

Both Mr. Dirico and Mr. Mansir reported that Mr. Stewart’s high rate of speed caused the crash. Mr. Dirico’s Jeep was almost totaled. Mr. Stewart’s Volvo sustained front-end damageâ and both vehicles were towed by Marshall & Sons. The back fender of the big truck also had damage, to its back fender.

A Montauk fire company ambulance took Mr. Dirico, with fractures of facial bones, to Stony Brook Southampton Hospital, along with his passenger, Erica Finkelstein, 32, who complained of neck pain. Mr. Stewart complained of pain in his arms. One of his two passengers, Margaret O’Connor, 18, told police she had pain all over her body, and the other, Ethan Esposito, 16, was said to have suffered a concussion. Those three were taken to the hospital by Amagansett ambulance. All five have since been released.

On Friday afternoon, a 12-year-old bicyclist, Marco Guazhambo of East Hampton, was turning left on Harbor View Drive and Delavan Street in Springs just as M.G. Castanolopez of East Hampton, 41, was slowing his Hino truck for a stop sign. With only one hand on the handlebars, the boy was unable to brake in time as he entered the same lane. The truck grazed him, and he fell off the bike, sustaining minor bruises to both knees. After complaining of pain in his stomach, he was taken by Springs ambulance to the hospital, which released him after treatment.