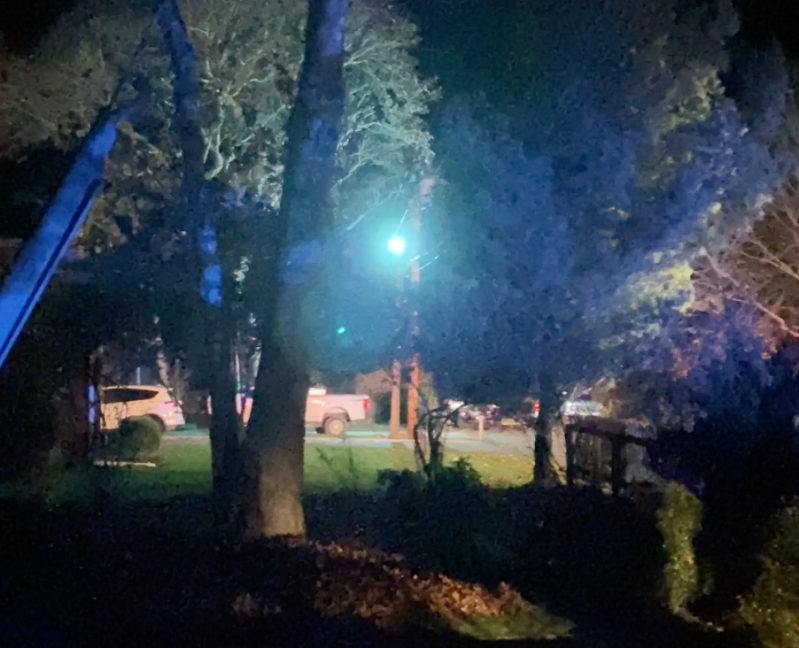 A sparking power line on Sunday night was captured on camera.
Annelise Mendelman
By Bella Lewis

A Sunday evening windstorm prompted tornado warnings to interrupt television programming in the area -- and caused some damage in parts of Long Island, including Springs.

The National Weather Service's Islip Climate Summary for Nov. 15 recorded the wind speed at 43 miles per hour and the strongest gusts at 54 m.p.h. By comparison, Tropical Storm Isaias in August sent winds sustained at up to 55 miles per hour across Long Island, with gusts exceeding 60 in some places.

Sunday's winds made for a particularly dramatic scene on Gann Road in Springs. Annelise Mendelman, 19, was spending the evening at her cousin's house when she heard a prolonged popping noise around 7:30 from a few houses down the block. Realizing it was not likely to be fireworks, she stepped outside and called police when she saw a live power line. The line flashed glowing white light, illuminating the entire street and sending orange sparks to the ground, she said.

Heavy winds were blowing leaves around the wire when a Marine Patrol officer located at the end of Gann Road arrived first to the scene. Police cars and fire department trucks arrived soon after, and officers closed the street, Ms. Mendelman said.

She reported that firemen got out of their trucks and put on uniforms, but the cluster of first responders appeared to be waiting for P.S.E.G. to shut off the power first.

When Ms. Mendelman and her cousins moved off the road to stand in their next-door neighbor's driveway, part of the wire on a telephone pole right above them exploded with a loud pop "like a bomb." Later, when a P.S.E.G. worker went up in a crane, Ms. Mendelman saw it explode again, she said.

Elizabeth Flagler, head of internal and external communications at P.S.E.G. Long Island, said that "a tree made contact with a wire that led to a transformer fire. A serviceman responded to the location and found a wire burning. He cleared the tree and reinstalled the fuse to test the transformer, which blew, causing the loud popping noise customers may have heard. A specialized crew was called in to replace the transformer and the wire. This outage affected nine customers for approximately two and a half hours."

Detective Sgt. Daniel Toia of the East Hampton Town police confirmed there was an ongoing fire chief investigation on Monday morning on Gann Road. "We had several calls last night due to weather conditions of wind and rain, downed trees and downed wires." There were no injuries, he said.

Among the calls in Springs, he noted that a wire burning outside 41 Shoridge Road had been making loud bangs and sparking, but by the time police arrived there was no fire or noticeable damage. The caller had already notified P.S.E.G., and the company turned off power at the house. A downed wire at 75 Church Lane was also removed by P.S.E.G. that night, Detective Toia said.

Trees, Wreaths for Sale in Amagansett
Holiday Cheer Is Coming to Sag Harbor
Even More Thanksgiving Options From the Pike and Old Stove
END_OF_DOCUMENT_TOKEN_TO_BE_REPLACED