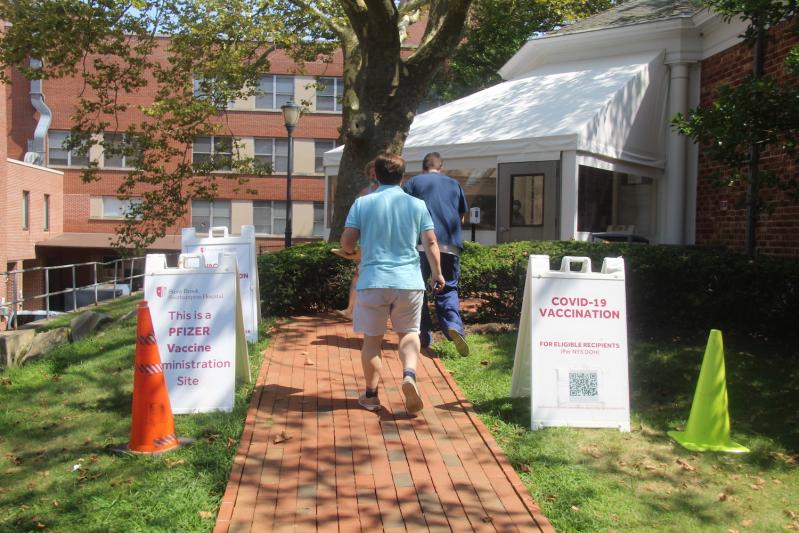 On the East End, you can get third doses of the Moderna or Pfizer vaccines at many of the chain pharmacies like CVS or at Stony Brook Southampton Hospital on certain days of the week.
Durell Godfrey
By Joshua Potter, D.O.

The big question on everyone's lips this month seems to be whether or not they should receive a third (in the case of the Pfizer or Moderna mRNA vaccines) or second (if they opted for the Johnson and Johnson vaccine) "booster" dose against Covid-19. Final answers are still outstanding in several key areas, but some firm recommendations can be made.

First, anyone who received either the Moderna or Pfizer two-dose vaccine series and is moderately to severely immunocompromised should go ahead and get a third dose at least 28 days after getting their second one. This recommendation was made based on data submitted to the Centers for Disease Control and reviewed in July 2021 that showed immunocompro-mised people were more likely to get severely ill and transmit the virus and that, notably, some studies showed that around 44 percent of hospitalized, breakthrough cases were made up of immunocompromised patients. Moreover, effectiveness in immunocompromised people seven to 27 days after their second dose of the Pfizer vaccine was 71 percent compared to 90 percent over all (when measuring any infection), and the antibody response was significantly lower among patients who had active cancer, were on hemodialysis, had received an organ transplant, and/or were on immunosuppressive therapy when compared to "healthy" controls.

According to the C.D.C., moderate to severe immunocompromise generally refers to anyone who has: received active treatment for tumors or blood cancers; received an organ transplant and remains on immune-suppressing medications; received a stem cell transplant within the last two years; been diagnosed with moderate or severe primary immunode-ficiency; untreated or advanced H.I.V./AIDS, and/or is on active, especially long-term treatment with corticosteroids like prednisone or other drugs that might suppress the immune response (such as some of those given to patients with lupus, rheumatoid arthritis, or other autoimmune diseases). In addition, patients with significant chronic kidney disease, such as those who are on hemodialysis, probably qualify as well.

If you fit into these categories, getting a third dose is almost certainly a good idea. When people who were immunocompromised were given a third dose of the mRNA vaccines, 33 to 50 percent of patients who had shown no detectable antibody response after their initial vaccine series were able to mount an antibody response, showing that a third dose does help these people mount an appropriate, helpful response. In addition, the evidence submitted to the C.D.C. showed that when three doses of mRNA vaccines were given to these kinds of patients, no serious or critical side effects requiring hospitalization were noted, and symptoms continued to be mostly mild to moderate, although these studies were small in terms of numbers.

On the East End, you can get third doses of the Moderna or Pfizer vaccines at many of the chain pharmacies like CVS or at Stony Brook Southampton Hospital on certain days of the week. If at all possible, you should try to match your third dose to the first vaccine series you were given and not mix and match series.

Unfortunately, there has not been a firm recommendation yet regarding a subsequent dose for immunocompromised people who received the Johnson and Johnson vaccine, although studies are ongoing, and the expectation is that there will be information about this soon.

Along those same lines, the expectation is that at some point this week, the federal Food and Drug Administration and C.D.C. will likely recommend that people over 65 who had received the Pfizer vaccine should receive a third dose as well, as there does appear to be some degree of waning of the antibody response in this patient population, although precisely to what degree and how significantly is an ongoing discussion (data is still pending submission for Moderna and Johnson and Johnson).

This assumption is based on the fact that on Friday, an advisory panel to the F.D.A. voted to recommend that high-risk individuals such as those over 65 and possibly frontline and health care workers should also receive this third dose. As many have noted, the F.D.A. does not have to accept those recommendations, but it does usually follow the panel's advice. I hope that by the time this article goes to print, we will have updated recommendations in this regard, and in the coming weeks, guidance for those who received the Moderna and Johnson and Johnson vaccines as well.