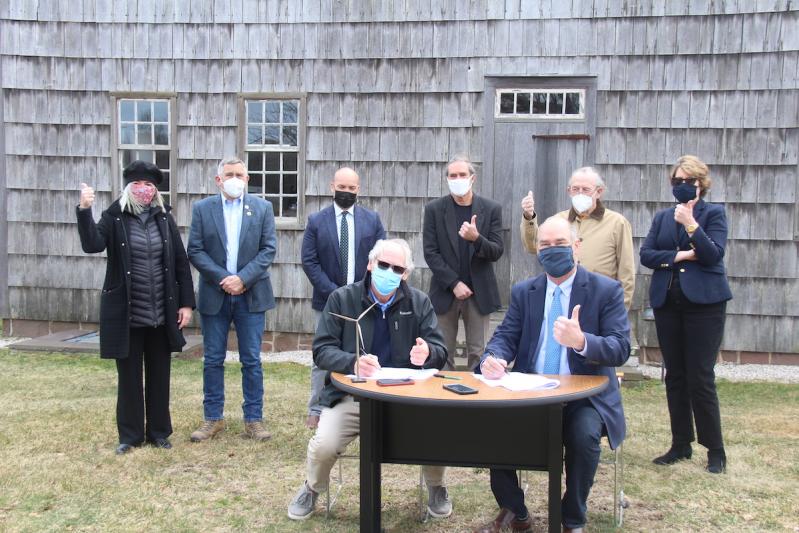 East Hampton Town Supervisor Peter Van Scoyoc and members of the town board and town trustees signed a host community agreement with the developers of the South Fork Wind farm outside Town Hall on March 24.
Durell Godfrey
By Christopher Walsh

In a major step forward for the proposed South Fork Wind farm, the New York State Public Service Commission voted unanimously last Thursday to issue a conditional certificate of environmental compatibility and public need, a requirement in order for the project to move ahead.

The developers, Orsted U.S. Offshore Wind and Eversource Energy, plan to land the cable on the ocean beach off Beach Lane in Wainscott, which has sparked furious opposition from a well-funded group called Citizens for the Preservation of Wainscott. The group is seeking to incorporate the hamlet of Wainscott as a self-governing village to thwart that landing location.

"In this proceeding, the parties that opposed the proposal argued that the project is not needed or that it does not appropriately avoid or minimize environmental impacts, including impacts to commercial fishers," Administrative Law Judge Anthony Belsito told the P.S.C. "However . . . the record fully supports a finding that the facility is necessary to transmit electricity from the proposed offshore South Fork Wind farm generation facility to the point of interconnection at the East Hampton substation to meet the needs identified by the Long Island Power Authority in its 2015 request for proposals regarding the energy needs of the South Fork of Long Island."

The project will help LIPA and the state achieve their renewable energy goals, Judge Belsito continued. "Further, the record clearly supports the required findings including that the facility avoids or minimizes any significant adverse impact to the environment and active farming operations to the extent practicable and that the facility conforms to a long-range plan for expansion of the electric power grid of the state."

The go-ahead certificate itemizes 195 conditions covering categories including public health and safety, noise modeling and monitoring, a fisheries compensation plan, and minimum cable-burial depth, including a 30-foot minimum below the surface of Wainscott Beach.

Conditions also limit construction to off-peak seasons, and require that access to the beach along Beach Lane be maintained, except for a few hours on a single day if necessary to deliver a sea-to-shore transmission vault.

"Various alternatives were raised during the proceeding," Judge Belsito said. "Based on the record, the proposed alternatives are either likely not viable due to the inability to obtain necessary property rights or will increase overall impacts relative to the project as proposed in the joint proposal." Citizens for the Preservation of Wainscott had proposed that the cable be landed instead at Atlantic Avenue Beach in Amagansett or at state-owned land at Hither Hills in Montauk.

John B. Howard, the commission's interim chairman, referred to "New York's bold initiative to decarbonize its electric grid through the development of offshore wind. . . . While we have years ahead of us, today's approval of Deepwater Wind South Fork's Article VII application moves New York closer to its goal. . . . In the coming months and years, more cases like this will come before this commission, and I trust they too will see the same level of oversight that this case has received."

Reaction was swift. Citizens for the Preservation of Wainscott issued a statement expressing disappointment in the decision, "but the East Hampton Town Board's abandonment of the people of Wainscott made this phase a challenging process."

"While other municipalities push developers to find nonresidential landing sites, our town supervisor led his board -- without advice from independent experts -- to insist that the landing site be located in Wainscott when better alternatives existed, including Hither Hills State Park."

The group indicated that it will pursue the lawsuit it filed last month against the town board, Supervisor Peter Van Scoyoc, and South Fork Wind. "Given that to date this route-selection process has been tainted and highly politicized by the positioning of the East Hampton Town Board, Citizens for the Preservation of Wainscott has been left with no recourse other than to seek further administrative redress and then, if necessary, seeking redress by the courts," its statement said.

But Meaghan Wims, a spokeswoman for the developers, said that the P.S.C.'s approval "affirms that South Fork Wind can be built with minimal impact to the environment and the community, while at the same time helping the Town of East Hampton and New York State reach their clean-energy goals. We thank the P.S.C. and its staff for its diligent review over a more than two-year period that included extensive analysis from experts across multiple state agencies and considerable input from the East Hampton community."

Judith Hope, a former town supervisor and president of Win With Wind, a group formed to support the wind farm, also issued a statement. "Win With Wind has worked hard for this, and we are grateful for the help of our supporters and especially the law firm Arnold & Porter and the Sabin Center for Climate Change Law at Columbia University," she said. "We are lucky to live in a town with such forward-looking political leadership."

"Now it is time for all of us to come together and support [South Fork Wind]," added Jeremiah Mulligan of Win With Wind. "Instead of worrying about the inconvenience of a cable being buried under the roads of Wainscott, let us focus on saving our seriously battered planet."

The town and town trustees approved easements and a lease allowing the project to proceed in January. It remains under federal Bureau of Ocean Energy Management review. The developers, Ms. Wims said, expect the project to be fully permitted by January 2022, with construction activities commencing soon thereafter and the wind farm operational by the end of 2023.

The developers submitted their application to the P.S.C. in September 2018. The P.S.C. determined that it was complete in March 2019, and a public hearing in East Hampton in June of that year drew around 80 speakers and the submission of almost 3,000 written comments. The applicants then filed a joint proposal that was co-signed by the State Department of Public Works, the State Department of Environmental Conservation, the State Office of Parks, Recreation, and Historic Preservation, the State Department of State and Department of Transportation, the East Hampton Town Trustees, PSEG Long Island, Concerned Citizens of Montauk, the Group for the East End, Montauk United, Win With Wind, and three individuals. It was opposed by Citizens for the Preservation of Wainscott, the Long Island Commercial Fishing Association, and a few individuals.

Note: This article has been updated since it originally appeared online.