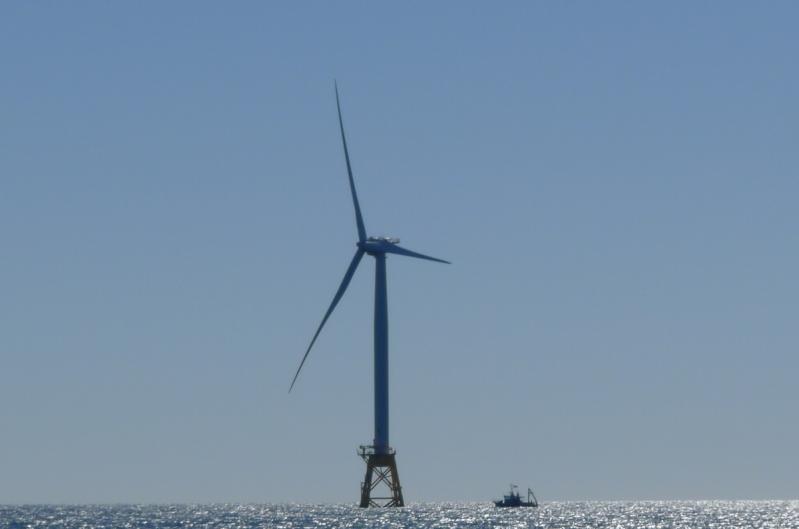 A wind turbine off Block Island. The South Fork Wind farm will include up to 15 turbines in a federal lease area 35 miles off Montauk Point.
Christopher Walsh
By Christopher Walsh

Over the objections of one member and after a contentious discussion, the East Hampton Town Board voted on Thursday to execute an easement and host-community agreement with the developers of the proposed South Fork Wind farm.

Thursday’s vote followed several years of discussion, debate, and public comment on the proposal that would see an installation of up to 15 turbines in a federal lease area approximately 35 miles off Montauk Point. The offshore installation remains the subject of furious opposition, most visibly manifest in an effort to create an incorporated village of Wainscott, where the wind farm’s export cable would make landfall at the ocean beach at the end of Beach Lane.

Four of the board’s five members voted in favor of a resolution authorizing Supervisor Peter Van Scoyoc to execute the easement agreement with South Fork Wind, L.L.C., for the construction, installation, maintenance, repair, replacement, removal, and decommissioning of the wind farm’s export cable and related facilities for the wind farm, within town road rights-of-way, to connect the wind farm to a Long Island Power Authority substation off Cove Hollow Road in East Hampton. The resolution is subject to permissive referendum, meaning if enough signatures were collected opponents could force a public vote on the project.

The board also voted 4 to 0 to execute the host-community agreement that would see the developers, Orsted U.S. Offshore Wind and Eversource Energy, making direct payments to the town totaling almost $29 million over the installation’s 25-year lifetime.

Councilman Jeff Bragman abstained from voting on both resolutions, repeating his assertions that the town would maintain leverage and therefore its ability to influence the project by waiting until state and federal reviews are complete, and that many pertinent questions as to environmental review and the installation’s potential impact on the commercial fishing industry remain unanswered.

The board, he said, should wait until the New York State Public Service Commission and federal Bureau of Ocean Energy Management have completed their review. The public service commission, which must issue a Certificate of Environmental Compatibility and Public Need in order for the project to proceed, is expected to announce a decision in the first quarter of this year.

“I cannot join in voting for the resolution on the grounds I’ve stated previously,” Mr. Bragman said with respect to the easement resolution. “I think our action should await conclusion of the Public Service Commission’s findings. I think it’s clear that waiting to execute the easement will not in any way delay or hamper the review.” The time the board has taken to get to this point, he said, “has helped us better understand the project, and that will continue, but the appropriate time to vote and convey the easement is after final decision” by the public service commission.

Councilwomen Kathee Burke-Gonzalez and Sylvia Overby issued statements in support of the project, citing climate change and the urgency for action that it demands. Councilman David Lys, who voted against a nonbinding memorializing resolution supporting the project in 2018, said that research he has conducted in the ensuing years, and information that has emerged in the P.S.C.’s deliberations, had resolved several questions he had. “The best thing we can continue to do is move forward,” he said.

“We need to heal our planet, stop poisoning it with fossil fuels,” said Mr. Van Scoyoc, while also addressing increasing demand for electricity on the South Fork. The wind farm’s developers say that it will provide electricity sufficient to power 70,000 houses of average size. Potential adverse impacts and remediation has been addressed in the agreements, he said, and the P.S.C. deliberations are providing robust review of all aspects pertaining to components of the wind farm that would lie in state waters and in the town.

The town and the trustees, who are expected to soon vote on their own, separately negotiated agreements with the developers and will continue to actively review the project, Mr. Van Scoyoc said.

With respect to the vote on the host-community agreement, Mr. Bragman emphasized that he is both cognizant of the climate emergency and a believer in wind power, but also what he said were lingering unanswered questions with respect to the wind farm’s impact on Cox’s Ledge, a “tremendously valuable ecosystem,” damage to which could detrimentally impact the town’s commercial fishing industry.

During his lengthy comments, Ms. Burke-Gonzalez interrupted him, angrily accusing Mr. Bragman of “deliberately confusing people and mixing and matching” respective aspects of the project that are subject to state and federal review. “This project is for the landing of the cable,” she said. “This easement is for the infrastructure to go from under the beach at Beach Lane to Cove Hollow. Because we can’t meet our summer peak demand here.”

“You cannot segment or put blinders on and say all we’re doing is granting an easement,” Mr. Bragman countered. “The easement is the effectuating mechanism for the project as a whole.” Concerns about Cox’s Ledge and the potential disruption of nearshore fish species’ migratory patterns, which has also been raised by the wind farm’s opponents, remain unresolved, he said. The easement “is not a small piece that can be looked at on its own.”

“We know that anything that you do or build anywhere has some sort of impact” and must be carefully assessed, Mr. Van Scoyoc said. The town and trustees will continue to lobby for protection of commercial fishing interests, he said, “but to somehow say that we should wait and try and leverage our approval for the landward portion, when we’ve received comment from our community -- the community has let us know that they want this.” He is aware of objections from Wainscott residents, he said, but the benefit of clean, renewable electricity to 70,000 houses outweighs the temporary inconvenience of off-season construction and the manhole covers the developers assert will be the sole lasting impact on Wainscott.

Mr. Bragman said after the meeting that until the public service commission has completed its review and rendered a verdict, “we should not be granting the easement because we’ll learn more as we go along.” The same applies to the Bureau of Ocean Energy Management, he said. “Wait and participate, then make a decision.”

The Long Island Federation of Labor, the Nassau/Suffolk Building Trades, and Climate Jobs NY quickly issued a statement applauding the board’s actions, calling the votes “a crucial step forward in New York’s progress to harness 9,000 megawatts of offshore wind energy. . . . We are now one step closer in leading the green energy economy and putting thousands of New Yorkers to work with good union jobs.”

"We’re proud of our collaboration with the town to reach easement agreements that not only advance the construction of South Fork Wind but also support the town’s long-term environmental goals," Meaghan Wims, a spokeswoman for the developers, said Thursday afternoon. "We look forward to continuing our partnership as we build this historic first offshore wind farm in New York.”