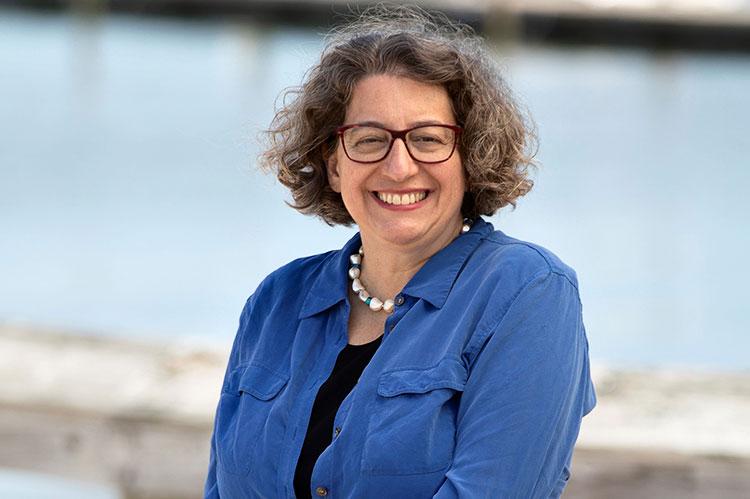 Nancy Goroff said she is “fully committed to keeping Suffolk safe. That’s why I oppose defunding the police and in Congress will fight to ensure local law enforcement, public safety, and social services have the resources they need to protect our communities.”
Goroff Campaign
By Christopher Walsh

On Friday, the Cook Political Report announced that it had changed its rating of 15 campaigns for the House of Representatives, 11 of them in Democrats' direction. Among these was New York's First Congressional District — where Nancy Goroff, the Democratic Party nominee, is challenging Representative Lee Zeldin, who is seeking a fourth term. The Cook Political Report moved its rating for the district from "likely Republican" to "lean Republican."

"We've now shifted 46 (!) House ratings in the past month, including 40 towards Ds," David Wasserman of the Cook Political Report said on Twitter. While the organization's rating remains in Mr. Zeldin's favor, Ms. Goroff, who is on leave as chairwoman of Stony Brook University's chemistry department, hopes that the trend portends another "blue wave" election such as the 2018 midterms, in which Democrats regained a majority in the House, scoring a net gain of 41 seats.

In an interview on Friday, Ms. Goroff cited her Republican opponent's steadfast support for President Trump, whose actions she repeatedly called shocking. The Covid-19 pandemic, "foreign policy by tweet," and the president's statements about Senator Kamala Harris, the Democratic Party's nominee for vice president, demonstrate that he is unfit for the office, "and the lack of condemnation is striking," she said of Mr. Zeldin. "But it goes well with his general fealty to the president and efforts to ingratiate himself, which have been successful. It's all of a piece."

She cited Mr. Zeldin's Aug. 2 post on Twitter that included a video depicting protesters burning a Bible and an American flag, identified as taking place in "Portland, United States," and Mr. Zeldin's message, "These people setting fire to a bible and a US flag and chanting 'f*** Trump' want to chart our country's policies, values, and future."

The video depicts what Mr. Zeldin describes, as well as a graphic identifying its source: Ruptly, the Kremlin-backed video news agency of the RT news outlet, formerly Russia Today. It gained traction on social media, The New York Times reported, after it was retweeted with the message "Left-wing activists bring a stack of Bibles to burn in front of the federal courthouse in Portland," for which there is no evidence. The video, said The Times, "represents the Russian disinformation strategy at its most successful. Take a small but potentially inflammatory incident, blow it out of proportion and let others on the political fringes . . . spread it."

"It shows that if Lee Zeldin sees something that matches the narrative, he cares more about that then whether it's true or not," Ms. Goroff said. "It didn't take any effort to see that this was Russian propaganda, and he used it to impugn peaceful protesters everywhere.
. . . It's shocking to have our representative so enthusiastic about Russian propaganda."

Through a spokeswoman, Mr. Zeldin said it was "alarming" that Ms. Goroff "is not at all concerned about people rioting in cities across America, attacking police, burning the American flag, and far more, that our adversaries are using it against us." Ms. Goroff's "radical agenda includes defunding the police," he said.

Ms. Goroff replied that "As a mother of two daughters, I'm fully committed to keeping Suffolk safe. That's why I oppose defunding the police and in Congress will fight to ensure local law enforcement, public safety, and social services have the resources they need to protect our communities. Zeldin knows I'm against defunding the police and rioting but this is his campaign mantra -- to spread fear and lies -- voters are smarter than this and won't fall for it."

Ms. Goroff also pointed to Mr. Zeldin's July 3 tweet about hydroxychloroquine as a treatment for Covid-19. "The president touted this early," Mr. Zeldin wrote, "so people who don't like him wanted it to fail in every way." Two days earlier, the federal Food and Drug Administration had announced a review of the drug as a treatment, including "reports of serious heart rhythm problems and other safety issues, including blood and lymph system disorders, kidney injuries, and liver problems and failure."

"It is shocking to me that we would have a president, and our representative, in support of an unproven medicine which has serious side effects and is also needed for other medical conditions," Ms. Goroff said. "Patients with lupus rely on hydroxychloroquine, and suddenly couldn't get it. We have a president saying, 'You might as well try it, what's to lose' on something that has known, documented, serious side effects for the heart." (Mr. Zeldin's spokeswoman said that his point was that "treatments being studied shouldn't be given political party registrations during the process.")

Ms. Goroff spoke at length about the federal response to the pandemic, in which some 5.5 million Americans are known to have been infected and more than 172,000 have died. "This was clearly an international problem," she said. "Working together and actually leading an international response, as opposed to just ignoring it first, then closing the border with one country" Ñ China Ñ "when we know most cases coming to New York were coming from Europe, not Asia" should have been the response, she said. "There was such a lack of leadership. Contrast it with what the Obama administration did on Ebola: leading an international response with plans for how we make sure that where it is already on a rampage they have the resources they need to tamp down the infections, and we as an international collection of countries -- all of whom have an interest in keeping this pandemic under control-- prevent its spread to countries where it hasn't gone yet."

Testing and manufacture of personal protective equipment were also slow and poorly carried out, she said. "Essentially, instead they ignored it, and the president was saying it was going to magically go away. It was clear at that time to people who were looking at the data that it wasn't going to magically disappear." There should have been "clear leadership from the White House" about wearing a face covering, she said. "Even today, people think wearing a mask is a political statement. . . . It's unconscionable."

"The continued misinformation campaign from the Trump administration, echoed by Zeldin, certainly does motivate us," she said. "Trying to attack the post office because they don't want people to be able to vote is certainly high up there. I never thought we would get to a place where a president would be willing to say he doesn't want to fund the post office because if it's working properly people will be able to vote that way. We're not talking about dog whistles anymore."

The candidate called former Vice President Joe Biden's selection of Ms. Harris as his running mate a "terrific" choice. "It's really important that we have diversity in our leadership, across all dimensions, but certainly having a woman of color and one who is as qualified as Kamala Harris as vice president will be outstanding," she said. "I was really struck in her comments and in Biden's with how much they were focused on, as she said, 'prosecuting the case' against Donald Trump, based on facts and how he turned his back on science. I think it's exactly the same message that we have, that this administration and our representative, Lee Zeldin, have turned their backs on the facts. And especially, in our current health care crisis, they have made things so much worse. They have cost people's lives by trying to solve problems with political spin, instead of finding real solutions to the problems."