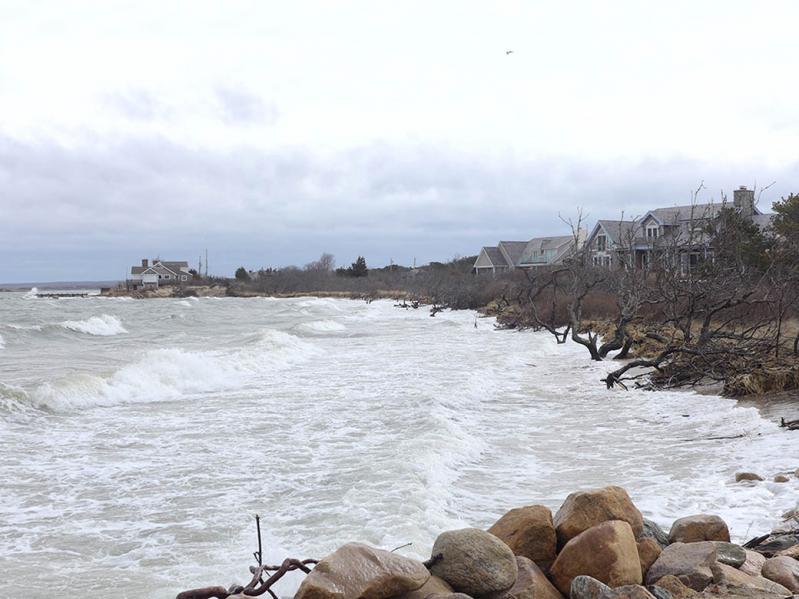 The East Hampton Town Trustees, meeting by videoconference on Monday, heard a proposal by four Amagansett property owners to remediate erosion of a beach off Lazy Point Road. Their houses lie just east of Mulford Lane, where the beach on Gardiner’s Bay has been eroding at a rate of several feet per year for decades.

The process being considered would see 32 tubes driven vertically into the sand and left there for at least three years.

Kenneth Christensen, president of the engineering company EcoShore International, and Mark Laska, a managing partner at Eco Endowment Solutions, described an array of pressure-equalizing modules, or PEMs, that they said would improve beach drainage, allowing more sand to be deposited on the beach rather than pulled away by waves.

Elevated beach groundwater promotes erosion, they told the trustees, whereas a lower water table promotes the onshore accumulation of additional layers of sand. Elevated beach groundwater is caused by impermeable or semi-permeable layers of sand and extra water pressure. At Lazy Point, there are marshlands near the beach and irrigation at the adjacent properties, meaning, Mr. Christensen said, that “you have extra water pressure because you have wetlands, so you constantly have pressure, which adds to a wet beach.”

He held up a PEM, showing a hollow tube made of high-density polyethylene with slits along the sides and a vent in the top. When installed from the dune to the mean low water line, he said, the tubes connect a beach’s layers, allowing water to enter from all layers. During falling tide, the water inside a PEM will exit via the layer with the least resistance, typically a coarser layer. The vent in the top allows air to enter, replacing the water that exits the beach, equalizing the pressure.

Accretion of sand would be “a huge win,” Mr. Laska said, but the project should at the very least halt further erosion.

The system has no adverse impacts, Mr. Christensen said, and works even better during storms. It is easy to install and remove, he said, and is invisible to beachgoers.

One of the applicants, Chris Anderson of 619 Lazy Point Road, was at the meeting. “We’re facing a really serious threat of erosion,” he told the trustees. “Probably another four or five years and we lose the house.” The possibility of reclaiming the beach in an “earth-friendly” manner, he said, was “very exciting.”

Mr. Laska estimated four rows of PEMs, eight per row, spaced approximately eight feet apart. Installation would take around five days, he said, and no sand would be excavated or removed. Reports would be submitted annually, and data and anecdotal observations would likely be collected on a biannual basis. He offered to post a camera to provide real-time information.

The property owners would bear the cost of the project. “I think the way that we’d urge you to look at this is that there’s no certainty this will succeed in reversing erosion and accreting sand,” Mr. Anderson told the trustees, “but a strong chance, we believe, that it will.” If it does not work, “We, as part of our program, will make sure we leave no footprint. It will get reversed.”

Mr. Laska and Mr. Christensen cited a 2008 project in Hillsboro Beach, Fla., in which 90 PEMs were installed. After 18 months, they said, the project had met the criteria for success: Erosion was halted, the sand was accreting, and the beach was higher and wider than before.

“After three years, we should have a good idea of what’s going on,” Mr. Laska said. “The intention is, if we’re seeing a halt to erosion, we’d have no reason to remove the PEMs and would keep them in place if we see accretion. . . . Give us three years to figure out what’s going on.”

No trustees voiced opposition to the proposal, and several said they would support it. Jim Grimes, a deputy clerk of the trustees, said they would delay a vote while the application is still before the other permitting agencies. “Mark, if you get the affirmative from the D.E.C., the Army Corps, or the Z.B.A., please come back to us,” he told Mr. Laska. “We’d be prepared to act on this in a very timely manner.”