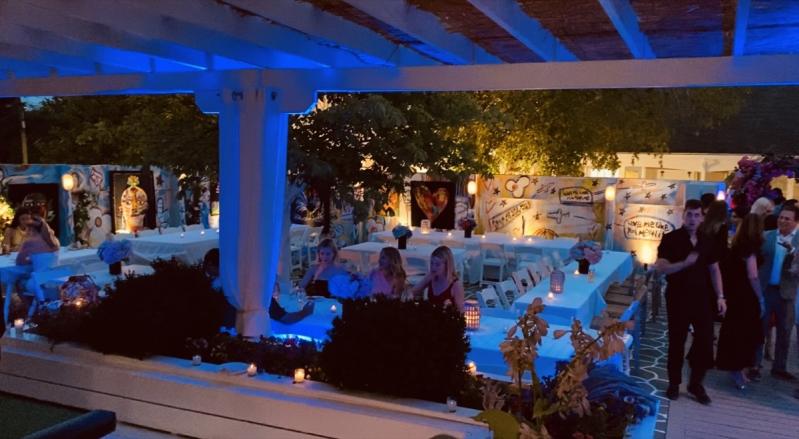 Kyma is coming to the Capri hotel as part of a collaboration with NAIA.
By Jennifer Landes

Pop-Ups Still Popping
For two nights only, Kenta Goto will bring drinks and plates from his Lower East Side and Brooklyn bars to Rita Cantina in Springs on Saturday and Sunday. There will also be collaborations such as a Japanese-infused margarita, which will be available on draft following the pop-up for a limited time. Other offerings of note are the Far East Side, Koji-san, and Ume Paloma, plus miso chicken wings with kombu celery. The restaurant will have its usual selection of seasonal margaritas and coastal Mexican dishes. The restaurant recommends reservations at its website.

At Sylvester and Co. in Sag Harbor, Dana Pollock's cookbook will be on offer along with her Dana's Bakery macarons, vegan black-and-white cookies, and "mookies," which are cookies stuffed with macarons, through the month of August.

Seafood Boil
Thursday at 5:30 p.m. the North Fork Table and Inn in Southold will have a seafood boil on its lawn in partnership with the Mount Gay rum distillery. A reception with canapes will be followed by a seated dinner catered by GoFish with a three-course sustainably sourced menu and cocktail pairings. The price is $150 per person with donations made to 4ocean, which sells bracelets made from recycled materials, using the proceeds to fund the removal of trash from the ocean and coast. Each guest will also receive a bracelet.

NAIA Plus Kyla
The Capri hotel in Southampton, which has partnered with NAIA to run its poolside "beach club," will extend its summer program further with NAIA's single-night collaboration on Aug. 20 with Kyma, a Mediterranean restaurant with Manhattan and Roslyn locations.

A $95 prix fixe menu will be offered in the hotel's restaurant and on its deck. A D.J. will spin music appropriate for dining and then kick it up a notch for dancing it off afterward.

The menu will feature fresh fish flown in from the Mediterranean, extra virgin olive oil, and classic Greek dishes. Also on offer is a seafood tower for pre-order at $200. The fixed menu consists of appetizer, entree, and dessert courses. Highlights are a crudo sampler, a choice of three family-style appetizers such as traditional spreads with pita, salads, octopus, and meatballs. Tuna tartare and fried zucchini chips and tzatziki are available for a $10 supplement. The entrees are grilled branzino, lamb chops, a kebab with filet, chicken souvlaki, and yellowfin tuna. Lobster pasta and diver sea scallops are offered with a supplement.

Dessert for the table will include small versions of baklava, Athenian kokakia, chocolate choux, and fruit.

Reservations are essential and can be made through [email protected].

Taco Tuesday and Wine
Wolffer's Wine Stand will have live music and food by the Mattitaco Food Truck on Tuesdays through August. The menu includes esquites (Mexican street corn), watermelon salad, and a number of tacos featuring shrimp, cauliflower, carne asada, chipotle chicken, corn and tomatoes, and bacon and lobster.