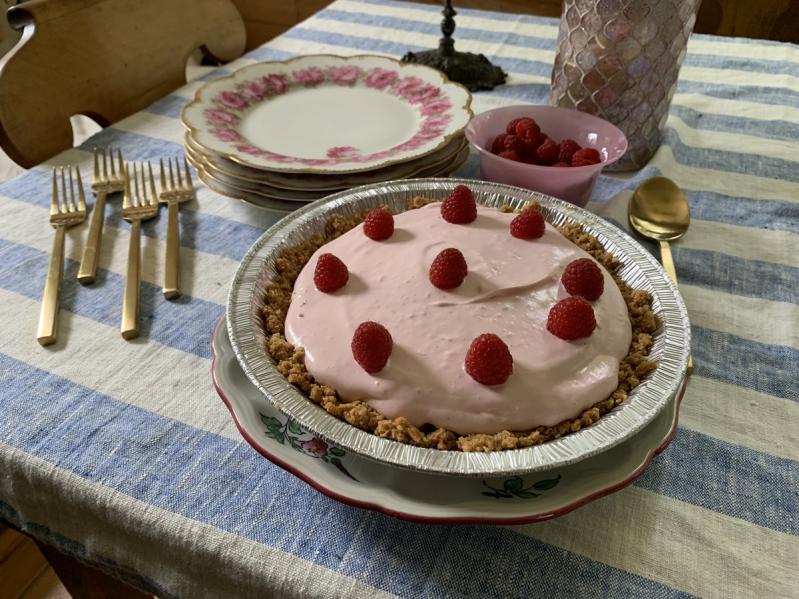 A frozen pink lemonade stand pie can go low, with Cool Whip and a prepared graham-cracker crust, or high with homemade ingredients, but either way makes a refreshing end to a summer dinner.
Laura Donnelly
By Laura Donnelly

We all love a fruit pie this time of year, in these swamp days of summer. It is the ubiquitous grab 'n' go dessert for dinner parties. Making them yourself is time consuming and expensive, and you'll heat up your kitchen baking them.

There are plenty available locally, from the grand (Loaves and Fishes and Carissa's) to the moderately priced (Blue Duck and Tate's). The dedicated pie aficionado will even make the drive to Riverhead for pies from Briermere Farms, which are old fashioned, full of fruit grown on the farm, with a crumbly crust made the way it should be, with lard or vegetable shortening mixed in with the butter. These will cost you $20 to $38. Plus gas.

Here's an idea. Why not make a frozen pink lemonade stand pie, a French nougatine (similar to the Italian semi-freddo), a lemon ice box cake, or ice cream "lasagna?" These can be made well in advance, won't heat up your kitchen (except for a few minutes for the puff pastry lasagna sheets), are economical, and you'll be giving your friends and family a wow dessert to finish the meal.

I came upon the pink lemonade stand pie recipe on the back of the lid of a tub of Cool Whip. Don't scoff! Cool Whip is delicious in its non-dairy, vegan, unctuous way. The recipe utilizes a pre-made graham cracker crust, softened ice cream, Cool Whip, and frozen lemonade concentrate. I realized that this could be made almost as easily from scratch with a homemade crust, fresh juice, and whipped cream. It is a sweet-tart refreshing end to a light summer supper.

Who came up with the first frozen desserts? Some sources say it was the Chinese in 3000 B.C.E. They would gather snow or ice and flavor it with fruit juices. Emperor Nero is said to have sent his slaves up into the mountains for snow that would be enhanced with nectar, fruit pulp, and honey. Ice creams and sorbets were probably invented in the late 1600s.

From the simple to moderately complex, these frozen desserts are sure to please. Make more than one at a time and keep them in your freezer for spontaneous occasions.

Don't have the time or inclination to put these together? Then do what the late great food writer and bon vivant Julia Reed recommended for the harried hostess. Always have lemon sorbet and Bordeaux cookies on hand!

Pink Lemonade Stand Pie
The original pink lemonade stand pie recipe is as follows, with my homemade version after.

Beat concentrate in large mixing bowl with electric mixer on low speed for about 30 seconds. Gradually spoon in ice cream; beat until well blended. Gently stir in whipped topping until smooth. If necessary, freeze until mixture will mound. Spoon into crust.

Freeze four hours or overnight until firm. Let stand at room temperature for 30 minutes or until pie can be sliced easily. Serve with strawberries or raspberries.

I find that using a disposable aluminum pie tin works best for frozen or chilled crusts, they will stick to glass or ceramic tins.

1 packet (there are three per box) graham crackers, crushed into crumbs (I do this in  Ziploc baggie.)
5 Tbsp. butter melted
1/2 cup fresh lemon juice with 1/4 cup sugar dissolved into it (Add a few drops of red food coloring to achieve pink hue.)
1 cup heavy cream, whipped to 2 cups
2 cups softened vanilla ice cream of your choice

Combine lemon juice with softened ice cream, then fold in whipped cream. As stated in the previous recipe, put this in freezer if it is too loose, you want to be able to mound this into the pie tin, not pour it.

Garnish with raspberries before freezing if you like, or garnish with berries after taking out of freezer to serve.

Freeze four hours or overnight. Remove from freezer 30 minutes before slicing and serving.

French Nougatine
I got this nougatine recipe years ago from a fellow East End pastry chef. You can also find it on the Food Network's "Barefoot Contessa," season seven, episode three, titled "Fruit All Ways." Ina Garten modified the recipe a bit with the addition of almond extract and Framboise, a raspberry liqueur added to the berry topping.

Line a large bread loaf pan with enough plastic wrap to be able to fold over the top once filled.

Whip one cup sugar with heavy cream and vanilla and a pinch of salt until stiff peaks form. Fold together in a large bowl, then gently add the nut praline. Pour into loaf pan, fold over excess plastic wrap, and freeze until serving time.

To serve, remove plastic-lined nougatine, slice, and serve immediately. It will be quite soft but holding its shape. Top with berry sauce, below.

Cook raspberries, sugar, and zest in non-reactive pot about 10 to 15 minutes. Strain and chill. You can also add about one teaspoon cornstarch dissolved in water to the cooking berries if you prefer a thicker sauce.

Ice Cream Lasagna
I found this recipe in an issue of People magazine 2018. It would be fun to play around with the ice cream and fruit variations.

On a lightly floured surface, roll each puff pastry sheet into a 9-by-13-inch rectangle. Place each sheet onto baking sheet lined with parchment paper. Brush with one tablespoon water, and sprinkle evenly with sugar. Pierce each sheet with a fork to prevent it from rising too much. Bake until dark golden brown, about 18 minutes. Cool completely.

Place one cooled pastry sheet in a 9-by-13 baking dish. Spread half of ice cream mixture over pastry, then top with half of the mangoes, strawberries, and pineapple. Repeat using remaining pastry sheet, ice cream mixture, and fruit. Sprinkle with the toasted coconut, cover and freeze at least two hours before serving.

Mashashimuet Park's History and Future
A Conference for Young People to Create Solutions
Get Outside, Get Moving
END_OF_DOCUMENT_TOKEN_TO_BE_REPLACED