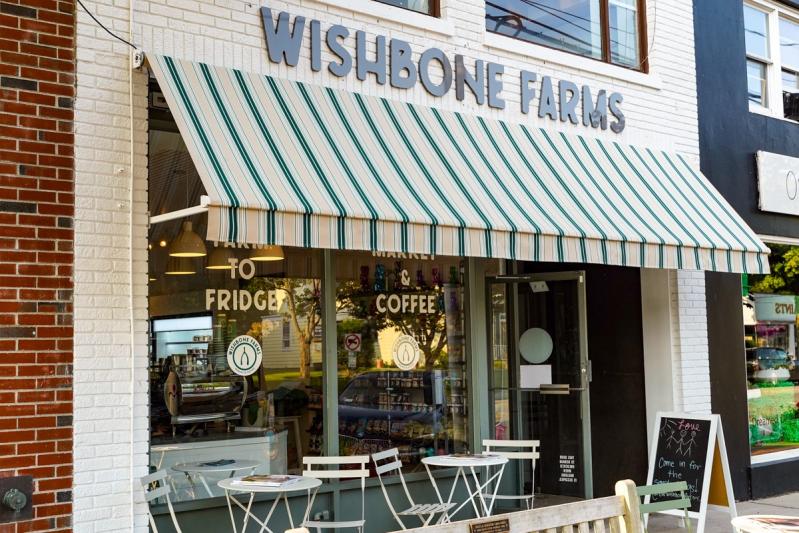 Wishbone Farms in downtown Southampton has plenty of prepared meals that will fit in well with new year's resolutions to eat better.
Sean Zanni
By Christine Sampson

The prepared foods one might find at Wishbone Farms in Southampton Village are noteworthy not just because of their tastebud-pleasing ingredients, but also because of the ingredients that aren't there.

"Our general thesis, when it comes to making food, is that if it's not necessary, we won't add it," said Josh Lebowitz, a co-owner of the take-away eatery on Hampton Road. "For example, meatballs: If you're gluten-free, you'll have an issue because there are generally breadcrumbs in it. It doesn't add anything to the flavor, so we'll add oat flour. . . . Restaurants cook with more butter and salt, but we don't."

Wishbone Farms opened in mid-June in 2021 as a response to a pandemic need that Mr. Lebowitz and Eva Pesantez, his sister, along with a few friends who also had a hand in opening the shop, described as "an easier resource for high-quality, chef-driven prepared foods" that will save people time in the kitchen.

"We're never going to compete with a supermarket in terms of staples. Where we do compete is when you want to get more nuanced items and smaller-batch and more artisan ingredients," Mr. Lebowitz said.

Those who maintain vegetarian, vegan, or gluten-free lifestyles will find plentiful options at Wishbone, where nearly every standard menu item qualifies as one of the three (or more than one). But that wasn't a conscious choice, Mr. Lebowitz said.

"It was kind of by accident," he said, explaining that he and his family "eat this way" already. "There is so much great cooking that can be done with vegetables."

That means dishes like eggplant and mushroom meatballs over spaghetti squash or a shepherd's salad with grilled tofu, in addition to several dishes with chicken, seafood, and beef. Much of the menu is created by Ms. Pesantez, who cooks with destination in mind.

"It has to be able to translate from shop to home," she said. "Is it something that's going to be heated up? It needs to make sense. . . . It's about preparing foods that are fresh and in-season, using whatever's growing locally. That's how I guide my menu seasonally."

There's also a coffee bar featuring homemade flavor syrups like lavender-honey and vanilla and a version of those turmeric lattes that are so popular these days. Egg sandwiches and pastries like scones, croissants, and muffins also make an appearance in the mornings. And then there's dessert, which, theoretically, could also be breakfast.

"I just made some banana butterscotch bread pudding, so that's on top of my list right now," Ms. Pesantez said when asked her favorite menu creation. "It depends on the weather, the time of year. There are periods of time when I just want fish and vegetables. Right now I'm really into meat -- it just feels like it's going to keep me warmer."

There's no actual farm yet attached to Wishbone Farms, "but I've been looking," Mr. Lebowitz said. "Obviously there aren't that many places you can do it, but the North Fork is one of them, so I'm looking to add that to the mix."

The South Fork community has been kind to their business, he and Ms. Pesantez said.

"I love feeding people. I want to make food that people want to eat," she said. "We're a small team, but we really like doing what we do, and we like doing it here, too."