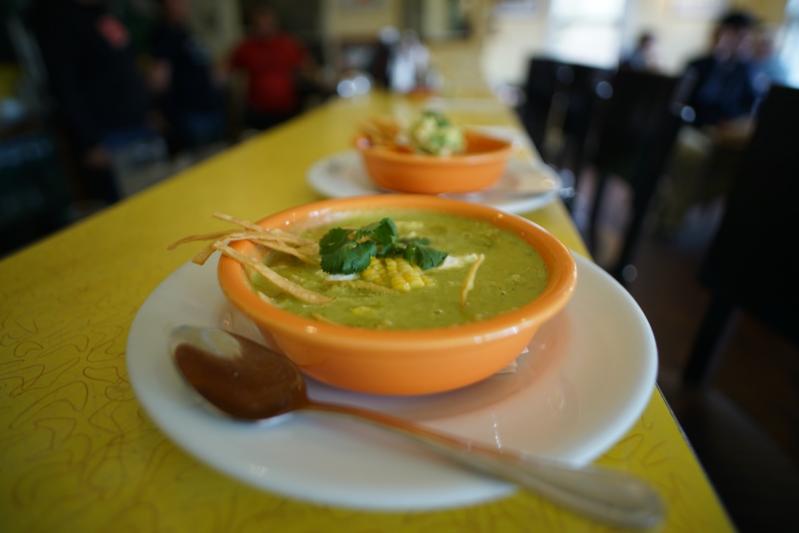 In reaction to rising prices, restaurants are taking some things off their regular menus and making them specials instead. Some staples remain despite the cost, however, such as Estia's Mexican sweet corn chowder.
Colin Ambrose
By Christine Sampson

If skirt steak makes you salivate, but you're having a hard time finding it on the menu at popular local restaurants like Coche Comedor and Estia's Little Kitchen, there's a reason why: Its wholesale cost has risen dramatically, meaning it makes less sense for a restaurant to keep grilling it up every night. Instead, such a cut might make an occasional cameo as a special rather than a staple, like Estia's is doing now, or it might have been replaced altogether by a New York Strip, like at Coche.

"It's been a complete nightmare, from fryer oil essentially doubling in price to skirt steak three times the amount it was, and being short constantly on items," said Joe Realmuto, executive chef of the Honest Man Hospitality Group, which owns Coche Comedor, Nick and Toni's, Townline BBQ, La Fondita, and Rowdy Hall.

"I'm paying almost $5 a pound for chicken wings," for the Rowdy Hall menu, "and $2 for whole chickens, which is the complete opposite of what it should be," he said. "We did have to adjust our menus accordingly, and things that we couldn't adjust, we stockpiled so we didn't get caught short. We pivoted our menus the way I think most restaurants did -- basically cut back our selection and kind of streamlined it a lot."

Skirt steak and reasonably priced chicken wings aren't the only local casualties of pandemic price increases and supply-chain delays. Smoked short ribs disappeared from Townline's menu, for example, and that particular restaurant now has a stockpile of at least $1,000 worth of ketchup, because that's a key barbecue sauce ingredient that has been hard to find. The circumstances have also led to other creative adjustments, such as a new, cost-sensitive recipe for avocado salsa that incorporates tofu at Estia's Little Kitchen (don't worry, its usual guacamole is still available).

"We removed one-third of our menu through the process of tightening things up," said Colin Ambrose, who owns Estia's. "It was also about packaging and reduced hours of service. At the end, it was eye-opening -- we saw that we could do it."

There are some dishes, though, that are non-negotiable, despite the rising price of ingredients. At Rowdy Hall, it's the fish and chips. At Estia's it's the Mexican sweet corn chowder. "It's expensive, but I stay with it because it's one of the branding points for us," Mr. Ambrose said. "Salads, burritos, soups -- the price points mean we have to either let it go or make it a special."

Indeed, the Wall Street Journal recently reported that this is a trend across the nation. "A lot of restaurants are trying to keep the quality, not quantity," Sean Jafar of the food-industry research service Datassential told the Journal.

Some spots are less prone to fluctuations than others, Mr. Realmuto said. "The nice thing about Nick and Toni's is we have an ever-changing menu [based] on seasonality. There are only a few items that we're locked into that have been on the menu forever -- zucchini chips, Caesar salad, chicken, penne, tartufo, biscotti. Everything else I have flexibility to adjust to what's available."

"Vegetables still tend to be your smartest choice. . . . I don't want to say a whole vegetarian menu -- but put some vegetable items on there and work that in to help your plate costs," he said. "It definitely helps."

Fish is also floundering. "I order less. I want to make sure I sell every single ounce of fish we bring in," Mr. Ambrose said.

Jason Weiner of Almond, which has locations in Bridgehampton, New York City, and Palm Beach, Fla., has noticed the trend of shrinking restaurant menus himself.

"We've done a little bit of it -- not in Bridgehampton, but at the other ones," he said. "Our menu wasn't already that big and we change it constantly, so it allows us to get away with doing a small-ish menu anyway." The city restaurant's upstairs pizza kitchen took a hit, and it is spending way more on necessities like olive oil and even the votive candles that set the mood on the tables.

But that could serve as a model, particularly in these times. "Changing things up a lot is a way to get around that," Mr. Weiner said.

A Holiday Gift for Surfers and Beach Lovers
Holiday Lights Go On at the Lighthouse Saturday
Covid Vaccine Clinic at St. Luke's
END_OF_DOCUMENT_TOKEN_TO_BE_REPLACED