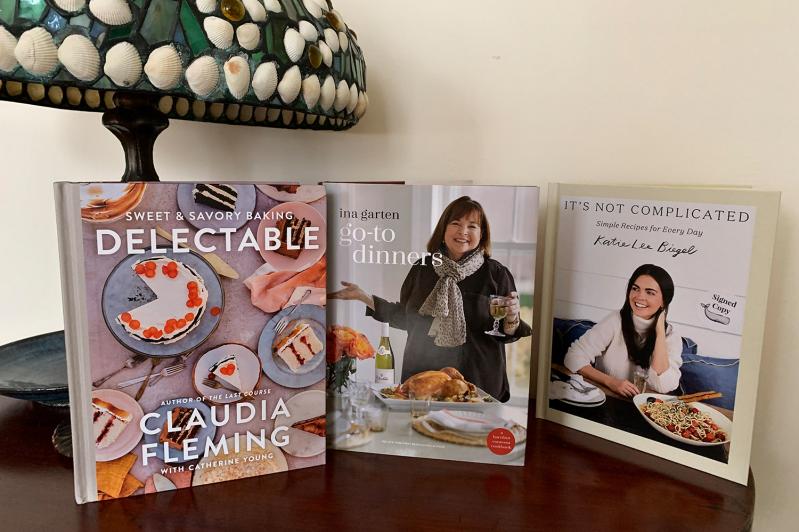 Just in time for holiday gifting, there are a few new cookbooks by local authors on the market.
Laura Donnelly
By Laura Donnelly

Claudia Fleming's first books since the 2001 publication of "The Last Course: The Desserts of Gramercy Tavern" is titled "Delectable" and it is a serious deep dive into all sorts of sweet and savory baking. Ms. Fleming has worked as the pastry chef for Union Square Cafe, Montrachet, TriBeCa Grill, Gramercy Tavern, and Fauchon in Paris. With her late husband, Gerry Hayden, she opened what was and still is considered by many to be the best restaurant on Long Island, the North Fork Table and Inn in Southold.

In her introduction, she reflects on how the pandemic impacted her life. She was already working on this book and was certainly empathetic to her friends still in the restaurant industry, but found solace in perfecting aspects of baking and got joy from delivering her focaccias and crostatas and more to various friends and neighbors in lockdown.

This book is very thorough and technical, the measurements are given in both the metric system and our usual American pounds and ounces. Besides the mouthwatering photos of the finished products, there are instructional pictures of such things as cooking sugar through various stages, how to fold a crostata dough over its filling, buttercream tips, rugelach assembly, and more. And she did all this working with an electric stove. Gasp!

She reminds us that baking is a more precise science but one that is deeply rooted in other cultures, ancient history, and our sense memory.

"The opportunities for transformation are more extreme, and margins thinner when you are playing with flour, sugar, and eggs. That test of skill draws me, but alone it has never been enough. I want to touch people with my cooking, to strike resonant chords," she tells us in the introduction. This she does, from the homemade version of her father's favorite cookie, the Mallomar, to Eastern European kiffles to exotic yuzu panna cotta.

The first chapter is all about morning baking, quick breads, muffins, scones, biscuits, and yeasted breads. Some are simple and familiar, like good ol' blueberry muffins. Some are more complex like chocolate babka buns and sweet potato rolls with miso.

The second chapter is all about cakes and doughnuts along with their frostings and toppings. If you've ever been intimidated or mystified by meringues and buttercream, Ms. Fleming is here to help, explaining step by step and guiding you to success. The next chapter focuses on all manner of cookies, from "European inspirations" to American classics like fig bars, oatmeal cookies with sour cherries, and maple shortbread. From there the chapters are pies, tarts, and cobblers, various doughs, savory vegetable tarts, kiffles, pretzels, custards, fruit, and lastly a whole chapter on pantry staples. One should probably read this last chapter first to be prepared for what is to come. Sugared nuts and crumble toppings are the kind of ingredients you can have on hand to quickly finish a fruit tart or crisp cobbler.

Seasonality is always foremost in her mind when cooking, whether it's utilizing spring berries and vegetables to summer stone fruits to apples and in the colder times of the year.

Ms. Fleming's desserts in the many illustrious restaurants she has worked in have always been unique and creative assemblages of various elements, a silky cold custard may be topped with a warm fruit compote and a crisp cookie standing sentry on the side of the bowl. They are visually stimulating before you've even taken a bite.

This tome of technique will most assuredly educate you, give you confidence, and leave you, like Claudia Fleming in the very last photograph in "Delectable," licking the Italian meringue frosting from an offset spatula as you admire your airy white cake with plum filling.

If you are fan of Ina Garten, the Barefoot Contessa, then of course you should buy this latest book, "Go-To Dinners," her 13th.

It's probably safe to say that all of us are fans, but is this book her finest, one in which you will dog-ear many pages, recommend to friends, and turn to again and again?

There are enough references to the pandemic throughout to make you want to curl up under a blanket.

The cover is comfortably familiar. There is Ina with a table scape of orange flowers and a roast chicken. The chapters run in order of drinks and apps, "breakfast for dinner," light dinners, family dinners, vegetables and sides, and desserts. The little headnotes before each recipe are cozy, often referencing the source or inspiration for the recipe that follows. At the bottom of each recipe is a helpful word or two in red ink to let you know that the recipe is "easy," or can be "assembled ahead" or "prepped in advance."

Some recipes are repeats from previous books or her television show, like hummus or panettone bread pudding. Two dishes get the cacio e pepe treatment. That's cheese and pepper.

At the beginning Ms. Garten tells us she never liked leftovers because they don't taste as good as a freshly prepared dish. But every cook knows that a stew, chili, tagine, or coq au vin tastes far better after a day or two in the fridge, allowing the flavors to meld. She encourages the use of store-bought items like frozen creamed spinach, frozen pie dough, Rao's tomato sauce, and rotisserie chicken. This may have led to The New York Times asking her how to make a Thanksgiving feast recently, using store-bought ingredients. When I saw the package of Bob Evans mashed potatoes on her counter, as she assured us that once you add Parmesan cheese and other bits and bobs, it will taste just like homemade, I blanched. Wouldn't it be better to just suggest getting some mashed potatoes from your local deli? The Bob Evans products contain vegetable oil-lipids (margarine).

The concept of "breakfast for dinner" is new to Ina but it's likely that every harried parent or college student has resorted to breakfast for dinner many times. There are scrambled eggs, croissants stuffed with smoked salmon, oatmeal, avocado toast, and more egg recipes in this chapter.

The chapter titled "Light Dinners" is not so much. Hot dogs wrapped in puff pastry are a light dinner? Potato salad a la Julia Child laden with mayo and sour cream? Some recipes are not much more than: lay some melon slices on a plate and drape them with prosciutto. That's not a recipe, that's a sentence.

The book almost seems more like a simple primer for cooking basic things rather than another creative and original addition to the Barefoot Contessa's oeuvre. But for the fans and collectors among us, it will still be added to the colorful lineup on our bookshelves , even if only as a reminder that the pandemic was hard on all of us and cooking became a bore and a chore.

The title of Katie Lee Biegel's new book "It's Not Complicated" is an admitted nod to one of her favorite movies "It's Complicated," by one of her favorite directors, Nancy Meyers. Even her clothing throughout the book is creamy white a la Diane Keaton in "Something's Gotta Give." Gone are the daisy dukes and sexy poses of her first book "Endless Summer Cookbook," published in 2015. Perhaps the ensuing years of cohosting "The Kitchen" on the Food Network, getting remarried and having a baby, and just life experience have made her into an engaging and cozy cookbook author.

The recipes are indeed simple but there are plenty with a creative twist that look worth trying. Let's start with an iced peach bourbon lemonade tea, please. Bruschetta or bacon-wrapped water chestnuts are nothing new, but the dainty crab toasts with lots of fresh herbs and a whisper of Fresno chilies should get your attention. Hummus is everywhere but Katie Lee Biegel's has pumpkin and ginger blended with the usual suspects, garlic and lemon. Celery stuffed with cream cheese is an old school snack, but she suggests sprinkling some "Everything Bagel" seasoning on it, yowza!

In the salads and soups chapter, the shaved Brussels sprouts salad jumped out, with its Spanish-style additions of Manchego cheese, almonds, and chopped dates. Grilled tuna with miso-carrot ginger dressing sounded appealing, as did the chipotle carrot soup, healthy dishes with zing and zest.

There are more burgers, simple pastas, and chicken recipes, but some have a new twist that stops you from turning the page. Many of the recipes sound healthy (heavy on the vegetables, thank you very much) and the sweet potatoes with cumin, yogurt, pomegranates, and pistachios is very appealing in a Yotam Ottolenghi way.

Sometimes it's fun to pile some good fixins on a cob of corn. Doesn't crunchy ranch corn on the cob sound naughty and delicious? It's grilled corn coated with homemade ranch dressing, then coated with ranch flavored corn chips.

This book isn't complicated, as promised, and it has a warmth and accessibility to it. The photographs are appetizing, the food styling appealing. And yes, just like a favorite Nancy Meyers movie, it is filled with beachy elements, lots of white and blue, simple but elegant ceramics, and a cozy tone. This book is worthy of a place in your kitchen.