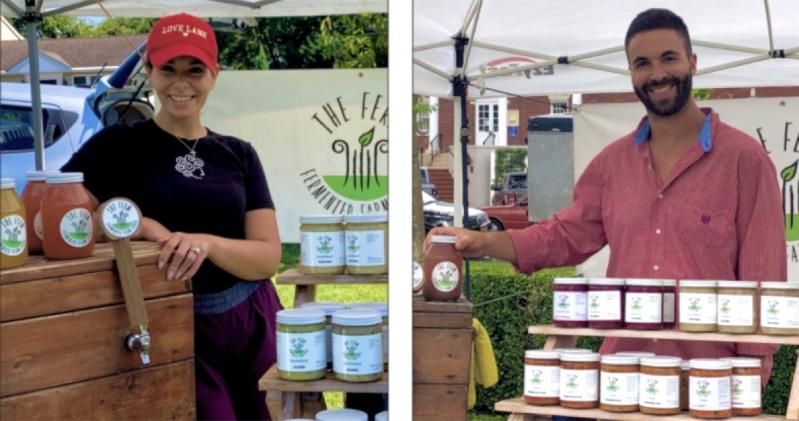 Brianna Hulmes and Joe Hernandez and their fermented food products can be found at regional farmers markets throughout the season.
Jennifer Landes
By Jennifer Landes

In 2015, most people who stopped by Joe Hernandez and Brianna Hulmes's booth at East End farmers markets couldn't say "kombucha," let alone had tried it. Much has changed in six years.

A new understanding that what goes into our mouths can profoundly affect our bodies, for better or worse, has led to a wider awareness of the microbiome and how probiotics can help us lead healthier lives.

While careful not to make blanket claims that their kombucha, kimchi, and sauerkraut can work miracles, the Cutchogue couple behind the company they named The Ferm, did have some of their own positive experience before they launched their products.

"Joe had bad acid reflux and I had eczema that I had struggled with my entire life," Ms. Hulmes recalled. Interested in a more holistic approach to healing, they began drinking kombucha. Mr. Hernandez felt better practically instantaneously and after three months Ms. Hulmes said her eczema was gone. "We've been really passionate about fermented foods in general because we saw firsthand how beneficial they really were."

At the time, they were managers at Harbes Farm's three locations on the North Fork. After taking a kombucha class in Brooklyn with their friends that Ms. Hulmes found on Groupon, they realized they could make a brew that tasted better and didn't need the extra sugar that extended the shelf life of commercial brands. It was also a way to use up excess produce from neighboring farms and harness the unique properties of the area's soil and environment for its residents in a way Mr. Hernandez likened to eating local honey to quell sensitivities to pollen.

They started with $1,500 and the "symbiotic culture of bacteria and yeast" required to ferment the kombucha that had been passed on from the class in Brooklyn. The SCOBY, also known as "the mother," is now seven years old and constantly reinvigorated with apple cider from East End orchards.

They found space in North Fork Specialty Kitchen, just a half mile from their house, after Mr. Hernandez ran into its owner, Jeri Woodhouse, on a neighborhood walk. "We didn't have any real equipment," he recalled, "just a jockey box, which was basically a cooler with some coils in it and a couple of kegs."

"We were brewing in two-gallon glass containers at that point," Ms. Hulmes added.

They now have two 80-gallon and four 55-gallon stainless steel fermentation vessels for the kombucha. Another seven 55-gallon vessels are used for the sauerkraut and kimchi that they added to their product line in 2018 in addition to apple cider vinegar. They serve from five-gallon kegs and sell it wholesale in 16 or 32-ounce glass bottles. At the farmers markets, they sell in quarts, encouraging recycling of the containers through a discount on refills.

Having the Suffolk County branch of the Cornell Cooperative Extension nearby in Riverhead was a tremendous help. Its labs measure their product's alcohol levels, acidity, and bacterial strains, as well as test for pathogens like listeria. As a start-up with very little money and experience, "it was nice to have that infrastructure to tap into," Mr. Hernandez said.

They make a variety of flavors depending on what is in season and what their friends and neighbors at Sang Lee Farms might have in excess that can be added to the mix. One example is the watermelon basil pop-up flavor that resulted last year after picking up 600 pounds of watermelon from Sang Lee's bumper crop. "That was one of the coolest, off the cuff, flavors that we did," Ms. Hulmes recalled.

The primary fermentation of the tea with the culture, yeast, and sugar takes about three weeks. "That's the sweet spot where it eats up enough of the sugar that it's no longer sweet or high in glucose but not total vinegar," Mr. Hernandez said. The secondary fermentation happens after adding whatever they are using to flavor it. That can take another couple of days, and then they bottle it.

From June through November, The Ferm features a kombucha flavor based on what's in season. In June, it's strawberry lemonade using strawberries from Anderson Farm in Riverhead. In July, it's blueberry lavender, courtesy of Briermere Farm in Riverhead and Lavender by the Bay (in Calverton and East Marion). August is peach mint, with mint from their garden and peaches from Woodside Orchards in Aquebogue and Jamesport or Briermere, and backup mint from Balsam Farms in Amagansett if they run out.

Mr. Hernandez presses cider with Woodside, which goes into flavors such as apple lemon, apple raspberry, and then apple cinnamon as they get into October. The cooler months see flavors such as cranberry rosemary and turmeric carrot lemon.

What they have not figured out is a way to translate pumpkin into kombucha. Mr. Hernandez noted, "It can be done, maybe with a delicata or a sweet pumpkin like a cheese pumpkin. We have to figure that out. That's really what we're missing."

Also missing, but on the long-term horizon, are wild yeast beer and biodynamic wines to showcase in a space of their own, where they could serve tapas and fermented food. Their hope is to become a regional draw to highlight the produce and products of the East End.

When business slows down in the winter, Mr. Hernandez said he plans to research how to apply for the farm brewery license and meet with the right people to make sure they approve of the idea. So far, the state officials he's approached with his idea of making probiotic fermented beer have no idea what it is. "No one really does it."

When they started and needed to be licensed, he said the state's Department of Agriculture and Markets didn't know what to make of their product or the SCOBY that created it. "From a regulatory standpoint, it was really strange and they were not very open to it in the beginning." Cornell helped them a lot in that process. Something that's unpasteurized and fermented but doesn't build up alcohol and has colonies of bacteria in it is "the total opposite of what you learned in all of those health courses. . . . We had to kind of pioneer that, so we'll do the same thing with beer and wine."

Mr. Hernandez and Ms. Hulmes sell their products at local stores and farmers markets including those in Montauk, Sag Harbor, East Hampton, and Southampton, which continue through November. A winter farmers market in Riverhead could be revived this season after a break last year due to the pandemic and should be announced soon. Their website is being updated and is under construction; in the meantime, they post updates on their whereabouts and can be found on Instagram @fermentedfarmgoods.